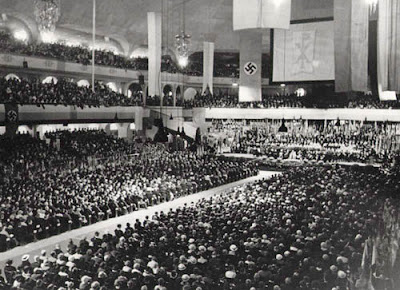 There are a number of expressions and slogans associated with the Nazi regime in Germany which have become commonly known in English.

Thus I was taken aback when I happened to come across the website of the United States Air Force — http://www.airforce.com/ — and saw on its first page a heading “Above all”. Lest you think that this refers simply and innocently to planes high up in the air, this page links to another — www.airforce.com/achangingworld/ — where “Above all” is repeated even more prominently, with links to sites for “Air Dominance”, “Space Dominance”, and “Cyber Dominance”, each of which in turn repeats “Above all”. These guys don’t kid around. They’re not your father’s imperialist war mongers. If they’re planning on a new “thousand-year Reich”, let’s hope that their fate is no better than the original, which lasted 12 years.

The events of recent years indicate that the world is wising up to and becoming less intimidated by Washington’s overarching ambition for world dominance. Latin America is increasingly attempting to escape the empire’s clutches. Leaders keenly aware of how US imperialism works and determined to keep it out of their own country are in power in Venezuela, Uruguay, Ecuador, Bolivia, Argentina, Brazil, Cuba, Guatemala, Nicaragua, Panama, and perhaps the latest addition, Paraguay.

And now Africa has turned down Washington’s offer to be part of the imperial family. African governments have refused to host Africom, the US Africa Command. The Washington Post reported that “worry swept the continent that the United States planned major new military installations in Africa”, and despite the promise of new development and security partnerships, many Africans concluded that Africom was primarily an extension of US counterterrorism policy, intended to keep an eye on Africa’s large Muslim population. The United States “equates terrorism with Islam,” said a senior Kenyan diplomat, and few African governments wanted to be seen as inviting US surveillance on their own people. [note from your editor: It would be more instructive to equate anti-American terrorism with American foreign policy, including building military bases in other people’s countries.]

When Bush visited Africa in February, he was told by the Ghanian president: “You’re not going to build any bases in Ghana.” US-funded aid groups protested plans to expand the American military’s role in economic development in Africa, sharply objecting to working alongside US troops. Said an Africom officer: “[Africom] was seen as a massive infusion of military might onto a continent that was quite proud of having removed foreign powers from its soil.”[1]

There’s also the oil factor. The US imports more oil from African nations than from Saudi Arabia, and the continent has huge unexplored areas. This undoubtedly is a major motivation behind Washington’s desire for an expanded military presence in the region. The United States is not about to take Africa’s rejection of Africom as the last word; indeed, some of the tough rhetoric by African officials may be for public consumption, for the US already has somewhat of a military presence on the continent. It will be interesting to observe the ongoing tug of war between Washington and African nationalists/anti-imperialists over expansion of the American presence.

Reporter: The American people are being asked to die and pay for this, and you’re saying that they have no say in this war?
Perino: I didn’t say that … this President was elected —
Reporter: Well, what it amounts to is you saying we have no input at all.
Perino: You had input. The American people have input every four years, and that’s the way our system is set up.[2]

In 1941, Edward Dowling, editor and priest, commented: “The two greatest obstacles to democracy in the United States are, first, the widespread delusion among the poor that we have a democracy, and second, the chronic terror among the rich, lest we get it.”

Can we look forward to Perino’s memoir after she leaves the White House in which, like her predecessor Scott McClellan recently, she confesses that she was part of a “permanent campaign” mode to deceive the American public? I’m prepared to welcome her into the fold as I have McClellan. I have a soft spot in my heart for political late bloomers. I used to work for the State Department when I was a good, loyal anti-communist.

Washington’s grand and noble new ally in the Free World

Scott McClellan has been criticized for not expressing his reservations about Bush administration policies while still at the White House. This would have indeed taken a measure of courage few people have, and likely meant his job and career committing suicide. I’m reminded of Carla Del Ponte, the Swiss diplomat who in 1999 became Chief Prosecutor for the International Criminal Tribunal for the former Yugoslavia, located in The Hague, Netherlands. In accordance with her official duties, she looked into possible war crimes of all the participants in the conflicts of the 1990s surrounding the breakup of Yugoslavia and the NATO (read the United States) 78-day bombing of Serbia and its province of Kosovo, where ethnic Albanians were trying to secede. In late December 1999, in an interview with The Observer of London, Del Ponte was asked if she was prepared to press criminal charges against NATO personnel (and not just against the former Yugoslav republics). She replied: “If I am not willing to do that, I am not in the right place. I must give up my mission.”

The Tribunal then announced that it had completed a study of possible NATO crimes, declaring: “It is very important for this tribunal to assert its authority over any and all authorities to the armed conflict within the former Yugoslavia.”

Was this a sign from heaven that the new millennium (2000 was but a week away) was going to be one of more equal international justice? Could this really be?

No, it couldn’t. From official quarters, military and civilian, of the United States and Canada, came disbelief, shock, anger, denials … “appalling” … “unjustified”. Del Ponte got the message. Her office quickly issued a statement: “NATO is not under investigation by the Office of the Prosecutor of the International Criminal Tribunal for the former Yugoslavia. There is no formal inquiry into the actions of NATO during the conflict in Kosovo.”[3]

Del Ponte remained in her position until the end of 2007, leaving to become the Swiss ambassador to Argentina; at the same time writing a book about her time with the Tribunal — “The Hunt: Me and War Criminals”, published two months ago but available at the moment only in Italian. It hasn’t been much reported yet what del Ponte has said about NATO, but the book has already created a scandal in Europe, for in it she reveals how the Kosovo Liberation Army (KLA) abducted hundreds of Serbs in 1999, and took them to Kosovo’s fellow Muslims in Albania where they were killed, their kidneys and other body parts then removed and sold for transplant in other countries.

Read the rest of it here. / Information Clearing House

This entry was posted in RagBlog and tagged Imperialism, U.S. Government. Bookmark the permalink.