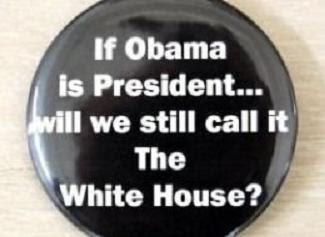 AUSTIN – The vendor who sold a racist pin at the Texas Republican Party convention last weekend in Houston apologized today and said he had no intention of creating the firestorm that has ensued.

“It’s just been crazy,” said Jonathan Alcox, who runs republicanmarket.com and had buttons and other items for sale at the GOP gathering. “The point is we made a mistake. I realize that now. And I apologize.”

The Republican Party of Texas announced today that it will donate to charity the $1,500 it received for leasing the booth to Mr. Alcox. The offending pin stated: “If Obama is president…Will we still call it the White House?”

The Dallas Morning News wrote about the pin being sold Saturday on its Trail Blazers blog and posted a picture of the pin. The story drew attention from several national news sites and blogs Tuesday and caused a firestorm of reaction, particularly at Texas GOP headquarters.

In a telephone interview from Florida, Mr. Alcox acknowledged the controversy but said it was unintentional.

“Obviously, it’s been offensive to people. It was not meant to be that way. We’re into humor – not racism,” Mr. Alcox said.

He said that he is neither Republican nor Democrat and that “there’s no agenda here.” He also runs a site offering Democratic merchandise, democratmall.com, and sells at Democratic gatherings.

He said after the blog post, his Web site was hacked, he was threatened, and the Texas Republican Party – his biggest customer — said it would never use his services again. He received so many abusive calls that he had to disconnect his phone. It’s the strongest reaction he’s gotten in 17 years in the business, he said.

Mr. Alcox said he made 12 of the pins after seeing a comic strip where Barack Obama was standing in front of a sign saying “The White House,” with the building behind him. Mr. Obama is depicted thinking, “That’s the first thing we’ll change.”

“We just changed it around a little bit and everyone went crazy. I was shocked,” Mr. Alcox said.

He said after having a conversation with a black man who called him about the blog post, he came to understand more about the nerve he had hit.

He said the Houston convention was the first time he had offered the pins, and he intended to see how they sold before putting them up on his Web site. He sold four pins – two of them to a reporter from The News.

He said that the party, while approving the lease to the vendor, was unaware of offensive merchandise being sold there.

The GOP plans to donate the money to the American Red Cross Disaster Relief Fund to help flood victims in the Midwest.

Mr. Klingler said he and party leaders believe the pin is distasteful and they hated that it was being sold at their event, which he said was upbeat and dedicated to unity.

First of all, that’s a lie there in the body of the story–the party certainly does vet vendor merchandise. How would I know? We’ve tried to be a vendor at the GOP convention–just for the hell of it–three times, and three times we’ve failed in the hunt. They told us they would have to see samples of all merchandise sold and then they would check it against a manifest when we moved into the hall. Obviously, with merchandise that says “End the war in Iraq” and “Army Wrong”–we’re not going to get in any time soon.

And oh, yes, I am writing the reporter to tell her the “real story.”

Thanks to Leslie Cunningham / The Rag Blog