Attacking in Pakistan While No One’s Looking 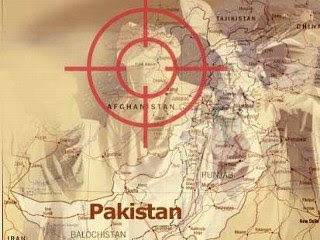 The raid may be the first time the US has sent troops into Pakistan. Prior attacks attributed to US forces were conducted with drones.

NATO and US ground troops attacked three houses near a Taliban and Al Qaeda stronghold in South Waziristan, a tribal area in Pakistan, on Wednesday, Pakistani officials said. At least 15 people – mostly civilians – are said to have been killed in the attack. Unlike previous NATO airstrikes in the region, this involved the deployment of ground troops. The attack comes in the wake of the Pakistan military’s announcement of a cease-fire with militants in the northern and tribal areas to observe the Muslim holy month of Ramadan.

According to The New York Times, the attack has been confirmed by the governor of the North West Frontier Province, a Taliban commander, and eyewitnesses. US and NATO officials in Afghanistan have not yet commented on the reported strike.

The attacks were aimed at three houses in the village of Jala Khel in the Angoor Adda area of South Waziristan, less than a mile from the border with Afghanistan, the Taliban commander and local residents said.

The helicopter attacks occurred at about 3 a.m. and killed 20 people, according to the provincial governor, Owais Ahmed Ghani said….

The BBC reports that ground troops were deployed as part of the attack. The report emphasizes that while airstrikes by coalition forces in Afghanistan against Pakistani militant targets have previously occurred, “a raid by ground troops would be rare.”

They say the soldiers killed more than a dozen people with gunfire and bombs, including women and children.

Witnesses told the BBC Urdu service that troops entered the house of a local tribesman, opened fire and then lobbed a bomb in the house. They said at least nine bodies had been recovered from the debris. The witnesses said the family was not known for links with militants.

According to a private Pakistani cable channel, local tribesmen, who were awake at the time of the attack to prepare for the day’s fast, responded by chanting anti-American slogans, reports United Press International.

Pakistani authorities believe the attack was aimed at a particular militant target, reports Voice of America.

He says he does not have details. Mukthar says three houses were targeted by NATO forces and theorizes the strike had a specific target.

NATO and US-led airstrikes against militant targets in Pakistan are controversial as they are perceived to violate national sovereignty, reports the Associated Press.

The United States and Pakistan, allies in the war on terror, have had tensions over cross-border attacks, including a series of suspected American missile strikes which have killed two senior al-Qaida operatives in Pakistani territory this year….

Pakistani officials protest that cross-border strikes are a violation of their sovereignty. They plead with U.S. and NATO commanders to share intelligence and allow Pakistani troops to carry out all raids on their territory.

In a separate incident on Wednesday, bullets were fired at the motorcade of Pakistani Prime Minister Yousaf Raza Gilani on the Islamabad Highway, reports Pakistani daily The News. The prime minister and his entourage were not harmed in the attack. The News also reports that militants from the Swat Valley, the site of recent military operations, have claimed responsibility for the attack.

US forces may have sent in ground troops for the first time Wednesday. Were they targetting a top Taliban or Al Qaeda figure?

New Delhi – A high-ranking Pakistani official has alleged that American ground forces crossed over from Afghanistan to carry out an attack on Pakistan soil.

While the United States has frequently been connected with missile attacks in Pakistan – usually carried out by pilotless drone aircraft – this claim, if true, would mark “a threshold being crossed,” says Ikram Sehgal, editor of Defence Journal in Karachi, Pakistan.

US forces have so far not been definitively linked to any ground operations in Pakistan, and the Pakistan government has repeatedly said it will not allow such an operation – which it calls a violation of national sovereignty – to take place.

“At least 20 innocent civilians of Pakistan including women and children were martyred,” he said.

The attack took place near Angoor Ada, a town in the South Waziristan tribal agency, according to Pakistan Army spokesman Maj. Murad Khan.

But claims of a NATO raid could not be verified. Indeed there was some confusion within Pakistan itself as to the nature of the attack. The Pakistani defense minister, Ahmad Mukhtar, referred to the attack as an airstrike. He also speculated that the raid targeted a specific Taliban or Al Qaeda figure.

A spokesman for US forces in Afghanistan refused comment. Defense officials at the Pentagon and at US Central Command, Tampa, Fla., would not confirm the incident and also had no further comment Wednesday morning.

The US says Pakistan’s tribal regions along the Afghan border have become a haven for Al Qaeda and the Taliban. It has pressured Pakistan to fight militancy in its country, while also weighing how aggressively it can carry out strikes of its own.

Even on a day when Prime Minister Yousuf Raza Gilani’s motorcade was fired upon, the allegations of a US attack in South Waziristan was leading Pakistani news. “People are not going to take it lightly,” says Mr. Sehgal.

Pakistanis have long resented what they see as US interference in their country, most notably in the support the US gave to a succession of military dictators, most recently former President Pervez Musharraf. Many will take this as confirmation of US meddling. The government must strongly condemn the attack if it is to retain some of the progress it has made in recent months on the security issue, says Mahmood Shah, a former secretary of the Federally Administered Tribal Areas.

Since talks with the Taliban broke down and Pakistan resumed military operations in FATA, several tribal leaders have joined the government’s side, forming militias to fight the Taliban.

In the hours after the allegations of an attack, “people have already started talking against the government,” Mr. Shah says, suggesting that people see the government as complicit or too weak to stand up to the Americans.

“If America starts pulling their [the government’s] leg in this fashion, then it will go the same way as General Pervez Musharraf,” who resigned as president last month, he adds.

The top presidential contender in Saturday’s election to replace Mr. Musharraf, Asif Zardari, is “seen as supported by the US,” says Sehgal.

Mr. Zardari recently called for a cease-fire in the tribal regions in observance of the Muslim holy month of Ramadan – in part to distance himself from this perception and to win votes for the election. His election seems assured, since the president is elected by provincial parliaments and the national assembly. His coalition has a majority. But the allegations of the attack could undermine what public support he has. “The timing is a bit of a surprise,” says Sehgal.

This entry was posted in RagBlog and tagged Afghanistan, NATO, Pakistan, War. Bookmark the permalink.

1 Response to Attacking in Pakistan While No One’s Looking