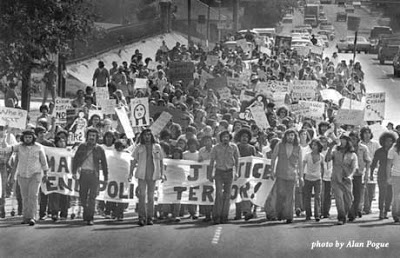 In the winter of 1969-70 I was driving a dump truck on the Highland Mall construction job, but heading back to the University in the spring. I approached my friend Paul Spencer concerning a possible near-campus housing situation among the Austin radical-hippie community. And so it was that I moved into what was then referred to as the Yellow Bordello apartment house at 2202 Nueces with my brand-new acquaintance Bob Bower and his girlfriend.

Bob was recently discharged from the Army, had ragged hair, and always wore his fatigue jacket. A Viet Nam veteran and Armored Personnel Carrier driver, he I think had been in combat (I never asked him) and had somehow become a peacenik while still in the Army. He had been stationed at Fort Hood after returning to the US, and I once saw a photo of his APC there with the name “Bolshevik” stenciled on it, in compliance with the requirement of a “B” name for his company but with an obvious defiant intent.

Bob smoked large quantities of alleged marijuana, and Army buddies dropped in all the time who apparently were addicted to heroin. He was advertised on posters around the campus as “Bob Bower, Antiwar GI” such that he came to introduce himself, with an ironic grin: “Hi, I’m Bob Bower, Antiwar GI.” Years later he described himself as having been “manipulated by the Trots” (Trotskyites) during that period, which if I recall comprised SMACK, SWAP and YASSA: the Student Mobilization Committee, the Socialist Workers Party and the Young Socialists’ Alliance.

My family’s dentist then was Harry someone, down on Rio Grande I think it was, near Fifteenth. On about the second day I knew Bob we found out we had consecutive appointments with him. I showed up in slacks and button-down shirt and sat in the waiting room. Finally the inner door opened and out lurched scrawny, long-haired, frizzy-mustached, fatigue-jacketed Bob, with buttons reading “US Out Now!” or some such, stoned out of his mind, his pupils huge and with the left half of his face drooping, paralyzed. What a sight! Bob careened through the door, and when he saw me looking up uncertainly from Newsweek he made a grotesque half-grin with the right side of his face and slobbered “Uhhhhh! Wowwww! Heyyyyyy! Faaar out! Henryyy!” Meanwhile Harry the Dentist was glaring out from behind him. I sensed an awkward situation.

As Bob reeled out the front door and I entered for my appointment, an agitated Harry demanded, “You know that guy??” Seeing Harry’s state of mind, and glancing nervously at the drill, I mumbled something noncommittal.

It turned out Harry was something of a right-wing nut, and further that Bob had apparently demanded that Harry withdraw the troops from Indochina immediately, and their conversation had become more and more acrimonious. I pictured Bob trying to carry on this argument in a principled manner while handicapped by tetra-hydro-cannabinol, Novocaine and Harry’s blunt fingers in his mouth.

Harry went on about Bob for a little while, jerking my lips this way and that, but finally calmed down, probably as he became stoned from Bob’s breath. Meanwhile I tried to nod and grunt in such a way as to indicate that I hardly knew ol’ Bob and that I completely disapproved of him. After that I always made damned sure that Bob wasn’t going to the dentist before me.

I think Bob is living today in Central America behind a scraggly beard.