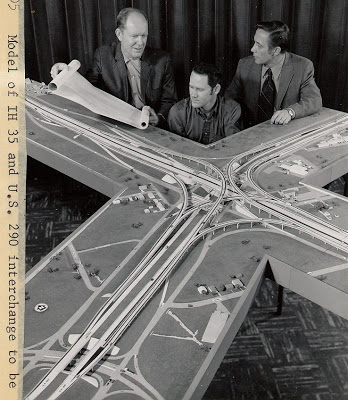 A little historical foreplay: 1971 Plans for the US 290/2222 interchange.
Proposed toll road: ‘The public hearing was set up and designed as an exercise in intimidation’
By Roger Baker / The Rag Blog / August 13, 2008

The conduct of federal law as practiced by the Texas road lobby just hit a new low yesterday at the US 290 E hearing on this proposed new toll road held last night, 8/12/’08.

This proposed but unfunded road would serve many minority and low income citizens commuting to the East of Austin.

Of course, the conduct of the meeting as well as these studies have been privatized so that that there is a built in conflict of interest. It goes without saying that no private environmental studies contractor chosen by either the CTRMA or TxDOT would be likely to get another contract if that contractor had the poor judgment to find that the road had any negative impact that would interfere with the goals those trying to promote the road seek.

The way that the meeting itself was conducted underlines these conclusions of inherent bias and conflict of interest. First of all the public hearing was publicized to begin at 7 pm. But the meeting was set up in such a way that those promoting the road took until 7:50 pm to explain why the road would have no environmental impact., etc. The cost of the road and its shaky financing situation were not explained.

The citizens signing up to speak were told that they were not permitted to face the other members of the audience, but that they had to face a large screen with giant numbers on which were projected numbers that that counted down the seconds in the brief time during which they were permitted to speak. These citizens were not allowed to ask questions of either TxDOT, the assembled CTRMA officials, or the private contractors conducting the hearing during the formally recorded portion of the hearing.

This procedure by its nature assured that while all the hour of comments by officials to the pubic were carefully recorded, communications in the other direcion were minimized and answers to questions by officials not recorded. Although comments during the brief three minute time permitted each citizen were indeed recorded, none of the responses to questions by the officials back to citizens during the brief ten minute break from 7:50 pm to 8 pm before the start of the public comments would or even could be recorded.

The ultimate indication that the public hearing was set up and designed as an exercise in intimidation rather than the open communication and information exchange process mandated under federal law was the fact that the organizers went to the trouble and expense of having FIVE giant screens on the walls in the auditorium on which were projected in big red numbers the seconds the numbers remaining in the brief three minutes that each citizen was permitted to speak. No citizen signing up was permitted to donate time to any other citizen.

In this way, the point that made in various ways that while federal laws mandate that a public hearing of some kind must be held, the way that the hearing was structured showed that it was intended to minimize the opportunity for meaningful two-way dialog with the officials and private contractors in charge of organizing this toll road hearing.

The lesson here is probably to channel citizen communications toward writing, because here federal law requires that a paper trail exists of the two-way dialog that this hearing was carefully structured to minimize.