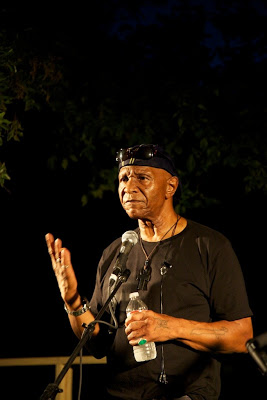 AUSTIN — A community-wide benefit for former Austinite and long-time political prisoner Marilyn Buck, on Friday, June 25, was a success on all levels. The event was co-hosted by The Rag Blog/New Journalism Project and NOKOA/The Observer, along with six other community groups and businesses, and supported by a lengthy roster of contributors.

A spokesperson for Youth Emergency Service, Inc. (YES, Inc.)/The Phogg Phoundation for the Pursuit of Happiness, the tax-exempt fiscal sponsor for the event, expressed confidence Monday that, when all receipts are counted, the event will meet or exceed its fundraising goal.

The evening was also a great chance for people to interact in a relaxed, easy-going atmosphere. Building community is a common goal for all eight hosting groups.

Host committee member Tania Rivera of Ex-Pinta Support Alliance (ESA) agreed. “It was a beautiful sight to see both the younger and older generation of our community join in solidarity to support Marilyn Buck’s release from prison. As an ex-pinta [“pinta” is Spanish for “female prisoner”], I was reminded of the importance of my commitment to struggle against the oppression of those left inside the cages, and for those coming home in exile.”

Marilyn Buck, imprisoned for 25 years for politically-motivated crimes committed in the 1970s and 1980s, is the daughter of the late former Episcopal priest Louis Buck, prominent in civil rights activity here in the early 1960s. Some attending the benefit were influenced by the elder Buck while they were students at UT Austin; some had participated with him in the struggle to end “Jim Crow” discrimination.

Other attendees had never met either Buck, but know of Marilyn through her acclaimed poetry, her contributions to political journals, or the sometimes exaggerated story of her days as an urban guerrilla that has evolved while she’s been behind bars.

Friday’s benefit, at a private East Austin riverfront estate, featured music by country/folk singer/songwriter Karen Abrahams and friends, activist songwriter Joe P. Carr, and the conscious hip-hop stylings of Riders Against the Storm. Poets Jorge Antonio Renaud and Henry Gonzalez read from their work, and some of Marilyn’s poems were read to the receptive crowd. 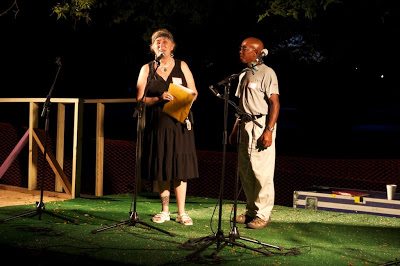 Event organizer Mariann Wizard with Akwasi Evans, editor of the progressive Austin weekly, NOKOA/The Observer. Photo by Alan Pogue / The Rag Blog.
Maria Elena Martinez, a shaman, medicine woman, and leader in Austin’s La Alma Mujer Council, led a healing ceremony for Marilyn, who now has a serious cancer. Under a brilliant full moon, participants held hands in a great circle, connecting to the four directions, the sky, the earth, and their own hearts, as they sent positive energy to Buck, now being treated in a prison hospital in Ft. Worth.

In addition to raising funds to help Marilyn when she is released on parole in August, and hopefully aid her recovery, organizers also honored her commitment to her ideals even while imprisoned. Without revisiting all of her decisions in an era of heavy government repression against radical groups, they cited factors that made her actions something other than criminal. The slogan for the event, “Free Marilyn Now,” urges speedy consideration of a request by Buck’s attorney for accelerated compassionate release, in light of her life-threatening illness.

Al-Walee, a former member of the Black Panther Party, likens Marilyn’s actions in opposition to racial oppression to those of pre-U.S. Civil War firebrand John Brown, except that in Buck’s case, she was not in the forefront of an imminent outbreak of hostilities. “When a revolutionary succeeds, he or she is revered as a hero, but success depends on many factors. Marilyn’s actions took place when repression was in the ascendancy, so she is treated as a common criminal.”

Two policemen and a Brinks security guard died in attempted robberies in which Buck and other members of what became known as the “Resistance Conspiracy Case” took part, and public property was damaged in bombings protesting U.S. foreign interventions.

Fugitive members of the radical underground, Marilyn and her co-defendants in this complicated, lengthy, multi-layered case represented the last vestige, in 1985, of what had, 15 years earlier, been a broad-based cultural and political “revolution.” While some goals of that movement had been then and still are being realized, its hopes for fundamental, systemic changes in our economic and political system remain far from realized.

The benefit also launched discussions in some quarters about the existence of political prisoners in the U.S. today, and what that means or should mean to the rest of us. Robert King, a local author and former political prisoner as one of the “Angola 3,” featured speaker at the benefit, also tackled the issue in programs on KOOP Radio earlier in the week and in his remarks Friday.

Born poor and black in Louisiana in the 1940s, his eventual encounter with the criminal injustice system was almost inevitable. Convicted of a crime he didn’t commit, his increasing political awareness and membership in the Black Panther Party helped him see that he had “been in a minimum security prison” all along.

King was held on what would later be acknowledged as false charges for 29 years in solitary confinement in Angola State Penitentiary. “We are all political prisoners,” he says, “only some are held in harsher conditions than others. Marilyn Buck’s confinement has been extremely harsh, and she deserves to come home.” A BBC documentary about the Angola 3, In the Land of the Free, narrated by Samuel L. Jackson, has recently been released to critical acclaim.

Some benefit guests traveled from San Antonio, San Marcos, and the Dallas-Ft. Worth area to attend. Other hosts were Ecology Action, One Love Kitchen, and Resistencia Bookstore/Red Salmon Arts.

To make a contribution to Marilyn Buck’s support, please send your check or money order to YES, Inc; PO Box 13549, Austin, TX 78711, with a note that it is for this purpose. Contributions are tax-deductible to the extent allowed by applicable tax law. 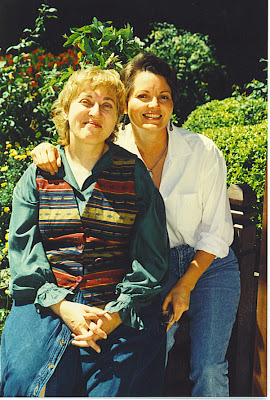 The Rag Blog’s Mariann Wizard (left) with Marilyn Buck at Dublin FCI in 1996.

[The following update on Marilyn Buck’s condition comes to us from Friends of Marilyn Buck.]

Marilyn has received her last chemo treatment at the hospital and is now back at the prison, receiving palliative care. She has undergone as much chemo as her body can tolerate. She feels that her medical care has been similar to what she would be getting in the free world, and that her doctors have been both competent and respectful of her. She is also receiving support from her sister-prisoners who are able to visit with her.

She’s been having very good visits with her family, and continues to feel the love and support of so many people who are meditating with her, sending her cards and generally keeping her in their thoughts.

Every effort is being made by her attorney to secure an early release. Marilyn asks that people not initiate their own letter-writing or phone campaigns for her release, as these are likely to be counterproductive. Should the situation change and such a campaign be deemed helpful, we’ll let everyone know right away.

In spite of the serious situation she faces, Marilyn’s spirits remain incredibly strong and her energy is focused on coming home to be with the people who love her. 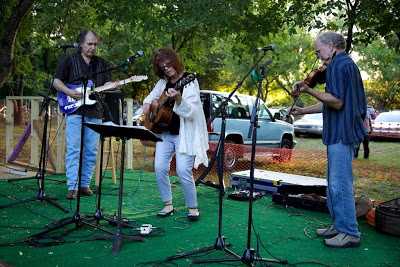 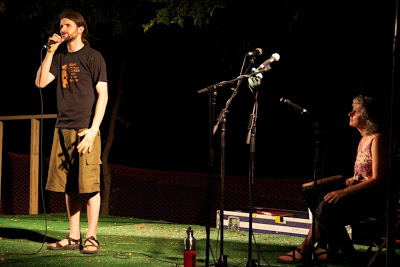 Activist/songwriter Joe P. Carr at the benefit for Marilyn Buck. 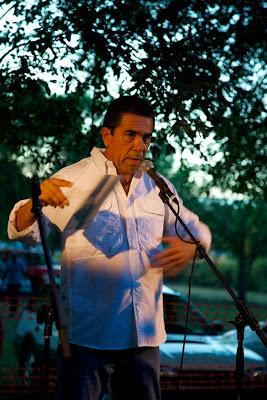 Poet Jorge Antonio Renaud spoke and read from his work Photos by Alan Pogue / The Rag Blog.
The Rag Blog