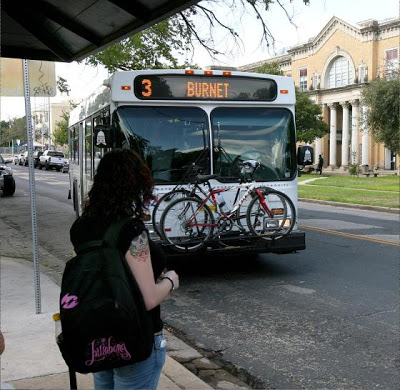 Waiting for a bus on the Rio Grande campus of Austin Community College. Photo by Alberto Martinez / Austin American-Statesman.

Transit officials in Austin refuse to even acknowledge the relationship between fare hikes and ridership loss. Their estimates for the first increase were off by a factor of ten.

The average Austin household contributes $450 per year to Capital Metro. Most people don’t ride the bus. So what is it that non-riders are paying for?

The few altruistic Socialists believe that low income residents deserve mobility, but the rest of us are paying for two things: less traffic congestion and the cleaner air that should result from less cars on the road. A great value in an ideal situation. Unfortunately, our transit authority fails to deliver. When they raised fares at the beginning of 2009, it resulted in over 1,000,000 fewer trips in the first six months.

By and large, non-choice riders use monthly passes and did not reduce their trips. Choice riders, those who have a car option, make up the vast majority of lost trips. So by raising fares, Metro added up to a million more car trips to our roads. Not exactly what we paid for. What we did pay for is management waste, and accelerated development. You can find mountains of evidence of this in the local daily.

Now Metro officials want to raise the fares again. The average increase would amount to over 100% in a one year period. Fear not, there is no threat to raise the $450 that non-riders pay, but imagine if there were. $900 a year to increase pollution and traffic congestion? This might finally get the attention of the seemingly oblivious CMTA Board of Directors. Even CAMPO chair, Kirk Watson might be moved by a 100% increase in his personal outlay.

Transit officials in Austin refuse to even acknowledge the relationship between fare hikes and ridership loss. Their estimates for the first increase were off by a factor of ten. Even if they proffer an estimate for the second hike, it will take a ton of sugar to swallow. The industry “fare-elasticity” model expects a 3-4% ridership drop for every 10% increase.

As environmentalists, we cannot stand for another devastating fare hike. Austin is approaching official EPA non-attainment status. Mass transit is a proven, effective means of reducing pollution. As the system is already in place, it is also far and away the most immediate and efficient means.

Not only should we stop the fare hike, we should demand that the transit system we bought be used effectively and begin exploring ways to maximize ridership like the fare-free proposal put forth last year by the Bus Riders Union-ATX. Then we would all pay the same price. And get our $450 worth. 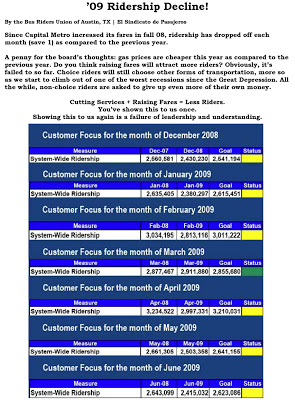