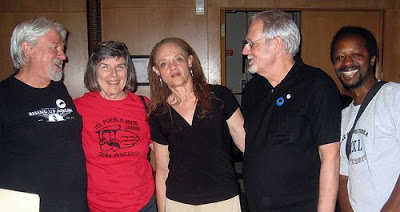 ‘1968: A Global Perspective’ keynote speaker Kathleen Cleaver, center, at the UT-Austin campus. Immediately flanking her are conference panelists Alice Embree and Thorne Dreyer of The Rag Blog. At far left and far right are Jim Retherford and Carl Webb of MDS/Austin. Photo by Carlos Lowry / The Rag Blog.
Cleaver’s readings from her upcoming memoir were tender and honest.
By Alice Embree / The Rag Blog / October 16, 2008

An interdisciplinary conference at the University of Texas at Austin focused on 1968: A Global Perspective. In a previous Rag Blog article, Thorne Dreyer highlighted the keynote speakers, Daniel Ellsberg and Kathleen Cleaver and a panel discussion on “SDS and Student Activism Today.” The same post gave information on an exhibit at the Center for American History that can be viewed through January 2009. Susan Van Haitsma wrote about Ellsberg’s fine presentation in another Rag Blog article.

Kathleen Cleaver, law professor (Yale and Emory) and former leader of the Black Panther Party read from her memoir, “Memories of Love and War” on Friday, October 10 on the campus of the University of Texas at Austin. Cleaver was a keynote speaker at “1968: A Global View.” Cleaver’s work – still in progress – was both tender and honest.

She and Eldridge lived in Oakland at one of the epicenters of revolutionary activity. She described the raids on her home, the murder of Bobby Hutton, the organizing to free Bobby Seale. It gave context to the news that she and other Panthers heard in their attorney’s office on April 4th – that Martin Luther King, Jr. had been assassinated. She is unrelentingly honesty. The Panthers were living day-to-day with escalating repression when the advocate for non-violent resistance was gunned down.

Cleaver’s respect for Eldridge was obvious. She came out of the Student Non-Violent Coordinating Committee (SNCC) and he came out of prison, a self-educated, well-read political analyst. Their marriage co-existed in the cauldron of revolutionary upheaval. They lived in exile in Algeria for several years.

In her responses to questions, she never seemed to “triangulate” on truth. A student asked her opinion of what the New York Times calls a “post-racial” America. “First,” she said, “don’t rely on the New York Times to define you.” She talked about the Panthers’ study of Franz Fanon and his theories about colonial domination. When an audience member asked her about feminism, she responded that they were focused on trying to keep both their brothers from being murdered.

Cleaver will be coming to teach at the UT law school this spring. Hopefully, this will allow for more dialogue.

On Saturday, October 11th, Thorne Dreyer and I participated as the elder generation in a dialogue about student organizing. Rosario Martinez of (Movimiento Estudiantil Chicana/o de Aztlan (MEChA) and Kelly Booker of Campus Antiwar Movement to End the Occupations (CAMEO). Martinez talked about successful efforts to build a coalition around immigrant rights before the April 10 and May 1,2006 Austin marches. Booker spoke of the successes and challenges of antiwar organizing in a post-9/11, Patriot Act environment. There were huge antiwar mobilizations preceding the March 2003 invasion of Iraq. When they did nothing to prevent the invasion, morale shattered and many decided that marches had no effect.

If you want to support the current generation, there are two things that you can do:

1) Boycott Chipotle until they sign a contract with the Florida farm workers and agree to work with the Coalition of Immokalee Workers (CIW). This has been an effective strategy with McDonald’s and Burger King and Yum Brands. Visit www.ciw-online.org for more information.

2) Hear Camilo Mejia at 7 pm, on Thursday, October 16 at UT Garrison 01.102. CAMEO is the sponsor of this event. Mejia grew up in Nicaragua and Costa Rica before moving to the U.S. He joined the military at 19. After fighting in Iraq for five months, he became the first known Iraq veteran to refuse to fight. He was convicted of desertion and sentenced to a year in prison. He is the author of Road from ar Ramadi: An Iraq War Memoir.

Also of note, the Center for American History at UT has an exhibit in progress that features 1968 poster art and the SDS Comic Show. Panels from Students for a Democratic Society: A Graphic History are displayed. The book, published by Hill and Wang, is written by noted graphic artist Harvey Pekar, illustrated by Gary Dumm and edited by Paul Buhle, senior lecturer at Brown University and left historian. Austin panels included in the book are featured as well. The Center is open 10-5 Monday-Friday and Saturday 9-2 (when UT doesn’t play an at-home football game). Parking is easy. The exhibit is free. It will run through January 2009.

And Daniel Ellsberg and the Concept of Freedom of Conscience by Susan Van Haitsma / The Rag Blog / Oct. 9, 2008