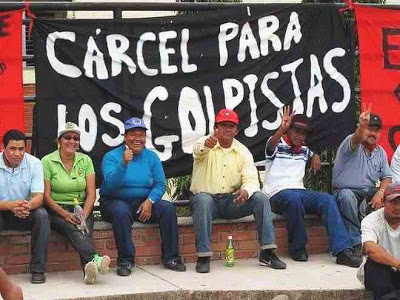 A message from Honduras: “Jail for the coup-plotters!”. Photo from Indymedia/Honduras.
Demonstration is part of week of international action against Honduran coup.

Demonstrators in Austin gathered on August 14 to denounce the coup in Honduras and urge the U.S. government to take decisive action to reinstate President Manuel Zelaya. The protest was part of a week of international action against the June 28 Honduran coup.

The protest, that drew more than two dozen people, was called by the fledgling Austin chapter of the Committee in Solidarity with the People of El Salvador (CISPES) and brought representatives from CISPES, the Texas Fair Trade Coalition, PODER, CodePink, Texas Labor Against the War. the Coalition of Immokalee Workers and others to the corner of 6th and Lamar under the blazing Texas sun. Pedestrians and cars stopped at the busy intersection were leafleted. 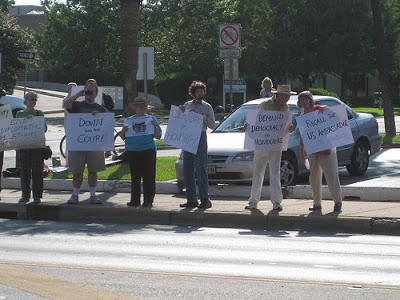 Demonstrators in Austin protest coup in Honduras on August 14.
Those who support democracy in Central America were encouraged to make their voices heard, asking the Obama administration to join other nations in taking serious steps to restore democracy. Those steps include:

CISPES urged Austin residents to call 202-224-3121 and urge their Congressional Representatives to support House Resolution 630 demanding, among other things, that President Zelaya be immediately reinstated.