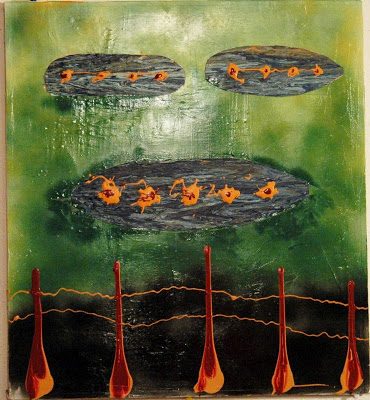 “U.F.O.’s” (2008) / by Marcus / Austin, Texas.
House paint over spray paint over gesso on plywood (20″ x 22″).
‘McCullough and Lancaster aren’t sure what they captured on video. The executive director of the Austin Planetarium doesn’t know either.’
By Alexis Patterson / November 21, 2008

The Austin Planetarium is now investigating some strange sights in the sky – caught on tape. An astronomy expert is calling them unidentified flying objects – UFOs.

Some men who live in a Central Austin apartment building say they’ve seen bizarre things in the sky for months, but lately it’s been more frequent. The men recorded their sightings on home video. Experts from the Austin Planetarium visited the apartment building area Friday night to see if they could also spot the objects.

Nothing appeared in the sky Friday that would convert any skeptics. But the home video show by Carl Lancaster and Doug McCullough may raise questions in some people’s minds.

McCullough and Lancaster aren’t sure what they captured on video. The executive director of the Austin Planetarium doesn’t know either.

“It doesn’t look like anything I can recognize,” said Torvald Hessel.

Hessel, an astronomer, says the objects don’t move like an airplane.

“There’s a military base close by, so that would be possible, and they are not going to tell you if they’re flying something special,” said Hessel.

But Hessel doesn’t think the shapes are weather balloons, comets, or shooting stars.

“It’s an unidentified flying object,” said Hessel. “I’m not saying it’s little green men at all. It’s just something we see flying in the air, and we don’t know what it is.”

The Austin Planetarium plans to try to enhance the video to see if some answers can be identified. The video enhancement will take a few days at least. In the meantime, Lancaster and McCullough say they’ll keep watching the sky.

Lancaster and McCullough say they first saw the objects back in April, then didn’t see them again until September. They tell CBS 42 they’ve consistently seen the objects since then.

This entry was posted in RagBlog and tagged Austin, Texas, UFOs. Bookmark the permalink.