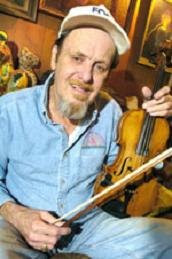 Benny Thurman, a founding member and bassist of the famed sixties rock group the Thirteenth Floor Elevators, died this past Sunday, June 22 in Austin. Thurman was in intensive care at Austin’s Seton Hospital for two and a half weeks before his passing from undisclosed illnesses. He was 65.

Thurman played bass for the Elevators from the band’s beginning in late 1965 until mid-1966.

Austin’s Thirteenth Floor Elevators, the first band to openly embrace the concept of “psychedelic rock” and whose live concerts became a thing of legend, never gained mass popularity or much commercial success but were headliners in the early days of San Francisco’s psychedelic rock scene. The band’s legacy continues, its songs covered by a new generation of bands, and the Elevators are often cited as a major influence by musicians like Bruce Springsteen and the Rolling Stones. 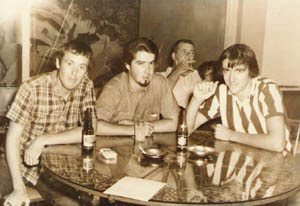 The following article by Margaret Moser appeared in the Austin Chronicle on August 20, 2004.

“I wasn’t too much on bass, I was a fiddle player, violin. I couldn’t play bass worth a darn, but I said I’d learn. It was hard, but I got a big ol’ jazz bass from John Ike [Walton]. I could keep up and was on a lot of the fast rock stuff, but then they got into those romantic love songs, with Roky singing.”

So reflects Benny Thurman on his two years as the original bassist for the 13th Floor Elevators. Retired from a state job and caring for his mother, Thurman jokes about spending his days watching Jerry Springer and living with “three cats, two dogs, and a redbird nest outside the window with little blue eggs in it.”

Thurman was classically trained as a violinist, playing in his high school orchestra before joining the Marines. He returned to Austin after the service and one fortuitous afternoon sauntered into Dirty’s Hamburgers on the Drag where he met John Ike Walton and Stacy Sutherland. The three teamed up, found a singer, and relocated to the coast, where they called themselves the Lingsmen and played “the Dunes, a concession stand on the beach, Wednesday nights and weekends” with great success.

After Tommy Hall drafted the band’s rhythm section for the Elevators, Thurman found his world and music had changed.

Compared to everyone else, we were smashing! We had the sound, the image – you can hear the gap between us and what else was going on in 1965. It’s the basic beat. When you first get hip, it’s what you feel. We were inspired by Dylan. And Janis. Janis really tore it up. Tommy was the main instigator. I remember sweating it out, rehearsing for gigs.

The music was so new, they called it the 13th floor – everyone else had only gone to 12. It was the movement of the spirit – Owsley, Leary, the Dead. People were tired of the Kingston Trio and ‘Where Have All the Flowers Gone?’ and the Elevators were on the pinnacle. We went out to San Francisco and L.A. twice in a Volkswagen and stayed with Clementine. She was so kind with us when we were there.

Believe me, nobody wants to stay on the 13th floor. It’s too weird. It was bedlam, that Armageddon-in-your-mind type music. And we were the first, the original. We were onto the pyramid, with its mystical Egyptian connection. Incense, hash, peyote were introduced into the culture. Amphetamines and barbiturates. I liked Desoxyn; I’m drug-free now. After the bust, I broke away. I was about to get married and they needed a better bass player.

Thurman went on to play with other Austin acts, notably Plum Nelly in the mid-Seventies, but with family responsibilities looming, he left music behind.

Nevertheless, his time as an Elevator is a source of great pride for him.

“I’d like to see Tommy again someday,” he commented wistfully. “We caught the wave and held onto our surfboard. It was all an experiment, but it was a great experience. A lot of people never get to experience anything at all. Not just performing, but the life around it, the sparkle of it, the groove. I got some of it.”

Special thanks to Fontaine Maverick / The Rag Blog