Austin : Some ‘Poopers’ at the ‘Tea Party’ 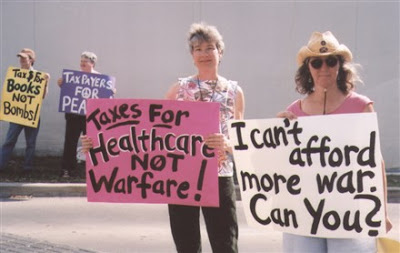 A different message at Austin Tea Party: The Rag Blog’s Susan Van Haitsma and Fran Hanlon (right), both with CodePink. Photo by Andy McKenna / The Rag Blog.
Speaking of taxes:
I can’t afford more war. Can you?

AUSTIN — Well, it certainly was an interesting day yesterday. The Sarah Palin/Rick Perry crowd hit the streets with messages that clearly represented public frustration with huge US debt and wasteful spending that has caused job losses, business closures, home foreclosures and lots of serious anxiety. But, people! I’m glad you’re using your First Amendment rights, but for heaven’s sake — where were you when the Bush Administration was throwing your resources into the black hole of unnecessary war and occupation? What gobbles up most of your tax dollars? Military spending — the biggest elephant in the room not discussed at your tea party!

So, you want to keep your money and guns and let us keep the change. Hanging so tightly onto your guns has consequences, folks. Guns will not feed you, and they won’t pay the rent. Tanks, mortar rounds, predator drones and cluster bombs will bleed you dry, increasing the motivation for retaliatory attacks and eroding overall security, not improving it. As Quaker founder, George Fox, reportedly replied to William Penn when Penn asked if he would have to give up his weapon, “Wear your sword as long as thou canst.”

You know, I’m also thinking that some of Rick Perry’s sentiments echo pretty closely those of the hardline Islamic fundamentalists he likely regards as enemies. Perry is quoted in today’s Austin American-Statesma saying, “I believe that our federal government has become oppressive in its size, its intrusion into the lives of our citizens and its interference with the affairs of our state.” (Is he talking wire-tapping?)

In another article in the same issue, an Afghan cleric named Mohammed Hussein Jafaari is quoted saying, “We Afghans don’t want a bunch of NATO commanders and foreign ministers telling us what to do.”

Why would Governor Perry suggest that Texas should function as its own independent nation and at the same time champion the corporate and military occupations of sovereign nations abroad? Good grief.

Some of us tea party-poopers had a demo at the downtown post office yesterday evening, where we annually make our case that the largest budget item of the federal tax pie is the real culprit in our tea-tering economy. And freeing those resources to fund what humans need to live is freedom that means something.

1 Response to Austin : Some ‘Poopers’ at the ‘Tea Party’