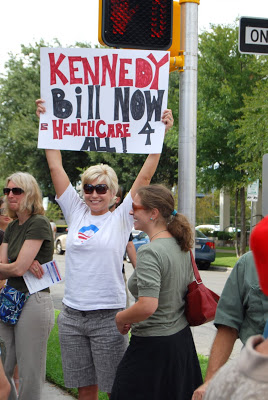 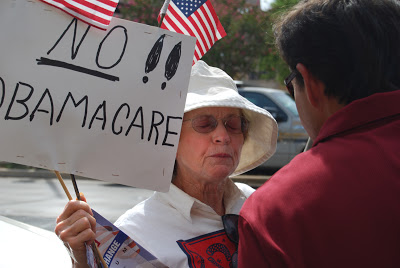 Rev. Jim Rigby, pastor of St. Andrews Presbyterian Church, pondered how it can be considered Christian ‘to express concern about millions of uninsured and underinsured Americans,’ but Communist ‘to try to do something about it.’

Forty-eight-year-old Linda Flores (not her real name) arrived at Saturday afternoon’s downtown Austin healthcare reform rally in her nurse’s scrubs, looking for answers. Though she has worked eight years at a major international pharmaceutical research and development company, she has no health insurance.

Flores has heard the negative talk about Obama’s health care initiative, and, on top of that, she has her own nagging concerns about Big Government. She said that she enthusiastically voted for Barack Obama in 2008, but in recent months has had trouble supporting the direction of the Democrat-led government.

Asked why, she replied: “Timothy Geithner.”

Flores said she was there so that she could ask keynote speaker U.S. Rep. Lloyd Doggett (D-TX) — or anyone with real answers — what the proposed new health plan would take out of her already meager paycheck. She is very emotional. Her distress is misunderstood by others standing in line as Teabagger anger.

I asked her why she is so emotional about healthcare reform. The reason, she said, was that the hugely profitable healthcare corporation for whom she works not only provides no health insurance but also pays wages that were insufficient to afford for an alternative.

Because she earns less than 20,000 a year and is the sole provider for two school-age children, Linda has not seen a physician, had an annual check-up, or received a mammogram for the past four years.

Unlike Flores, nearly all of the 2,000-2,500 people who gathered for MoveOn.org’s healthcare rally and forum already were in support of healthcare reform. Their only question was how to get Congress to break the money-driven grip of the insurance industry and enact real change with a workable public option. Except for about four dozen Tea Party and Secessionist protesters gathered in the grassy median on 12th Street between Lavaca and Colorado streets near the church — and a handful of Teabaggers who unsuccessfully tried to disrupt the meeting inside the church — all supported reform.

Long before the 3 p.m. start time, supporters filled the 1,200 seats of the First United Methodist Church and overflowed hastily arranged space at the nearby AFL-CIO union hall and a Texas Trial Lawyers Association auditorium. Hundreds remained outside with signs and banners to face off against the slogan-shouting Teabaggers. Department of Public Safety officers kept the groups at yelling distance on opposite sides of the street.

Inside the church, a dozen speakers — politicians, doctors, civic and religious leaders, policy wonks, and citizens — cited facts and recounted personal stories about the failure of the American health care system. Rev. Jim Rigby, pastor of St. Andrews Presbyterian Church, pondered how it can be considered Christian “to express concern about millions of uninsured and underinsured Americans,” but Communist “to try to do something about it.” 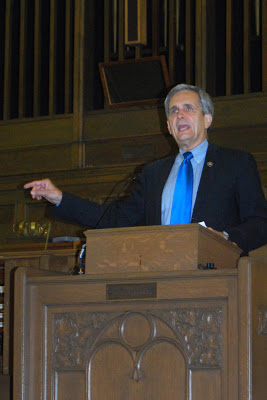 Rep. Lloyd Doggett told the enthusiastic crowd that he left his horns at home. Photo by James Retherford / The Rag Blog.
Quipping that he left his horns at home this time, Rep. Doggett, who earlier this month was ambushed in South Austin by a right-wing mob carrying signs portraying the 25th District congressmen as the devil, declared that the confrontation only increased his resolve to pass meaningful healthcare legislation with a viable public option. Referring to belligerent healthcare reform foes, he added:

“To those we have heard today, and on other occasions, who shout ‘Just say no,’ who say ‘No way,’ who say ‘Never,’ who offer no solutions, I say to you Teabaggers, All you have to offer is some mighty weak tea.”

While health insurance companies are spending more than a million dollars a day “to defeat the public option,” Doggett observed that the U.S. has the “least efficient healthcare system in the world. We have a healthcare system where more people employed there are concerned about denying claims than actually being doctor and nurses and other professionals concerned with providing care.”

“What specifically can you do,” he told the audience. “Insist on a strong public plan and don’t accept any substitutes.”

The crowd stood and rocked the pews.

Elsewhere in the church, some of the wingnuts were attempting to find spots where they could disrupt the forum. One woman was removed by Travis County constables after she held up a sign opposing socialized medicine.

On an elevator just outside the sanctuary, a 52-year-old Mexican-American woman found herself alone with a red-faced angry-looking heavy-set 50ish white man wearing a straw hat and sunglasses. He looked at the women scornfully and declared, “I’m a Texan. What are you?”

Taken aback by the man’s antagonism, the woman replied, “So am I.”

“And so am I,” the woman countered. “My ancestors fought for Texas independence. My great-great-great uncle fell with Fannin at Goliad.”

The woman was not aware that hours earlier 150-200 members of a far-right-wing secessionist fringe group calling itself the Texas Nationalist Movement had demonstrated at the Capitol, calling for a “bloody” new civil war.

Some of them stuck around to join the Teabaggers.

This uncomfortable encounter between a dark-skinned daughter of the Texas revolution and this pale-skinned nativist son of Texas provides an ironic glimpse into the multiple layers of contradiction surrounding the nativist fringe in general and the so-called Texas Nationalist Movement in particular.

First is the irony, obviously lost on the man in the elevator, that Texas won its independence from Mexico because Anglo settlers — from not only the U.S. but also other parts of the world — found common ground with Tejanos such as Seguín, the de León family, Benavides, the Carbajal brothers, and others. Some were Texas martyrs; all were Texas patriots — including several African-Texans.

But the biggest contradiction embedded in the Texas Nationalist Movement’s war cry of secession is this. Even if this racist fringe group somehow were to successfully break away from the federal government, they would find themselves in a new republic of Texas in which they are a shrinking racial minority. I don’t think this is what these people have in mind.

As the elevator door opened and the voice of state NAACP president Gary Bledsoe could be heard from the podium, the man in the straw hat spat on the floor and muttered, “Another goddamned nigger.” 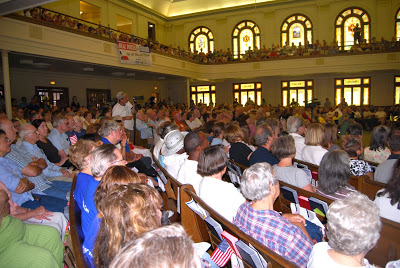 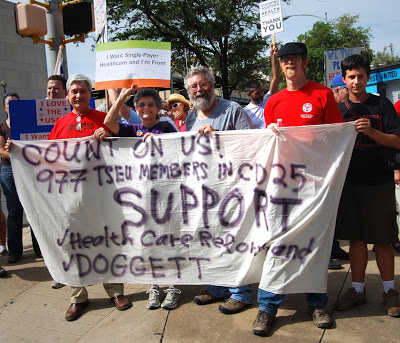 Supporters for health care reform gather at First United Methodist Church in Austin Saturday — inside and out. Photos by James Retherford / The Rag Blog. 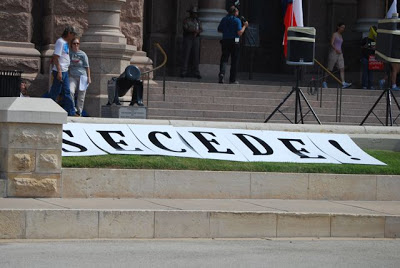 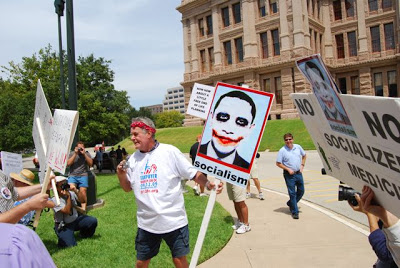 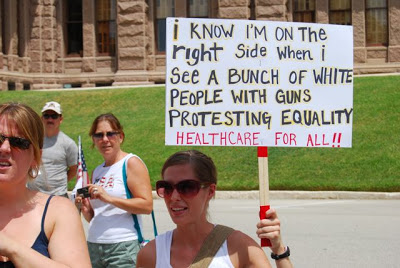