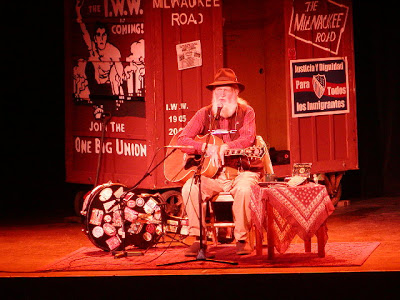 Austin Vets For Peace is raising money for our fellow Peace veteran and VFP member, the folk singer Utah Phillips. Utah has been grounded by congestive heart failure. There will be a benefit Sunday, May 18, at 5 pm, at Jovita’s in Austin.

He is very grateful that we are doing this; his family is in a pinch and needs the support. He is sending us some CDs to sell at the event

Utah was denied the opportunity for a heart transplant. It was determined that his body was too weak to survive the operation. He has congestive heart failure and will grow progressively weaker until he dies of it. In the meantime, he is fighting back. He stayed in the hospital for over a month, as they determined a good medical regimen for him. He now wears a shoulder bag filled with his medications and a computerized pump, from which runs a permanent IV directly into his heart. He has had to “give up the trade,” as he put it very sadly.

Utah told me about the first time he came to Austin, shivering in his boots because he had heard of the Texas habit of throwing beer, and beer bottles, at the performers. Imagine his pleasure when he showed up at the club, Emma and Joe’s, to find photos of Emma Goldman and Joe Hill on the wall.

He was especially pleased that Veterans for Peace is supporting this event. He is a Korean War veteran and a VFP member in good standing. He said, “If there is an organization in the US with the moral authority to turn things around, it would be Veterans For Peace.” Later in the conversation, he said that the most important movement on the planet is feminism and that only feminist men would be able to change the habit of old men ordering young men to take weapons and kill other people, and young men seeking thrills and gender identity through obedience.

The schedule for entertainers at the benefit is as follows:

U. Utah Phillips — Funniest Story Ever!!

Bruce “Utah” Phillips (born May 15, 1935 in Cleveland, Ohio) is a labor organizer, folk singer, storyteller, poet and self-described “Golden Voice of the Great Southwest”. He describes the struggles of labor unions and the power of direct action. He often promotes the Industrial Workers of the World in his music, actions, and words.

Phillips served the United States Army for three years beginning in 1956. Witnessing the devastation of post-war Korea greatly influenced his social and political thinking. Following service, he returned to Salt Lake City, Utah and joined Ammon Hennacy from the Catholic Worker Movement in establishing a mission house of hospitality named after the activist Joe Hill. [1] [2]Phillips worked at the Joe Hill House for the next eight years, then ran for the U.S. Senate as a candidate of Utah’s Peace and Freedom Party in 1968. He received 2,019 votes (0.5%) in an election won byRepublican Wallace F. Bennett.

Phillips met folk singer Rosalie Sorrels in the early 1950s, and has remained a close friend of hers ever since. It was Sorrels who started playing the songs that Phillipswrote, and through her his music began to spread. After leaving Utah in the late ’60s, he went to Saratoga Springs, New York, where he was befriended by the folk community at the Caffé Lena coffee house, where he became a staple performer throughout that decade.

An avid rail fan, Phillips has recorded several albums of music related to the railroads, especially the era of steam locomotives. His first recorded album, Good Though!, is an example, and contains such songs as ” Daddy, What’s a Train?” and “Queen of the Rails” as well as what may be his most famous composition, “Moose Turd Pie” [3]wherein he tells a tall tale of his work as a gandy dancer repairing track in the Southwestern United States desert.

In 1991 Phillips recorded an album of song, poetry and short stories entitled I’ve Got To Know in one take, inspired by his anger at the first Gulf War. The album includes “Enola Gay,” his first composition written about the United States’ atomic attack onHiroshima and Nagasaki.

Phillips was a mentor to Kate Wolf. He has recorded songs and stories with Rosalie Sorrels on a CD called The Long Memory (1996), originally a college project fromMontana. Ani DiFranco has recorded two CDs, The Past Didn’t Go Anywhere (1996) and Fellow Workers (1999), with him. He was nominated for a Grammy Award for his work with Ani DiFranco. His “Green Rolling Hills” was made into a country hit byEmmylou Harris, and ” The Goodnight-Loving Trail” has become a classic as well, being recorded by Ian Tyson, Tom Waits, and others.

Phillips has become an elder statesman for the folk music community, and a keeper of stories and songs that might otherwise have passed into obscurity. He is also a member of the great Traveling Nation, the community of hobos and railroad bums that populates the midwest United States along the rail lines, and is an important keeper of their history and culture.

When Kate Wolf grew ill and was forced to cancel concerts, she asked Phillips to fill in. Suffering from an ailment which makes it more difficult to play guitar, Phillips hesitated, citing his declining guitar ability. “Nobody ever came just to hear you play,” she said. Phillips tells this story as a way of explaining how his style over the years has become increasingly based on storytelling instead of just songs. He is a gifted storyteller and monologist, and his concerts generally have an even mix of spoken word and sung content. He attributes much of his success to his personality. “It is better to be likeable than talented,” he often says, self-deprecatingly.

Until it lost its funding, Phillips hosted his own weekly radio show, Loafer’s Glory: The Hobo Jungle of the Mind.