Austin Works to Maintain its Status as Live Music Mecca 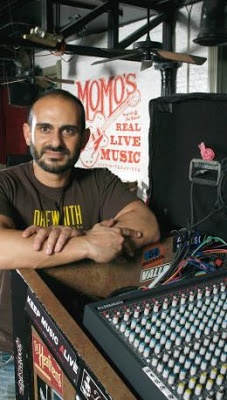 Paul Oveisi, who chairs the 15-member Live Music Task Force created by the Austin City Council, at Momo’s, his live music venue on Austin’s famed Sixth Street. Photo by Harry Cabluck / AP.
‘Today, Austin is defined as much by its high-tech industry as its live music scene, and some say the once laid-back college town is in danger of losing its stage presence.’
By Jay Root / November 23, 2008

AUSTIN — Thriving nightclubs, popular festivals and favorite sons like Willie Nelson and Stevie Ray Vaughan have given Austin a well-deserved, if boastful, moniker: “Live Music Capital of the World.”

But the world has gotten a lot bigger since the days of the Armadillo World Headquarters, when hippies and rednecks joined together in musical harmony and everybody got to park for free. Back then, to hear the old timers tell it, nobody worried much about health insurance or affordable housing, and noise complaints were considered welcome attention.

Today, Austin is defined as much by its high-tech industry as its live music scene, and some say the once laid-back college town is in danger of losing its stage presence. That’s why city leaders are welcoming a plan to promote Austin’s rhythmic heritage, ease the struggles of performing artists and make the town a true music incubator.

“We’re kind of at this pinnacle moment, where we can either continue the status quo and watch a dilution of the music scene, or we can value it and recognize that it’s part of the fabric of who we are as a city,” says Paul Oveisi, an Austin club owner who helped compile a recent series of recommendations about promoting the live music scene.

The Austin music task force Oveisi heads up is now pushing the creation of a city music department, the development of more music venues, an aggressive marketing campaign and incentives designed to lure music industry components such as publishing houses, managers, record labels and digital distributors.

Music enthusiasts also want to crack down on what they say are a handful of fly-by-night outdoor venues that blast high-decibel noise into the night and produce most of the music-related, sound ordinance violations.

City leaders, who received the report from the panel last week, say there’s good reason to protect Austin’s status as a live music hub. Live music and related industries have an estimated $1 billion economic impact on Austin, whose cultural sector generates some $2.3 billion in yearly economic activity. There are an estimated 8,000 working musicians in Austin.

The pulsating music scene has helped give the state capital its enduring reputation as a youthfully hip, fun town. It was here, at the old Armadillo World Headquarters in the early 1970s, that Willie Nelson’s brand of outlaw country was born. Years later, at the famed Antone’s nightclub, blues guitarist Stevie Ray Vaughan roared into the city’s musical conscience.

Since then, internationally acclaimed musical festivals like South By Southwest (SXSW) and Austin City Limits have lured thousands, and thriving venues from 6th Street to South Lamar — places like Antone’s, The Broken Spoke, Momo’s, the Continental Club, Stubbs, La Zona Rosa, The Hole in the Wall — continue to draw big acts and large crowds.

“Live music is a defining characteristic of Austin,” said Austin Mayor Will Wynn. “Many people consider it to be the heart and soul of what makes Austin such a desirable city in which to live, work and play.”

But members of the task force say the city’s rapid expansion, rising health care costs, expensive real estate — even the difficulty of finding a parking spot in the car-choked city center — have made Austin an increasingly tough place to make a living as a performer.

“It’s tough when your take home pay is a hundred bucks and 20 of it is going to pay for the valet guy who parked your car, or 15 of it is going to pay the parking ticket,” said Brandon Aghamalian, one of the 15 task force panelists. Their report recommends that the city give parking vouchers to “certified musicians” in entertainment districts and create loading and unloading areas specifically reserved for them.

It also urges the city to pool public and private funds to help provide affordable housing and bolster health care services for performers, including the possible creation of a musician-only health clinic similar to the one in New Orleans.

Promoting the entertainment business at a time of national economic decline might be a tough sell, but task force members and city leaders alike say Austin’s music scene is a vital job-creating engine that will pay long-term dividends. Plus, legendary guitarist Carlos Santana, who just opened a new restaurant and live music venue in Austin called Maria Maria, says the economic distress will soon seem like “a bad dream that you won’t even remember.”

Appearing at the grand opening of the restaurant earlier this month, Santana fondly recalled playing here with Vaughan and the Fabulous Thunderbirds and said he envisioned performing at his club next year. Santana said Austin’s musical heritage won’t fade because it flows naturally from the musical legends and fans who found their vibe amid the city’s limestone cliffs.

“The thing about music is that if you think about it you missed it. You just have to just, like, trust your heart to feel it. And my favorite story about Austin is that,” Santana said. “There is something really special about Austin.”