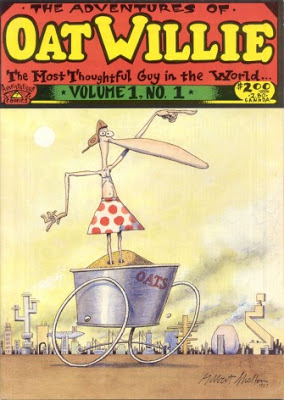 Oat Willie’s, Austin’s venerable sixties headshop, a living monument to counterculture history in one of the true birthplaces of the sixties counterculture, recently observed its fortieth birthday with a gala celebration at Austin’s Moose Lodge. Hosted by founder and proprietor Doug Brown, a wondrous gathering of vintage luminaries and geezerly ne’er-do-wells marked the occasion by downing a surfeit of Doug’s spirits and juicy barbeque while hobnobbing and telling lies.

The following comes to us from Leea Mechling of the South Austin Museum of Popular Culture where a show of original artwork produced for Oat Willie’s will open May 24, 2008.

It was the prototype of what was to become Oat Willie’s. It was purchased forty years ago by Doug Brown (and George Majewski) from Joe Brown for $75. At that time the inventory consisted mostly of a pile of Los Angeles Free Presses and a pile of free clothes.

Doug and George ran the place, but had to keep other jobs at first since the place didn’t make enough to support them while they built their stock into what became the first head shop in Austin history. Their first order of products was from Bells of Sarna in New York and consisted of Indian brass merchandise, incense, and candles. They put it in the window and the candles melted, covering the incense boxes with wax.

And so began a four decade run here in the Capital City that still continues to this day. The name of the establishment was changed early on to Oat Willie’s, who was a minor character in the pantheon of comic art personas created by local artist Gilbert Shelton before he moved out to San Francisco and hooked up with Jack Jackson and Rip Off Press to create the world of underground comix.

They sold Johnny Winter his first pair of sandals, the black straps dark against his pale while calves. They started taking homemade items on consignment like beaded necklaces and chicken bone necklaces. They sold pipes, papers, scales and other types of paraphernalia. They expanded into selling toys, books and underground comix, clothing, used records, beaded curtains, batik bedspreads. They would hold book signings by local artists and give away free local art posters to shows at the Armadillo World Headquarters and Soap Creek Saloon calendars of band appearances. They had the very first black light poster room in Austin, perhaps in all of Texas. A cat named Lisa who liked to sleep on the cash register provided security.

However, they were always more than just a store. They were a cultural hub and a nexus for a community of people that was rising up in Austin and around the nation. The core was those people called hippies, but it was more than that. A cultural and spiritual community that was producing art and music had never been seen before, a community of people finding their way towards a way of life and an attitude toward life that had not been invented yet. It was a time of communes and experimentations to try to attain a way of life to replace the old and staid way of life that their parents had been trapped by. These were the people that Oat Willie’s served and helped towards a fresh new view of life and our relationships.

The South Austin Museum of Popular Culture is proud to help celebrate the fortieth anniversary of Oat Willie’s, an Austin institution, by displaying art produced on behalf of the company by a plethora of local artists.

The South Austin Museum of Popular Culture, at 1516 South Lamar, invites you to the opening of their exhibit of the art produced by, and devoted to, the famous Oat Willie’s. This exhibition is comprised mostly of original pen and ink drawings fashioned over the last forty years by local Austin artists and will begin at 7:09 pm on the evening of May 24th, 2008.

Looking back on Oat Willie’s, by John Kelso / Austin American-Statesman.

This entry was posted in RagBlog and tagged Austin, Counterculture, Drugs, History, Sixties. Bookmark the permalink.