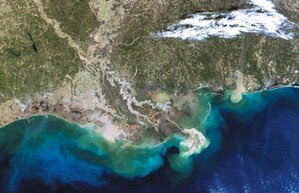 NEW ORLEANS — Scientists have issued a report urging immediate government action to reduce urban and Midwest farmland runoff blamed for feeding an 8,000-square-mile dead zone in the Gulf of Mexico, an oxygen-deprived pool of water that has grown alarmingly off the mouth of the Mississippi River.

A report on Thursday by the National Research Council, a scientific and technology non-profit institution created by Congress, exhorted the federal government to take quick steps to avoid a tipping point and avert an ecosystem collapse similar to what has happened in the Chesapeake Bay and Denmark’s coastal waters.

“Action and progress … have been stalled for years,” the report said in calling for “decisive, immediate actions” to curtail polluting runoff from several Midwestern states that feed the Mississippi River and are blamed as factors in the dead zone’s growth.

The report called for the Environmental Protection Agency and U.S. Department of Agriculture to join in creating a Mississippi River Basin Water Quality Center to coordinate efforts. Pilot projects should be directed at reducing nitrogen and phosphorous runoffs seen as one culprit.

Scientists say the low-oxygen zone — created by massive algae blooms that consume oxygen in waters off Louisiana, Mississippi and Texas — makes it harder for organisms to survive, robbing them of reproductive energy needed to continue life in those waters. The low-oxygen condition is called hypoxia by scientists.

“The existence of gulf hypoxia is a national-level water quality problem that has been persistent, has become larger over time, and will require decisive actions to remedy,” the report warned.

Recent studies, funded by the National Oceanic and Atmospheric Administration and others, have found the dead zone is tampering with the Gulf food chain. The term scientists use to describe changes in the food chain is a “regime shift” in the oxygen-deprived waters

The dead zone was first studied in the 1970s. Since then, the zone has grown and scientists warn it could threaten Gulf fisheries, where the largest fleet of fishermen in the Lower 48 states works.

Studies show the health of copepods, small crustaceans grazed on by larger species, and shrimp have been affected by the dead zone.

“What we’re finding is that we see these regime shifts sometimes where instead of producing a normal food chain we wind up with just jellyfish,” said Paul Montagna, a biologist at Texas A&M University-Corpus Christi.

He said the problem is “very complex” and “very real.”

In recent years, the dead zone has gotten so big that it has stretched from the Texas coast to Mississippi. The low-oxygen area dissipates in the winter months and returns in the spring and summer.

Federal agencies besides NOAA are beginning to acknowledge the phenomenon.

Last year, a report by the Environmental Protection Agency said a “regime shift” in the Gulf caused by the annual flushing of nitrogen and phosphorous from the Midwest through the Mississippi had taken place, the NRC report noted.

The NRC report, requested by EPA, was a follow-up to a 2007 document outlining the dead zone problem.

“If you put her up against the current EPA administrator, Stephen Johnson, she’s a breath of fresh air,” said Monique Harden, co-director of the New Orleans-based Advocates for Environmental Human Rights.

She is the chief of staff of New Jersey Gov. Jon Corzine and was a member of Obama’s energy and natural resources transition team. Previously, she worked 16 years at EPA.

She was born in Philadelphia and raised by adopted parents in the Lower 9th Ward, where her family was living when Hurricane Katrina destroyed the neighborhood in August 2005.

On Friday, EPA said it planned to send $3.7 million to 10 groups and organizations in the upper Mississippi River basin to restore wetlands and riverbanks, clean watersheds and document water quality.

“This seed money will grow innovative, cost-effective solutions to speed up the cleanup of impaired watersheds in the Mississippi River Watershed and cut the size of the dead zone in the Gulf of Mexico,” said Benjamin Grumbles, EPA assistant administrator for water.

This entry was posted in RagBlog and tagged Agriculture, Ecology, Environment. Bookmark the permalink.