Bad Boogie at Austin’s KUT : ‘We Built This City’ 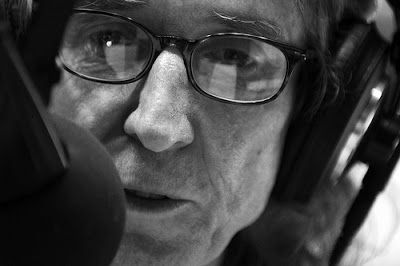 Programming changes at KUT have cut longtime hosts Paul Ray and Larry Monroe to one night a week each. “Paul Ray’s Jazz” and Larry Monroe’s “Phil Music Program” are being replaced on KUT (FM 90.5) by “Music with Matt Reilly,” hosted by KUT’s new assistant music director.

In another change, KUT will air “Undercurrents,” a three-hour national music show hosted by Gregg McVicar, at midnight Monday through Thursday to replace overnight programming hosted by Monroe and Ray.

In all, Ray will lose 14 hours of air time a week, with Monroe broadcasting 10 fewer hours a week…

See ‘Time to break out the torches and pitchforks? Format change at KUT’ by John Conquest, Below.

When I first heard the old Starship song, “We Built This City,” I giggled. By the third time I heard it, I automatically guffawed. Don’t know why, but it always made me hysterical.

Today, I’m not laughing, and the damned song finally means something to me. I’m watching the denigration of two guys who literally built this city, Paul Ray and Larry Monroe. All but seven hours of their programming has been wiped from the face of the earth by KUT, much of it replaced by canned programming from California.

And they did help build this city as we know it, along with a generation of us who demanded a different lifestyle. We made Austin completely unique, unlike any other destination. Decades later, the city is still one-of-a-kind, and a virtual oasis of truth in the midst of the American desert. Because of folks like Larry and Paul, whose voices through the night have charmed and engaged us. And they have educated us about ourselves, our music, and our village.

This is why, when Lee Cooke, our last Republican mayor, and a good bloke, came to me with a group of fellow citizens and asked what I thought we should do to get Paul’s and Larry’s shows all back on the air, I told him we needed to bloody our hands. We need to do absolutely anything in our power to keep Austin and its public radio station in the hands of the community that pays for its existence. As I mentioned in my recent “manifesto,” that means anything right up to full boycott at fundraising time.

This is our public radio station — we pay for 85% of its budget, and we choose to, in the words of Darrell Royal, “dance with the ones who brung us.” The fact is, Paul and Larry are still building this city, platter by platter and segue by segue. And the city wants to keep them. Believe me, I know: virtually everyone in this town has emailed me this weekend.

We are calling for a Town Hall Meeting for August 5th, at 7:00 p.m. at Threadgills to discuss what actions we may need to take to restore Paul and Larry fully on our radio station. Please come help us return KUT to the public that owns it.

Meanwhile, please voice your displeasure to KUT General Manager Stewart Vanderwilt. This is his email: svanderwilt@kut.org. Next week, we’ll pass out board members’ emails. 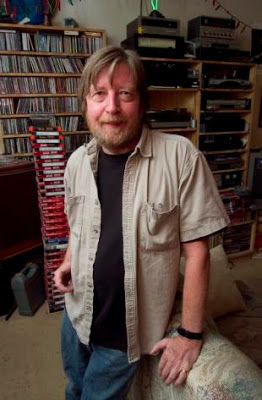 KUT’s Larry Monroe. Photo by Bret Gerbe for the Austin American Statesman.
Time to break out the torches and pitchforks?
Format change at KUT

So how do a new arrival and a Californian DJ get to take over from two Austin institutions? Simple, they’re cheaper.

Michael Corcoran of the Austin American-Statesman only reported the basic facts, released, Palin-style, on the Friday before the 4th of July, that Larry Monroe’s Phil Music and Paul Ray’s Jazz are being replaced by Music with Matt Reilly, hosted by KUT’s new assistant music director, and Ray and Monroe’s overnight programming by a show called Undercurrents.

I was a little puzzled by Corcoran’s reticence as, in his shoes, I’d’ve been just a tad snarky, but maybe he knew the comments at the paper’s Austin360 website would do the heavy lifting for him, revealing the undercurrents concealed beneath those basic facts.

Let’s start with what KUT will now be airing from midnight to 3 a.m., Monday to Thursday. “Undercurrents” is a syndicated radio show that originates in — California. Of course, there’s no law that says you can’t promote Texas music unless you’re physically in Texas, but scanning through Gregg McVicar’s latest playlists, I didn’t spot a single Texas artist. However, there were plenty of people whom Austinites are crying out to hear because they just don’t get enough airplay — The Beatles, The Eagles, The Doors, The Rolling Stones, Jackson Browne, Beck and Sheryl Crow.

Which rather neatly brings us to, Who the fuck is Matt Reilly? Well, he came to KUT, via WXPN, Philadelphia, from KGSR (“all Sheryl Crow, all the time”). This is not, in itself, grounds for breaking out the torches and pitchforks, after all, Folkways host Kevin Connor spent many years at KGeezer without going over to the dark side, but, on the other hand, it sure is grounds for priming the torches and honing the pitchforks. So far, I haven’t caught Reilly’s show, about which the KUT website reveals absolutely nothing, which is pretty suspicious, but reliable sources tell me it’s just like listening to KGSR.

So how do a new arrival and a Californian DJ get to take over from two Austin institutions? Simple, they’re cheaper. Monroe has been with KUT for 28 years, Ray almost as long, putting them among the station’s highest paid non-management employees. By cutting them back to joke hours (Ray retains “Twine Time,” Monroe “Blue Monday”) and replacing them with a management level staffer and a syndicated show, KUT saves some money as Monroe and Ray can kiss their benefits goodbye.

However, though screwing two veteran and highly regarded DJs in unconscionable enough, you don’t have to be overly paranoid to suspect a deeper evil — format.

The top KUT managers came to Austin from Indiana (where GM Stewart Vanderwilt saddled WBST with massive debts — ironically, the station where Larry Monore started his radio career), Utah, Vermont and Alabama, and will doubtless depart when they get better offers elsewhere, the point being that they have no roots, hence no understanding of local tradition.

Careerists, whose priorities are ratings and fundraising, use standard industry strategies — if this worked in Seattle, it’ll work here — too bad if shows that have long been part of the fabric of Austin life become roadkill in the process.

The strategy that seems to be evolving at KUT is emulating KGSR’s AAA programming, with restrictive playlists, heavy to light rotation, so many new album tracks per hour, all the mechanical controls that make the station such horrible, repetitive shit. The fatal flaw in this, of course, is that there’s already one KGSR and it doesn’t hit you up for money every five minutes.

There are many eminently quotable comments in Michael Corcoran’s story, which, among other things, revealed a high level of disdain for John Aielli and Eklektikos (which has also been cut back), but I’ll go with 3CM subscriber Patrick Hurley’s, because it makes some cogent points, is in itself revealing, plus I can get his OK to use it.

“A most basic requirement of public radio in Texas is to promote things Texan — including its music, the best in the land. Who better to do this than the person who has done it most successfully for 28 years on KUT — Larry Monroe. The programs remained fresh, with a healthy mix of classic Texas music and the best of new and upcoming Texas artists. KUT seems to want to relegate Texas music to the trash can and replace it with some mix of ‘American’ music. They say the changes were made to better blend daytime and evening programs. There is no radio station that has increased its audience by blending daytime and evening music programs. Daytime programming is for a general audience while evening radio audiences are more discerning and eclectic. Larry Monroe understands this basic principle. It is a very sad day indeed when KUT loses the plot completely.”

Bear in mind that Patrick lives in Ireland. Unless they have Sirius XM, Austinites away from their computers have severely limited choices, I mean, KOOP (91.7) is preselected on the Dogmobile radio, but that’s only any use 9 a.m. to 11a.m. except Mondays, oh and 11am to noon Wednesdays; after that I’m out of luck if I don’t have any CDs with me. However, Patrick listens to KUT online, which means he’s chosen it from a gazillion alternatives because it’s different. If it stops being different, will he still listen? Hell, no.

Some years ago, KNON hired a GM who decided to compete with Dallas’ commercial hip hop and rap stations. He was fired a few months later when the next pledge drive raised like 65¢. I think you can see where I’m going here — next pledge drive, I urge you to punish KUT’s management, whose salaries, by the way, eat up most all of the first million raised, by withholding your donations unless and until you see tangible proof — reinstating Phil Music would be a good signifier — that they realize they fucked up. We can get syndicated shit anywhere.

[John Conquest is the publisher and editor of 3rd Coast Music.]

25 Responses to Bad Boogie at Austin’s KUT : ‘We Built This City’