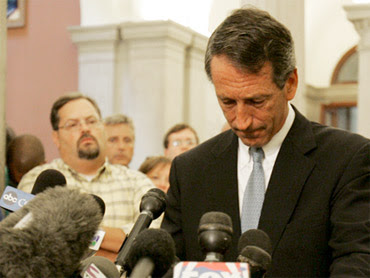 On June 4, the state Supreme Court ruled 5-0 against Gov. Sanford, finding that he must apply for the $700 million in federal stimulus money for its intended purposes, including educational enhancement.

According to his staff, missing South Carolina Governor Mark Sanford was merely enjoying Father’s Day away from his family, hiking the Appalachian Trail. This prompted the observation from TV commentator Keith Olbermann that Father’s Day was also “national hike naked day.” One might wonder if perhaps Sanford was at a rendezvous in the woods with fellow Republicans Mark Foley, Larry Craig, and Charlie Crist. Olbermann’s guest, columnist Gene Robinson, mentioned something about a movie called Deliverance…

Upon his re-appearance, Gov. Sanford, contrary to the staff cover story, revealed that he was having a tryst in Argentina.

This has not been Gov. Sanford’s first brush with notoriety.

Ty-Sheoma Bethea, an 8th grader from J.V. Martin Jr. High in Dillon, South Carolina, was invited to sit next to Michelle Obama during President Obama’s Feb. 24 address to a joint session of Congress. Obama quoted from a letter Ms. Bethea had sent Congress about the deplorable condition of her school, “we’re not quitters,” as part of the urgent necessity of passing a stimulus program benefiting education and other needs.

It seemed apparent that relief was on the way, and that J.V. Martin Jr. High would almost certainly be earmarked for reconstruction assistance. Then Gov. Sanford intervened, refusing to apply for the stimulus money unless he could use it to pay down state debt rather than for its intended purposes.

Shortly thereafter, two other South Carolina students got involved. Casey Edwards, a senior at Chapin High in Chapin, and Justin Williams, a third-year University of South Carolina law student, acted as lead plaintiffs in the suit Edwards and Williams v. State, and SCASA (South Carolina Association of School Administrators) v. Sanford. On June 4, the state Supreme Court ruled 5-0 against Gov. Sanford, finding that he must apply for the $700 million in federal stimulus money for its intended purposes, including educational enhancement.

Conditions in schools like J.V. Martin Jr. High along South Carolina’s I-95 “Corridor of Shame” were cited by Edwards and Williams as primary reasons for their suit.