And how many other King George projects will prove to be just a bit oversized for reality? We won’t be hearing the last of this sort of thing for awhile, me thinks. 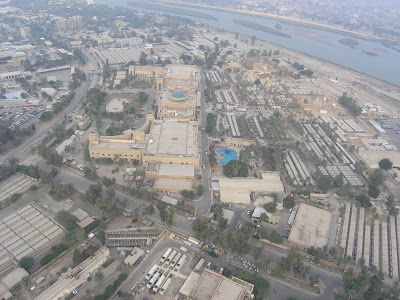 WASHINGTON — The U.S. Embassy in Iraq, the government’s largest overseas diplomatic mission, is significantly overstaffed and needs to be downsized to reflect the reduced American role in the country, according to a new State Department report.

“There is a clear consensus from the top to the bottom of the embassy: The time has come for a significant rightsizing,” says the report Wednesday by the department’s inspector general.

The report came as President Barack Obama met Iraqi Prime Minister Nouri al Maliki in Washington for talks on the significant changes in the U.S.-Iraqi relationship. American combat troops ceased operations in Iraqi cities on June 30, Maliki’s government has become more assertive about exercising Iraqi sovereignty and Obama has shifted the attention that his predecessor put on Iraq to Afghanistan and Pakistan.

In addition to downsizing the embassy, the report recommends ending the Provincial Reconstruction Teams by 2011, which have been the prime U.S. tool for rebuilding civilian life in Iraq’s provinces.

“For some, it (the downsizing) is much overdue, as they believe the ‘civilian surge’ went too far,” the report says. “For others, it is a necessary result of the now-changed circumstances in Iraq and in our bilateral relationship.”

The American Embassy in Baghdad became a symbol of the Bush administration’s ambitions to remake Iraq. A huge new structure was built on the banks of the Tigris River, at a cost of more than $700 million, and hundreds of civilian experts from agencies across the U.S. government were deployed to help with reconstruction.

The 103-page inspector general’s report gives high marks to embassy personnel for what it calls an exemplary relationship between American civilians and the U.S. military in Iraq.

It also reports that there is “a culture of working seven days a week.” Given the near-constant security threats, “almost any other (American diplomatic) mission would have remained closed,” it says.

The report recommends, however, that the State Department launch a review to downsize the embassy staff. It says that at the new compound, which became fully occupied in January, 1,200 people are “jammed into apartments designed for about 600.”

“After rightsizing, the embassy should be able to carry out its mission in Iraq with a staff able to fit comfortably in 600 apartments,” it says.

A senior State Department official, who spoke only on the condition of anonymity because the official wasn’t authorized to be quoted by name, said that newly arrived U.S. Ambassador Chris Hill was reviewing staffing levels in Baghdad.

The report says that with former President George W. Bush’s emphasis on Iraq, the embassy was permitted to grow largely without regard to the usual budget constraints on U.S. missions overseas.

“Given the high priority placed on Iraq, and the policy of the previous administration to encourage all relevant U.S. agencies to send employees to the embassy and the PRTs, many of the normal limits on staffing have not been imposed,” it says. “Cost has not seemed to be a factor.”

The embassy employs 1,873 people, including locally hired staff, and more than 13,000 contractors, the report says.

Thanks to Juan Cole, especially for the “Duhhh !!” in the headline / The Rag Blog