Bailout Blues: We Ain’t Seen Nothing Yet 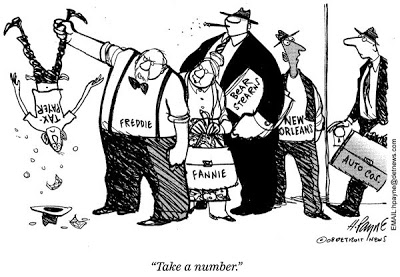 Leave it to Fannie and Freddie to do for American politics what reasoned argument failed to do–strip the clothes off the Emperor of Markets. The fuss over whether government should rescue naughty shareholders was merely a distraction. What this latest financial crisis revealed is that “the government” and “the market” are not two distinct and separate parts of the country. They work together and need each other.

Ever since Ronald Reagan declared in his first inaugural address that “in the present crisis, government is not the solution to our problem, government is the problem,” conservatives have been steadily privatizing government functions on the theory that free markets can do everything better. Education, medicine, criminal justice, social services, building and maintaining roads and bridges, supporting an army at war–you name it, it has all been contracted out to allegedly more efficient and innovative private enterprise.

Self-interest, profits and free markets, we have been promised, are the great social engines. Now, as the American housing market collapses and the world trembles before our mistakes, those profit-driven, supposedly self-correcting and perfectly efficient engines are turning against us like Frankenstein. Why did anybody ever believe that CEOs and shareholders whose every incentive leads them to seek greater profits would care about anything else, such as their purported government mission to foster homeownership and stable communities?

It’s telling that the very officials who have been dead-set against regulation and bailouts justify the new government plan as necessary to restore confidence. The markets are perfectly healthy, they kept saying, but the public’s confidence is faltering. On July 17, just after the big bailout was proposed, Fannie Mae’s CEO, Daniel Mudd, told Newshour’s Judy Woodruff, “Fannie Mae is very financially sound. We have . . . more capital than we’ve had at any point in our history.” If your capitalization is as strong as you say, asked Woodruff, why do you need this Treasury plan to help you out? “All the capital markets, the lending markets, are really built on confidence,” Mudd replied. “Confidence has gotten jittery over the past quarter or so.” It’s important, he continued, “that there be a strong backstop (Mudd never uttered the words “bailout” or “rescue”) in case that kind of lack of confidence and that kind of jitteriness continued for too long.”

With the bailout, these officials admitted what Reagan and all the government denigrators denied. Only government can provide the rock-solid confidence that markets and communities need to function.

Who’s taking away people’s homes right now in the foreclosure frenzy? Not government. Well, not unless we remember that government could have done a better job reining in mortgage lenders and Fannie and Freddie. If indeed government is responsible for this mess, its fault was inaction. Finally, in the present crisis, government sees itself once again as the solution.

But restrain your hopes, because here’s how Treasury Secretary Henry Paulson conceived the bailout. It would arm him, he told Congressional leaders, “with a bazooka in my pocket to pull out when we need to it to shoot down.” Excuse me? The top official of the U.S. economy thinks he’s a guerrilla armed only with a bazooka? Please, sir, it’s time to step into uniform and use your authority and modern regulatory tools to build a strong mortgage system instead of waiting to take pot shots at misguided missiles.

No, government is not the problem. Leadership is.

About Deborah Stone: Deborah Stone, a senior fellow at Demos, is the author of The Samaritan’s Dilemma: Should Government Help Your Neighbor? just published by Nation Books.