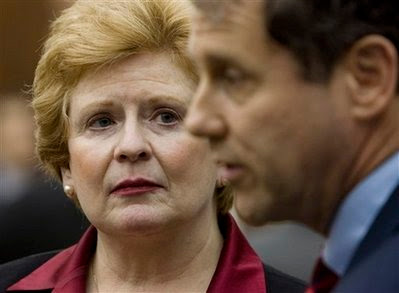 The Republican Party, now the Party of ‘Southernism,’ always aimed at killing the UAW in this ‘bailout.’ As low as the wages are that the UAW agreed to in their 2007 contract, they are not as low as the non-union wages paid by Toyota, Honda, Hyundai and Mercedes-Benz in their factories spread through the Old Confederacy, land of the ‘right to work.’

See ‘From the front lines in the class war’ by Steve Russell. and ‘Auto bailout talks collapse as Senate deadlocks over wages’ by Paul Kane, Below.

Republicans killed the auto bailout Thursday night when Democrats refused to agree to the Big Three automakers being required to achieve wage parity with Japanese car factories in the South by the end of the 2009.

Well, now we have the real deal, out on the table for all to see.

The Republican Party, now the Party of “Southernism,” always aimed at killing the UAW in this “bailout.” As low as the wages are that the UAW agreed to in their 2007 contract, they are not as low as the non-union wages paid by Toyota, Honda, Hyundai and Mercedes-Benz in their factories spread through the Old Confederacy, land of the “right to work.”

The Southern Republicans who control the party now are terrified of the Employee Free Choice Act, which will be passed next year, and which would give the UAW a strong tool to break the back of the Southern reactionaries who have always dominated the Southern economy. Unionism might have brought the thing the old slaveocracy (however it’s disguised itself in the past 140 years) has always, always feared: that the lower classes in the South might finally open their eyes and start acting in their own best economic interests, which would mean the end of Southernism. They’re so afraid of this, they’re willing to see the country fall apart, which is the course they have set us on.

From the front lines in the class war

So, last night after prime time, senate Repugs killed the Detroit bailout over….the guys on the line making too much money.

This is the most flagrant shell heaved at the working class since Reagan claimed the way to balance the budget was to make people who waited tables pay all the taxes due on their tips.

No, the Dems did not even come close to having the votes for cloture. But I, for one, would have loved the symbolism of a real live filibuster running over Christmas where the major issue is American workers making too much money!

The last blows of the negotiation, if I am correctly informed, was the Repugs demanding that the UAW take wage cuts immediately that are currently contracted to hit in 2010.

The UAW agreed provided they be given a seat on the GM board.

So you can see the union was hell bent on class warfare, eh?

An eleventh-hour effort to salvage a proposed $14 billion rescue plan for the auto industry collapsed late last night as Republicans and Democrats failed to agree on the timing of deep wage cuts for union workers, killing the legislative plan and threatening America’s carmakers with bankruptcy.

“We’re not going to get to the finish line. That’s just the way it is. There’s too much difference between the two sides,” Senate Majority Leader Harry M. Reid (D-Nev.) announced after 10 p.m., concluding a marathon negotiating session that ended in gridlock. Reid warned that financial markets could plummet when trading opens this morning.

“I dread looking at Wall Street tomorrow. It’s not going to be a pleasant sight,” he said.

The legislation would have provided emergency loans to General Motors and Chrysler, which have said they face imminent collapse without federal help. The high-stakes talks broke down over when the wages of union workers would be slashed to the same level as those paid to nonunion workers at U.S. plants of foreign automakers such as Toyota and Honda.

Sen. Bob Corker (Tenn.), the lead GOP negotiator, said the sides were on the brink of a deal on the amendment he had offered. Representatives from the United Auto Workers — who were present for most of the negotiations — would not agree to a specific date, Corker said.

Minutes after the talks failed, the Senate voted on the bailout measure that had been approved Wednesday by the House on a largely party-line vote, 237-170. In the Senate, the vote was 52-35, eight votes short of the 60 needed to override a Republican filibuster. Of those voting yes, 10 Republicans joined 42 Democrats.

“It’s disappointing that Congress failed to act tonight,” the White House said in a statement. “We think the legislation we negotiated provided an opportunity to use funds already appropriated for automakers and presented the best chance to avoid a disorderly bankruptcy while ensuring taxpayer funds only go to firms whose stakeholders were prepared to make difficult decisions to become viable.”

GM said last night it was “deeply disappointed” that negotiations failed to produce an agreement. “We will assess all of our options to continue our restructuring and to obtain the means to weather the current economic crisis,” the company said in a statement.

A Chrysler spokeswoman said the company would “continue to pursue a workable solution to help ensure [its] future viability.”

The Senate closed out its legislative session for the year but will stay open for pro forma sessions until the next Congress begins Jan. 6. Reid and Senate Minority Leader Mitch McConnell (R.-Ky.) agreed that the auto rescue would not happen this year.

Auto industry executives and lawmakers supportive of the industry have said they hope that the Federal Reserve might step in with a loan or that Treasury Secretary Henry M. Paulson Jr. might provide emergency funding from the government’s financial rescue program. But Paulson and others in the Bush administration — which had urged the Senate to pass the bailout measure approved by the House — have argued that the rescue program is intended to stabilize the financial services industry and should not be used for other purposes.

“That is the only viable option available at this time,” House Speaker Nancy Pelosi (D-Calif.) said in a statement after the Senate vote.

In discussions with the White House this week, congressional Democrats again raised the idea of funding the automaker bailout out of the rescue program. White House spokesman Tony Fratto said yesterday before the talks collapsed that the administration “has not engaged” lawmakers on the proposal.

The failed negotiations came despite a plea earlier in the day from President-elect Barack Obama for passage of the legislation to spare GM or Chrysler from having to file for bankruptcy protection, a prospect that has grown real enough for both firms to hire lawyers to deal with such a scenario. Chrysler acknowledged last week that it was working with Jones Day; last night, sources said GM had hired Weil, Gotshal & Manges, as well as turnaround veterans William Repko of Evercore Partners, Arthur Newman of Blackstone Group and Jay Alix.

It wasn’t clear whether GM, in particular, could survive until January. If the industry can hang on that long, Reid said last night, the legislation would be revived next year — when a Democratic majority in the Senate might be large enough to defeat any GOP filibuster attempts.

Corker and Sen. Christopher J. Dodd (D-Conn.), chairman of the Banking Committee, had led negotiations all afternoon and into the evening trying rescue the faltering proposal.

The negotiations were based on a plan advanced by Corker, the most junior member of the Banking Committee. His proposal sought to reduce the wages and benefits of union workers by requiring the automakers’ total labor costs to be “on par” with Honda and Toyota.

The two sides agreed to most other issues, including those requiring automakers to reduce their debt obligations by at least two-thirds through an equity swap with bondholders. Payouts to workers who are laid off or temporarily furloughed would have been terminated.

Ford, unlike General Motors and Chrysler, has said it does not need bridge loans at this point and would not need to agree to those conditions.

But no agreement could be reached on the wage reductions. “It sounds like UAW blew up the deal,” Sen. Jim DeMint (R-S.C.) said afterward.

The initial agreement in the House called for the government to issue the loans to GM and Chrysler as early as next week and for President Bush to immediately name a “car czar” to oversee the bailout. The companies would be required by March 31 to cut costs, restructure debt and obtain concessions from labor sufficient to report a positive net present value.

If the firms failed to make progress toward that goal, the agreement would have required the car czar to revoke the loans and develop a new plan that could have included the option of seeking Chapter 11 bankruptcy protection. If the companies had failed to agree on steps to guarantee their long-term survival, they would have been denied additional federal assistance.

Corker — a freshman senator who a few years ago was mayor of Chattanooga — was a strong opponent of the House plan to save the automakers.

He and other Republicans had revolted against the earlier plan because they thought it did not go far enough in forcing contracts on the UAW. GM officials have told Congress, for instance, that under the most recent contract, labor costs would be about $62 per hour in 2010 — $30 per hour in wages and slightly more than that in benefits to current workers and retirees. That’s about $14 per hour more than at Toyota’s U.S. plants.

Some Republicans said they doubted that the automakers could remain viable and return to profitability. Others, frustrated with the Treasury’s financial rescue program, were skeptical of approving another bailout.

The Corker plan was the last chance at passing any legislation for the auto industry, senators said.

1 Response to Bailout Bust : Southern Republicans Strike Out at Unions