Bailout : Idiots in Detroit Can’t Even Get an Electric Car Right 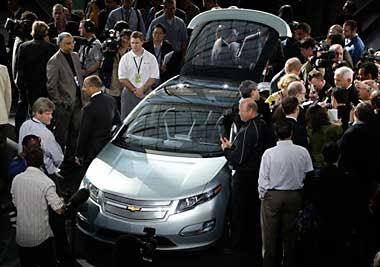 Electric Edsel? GM unveils the Volt.
‘At this point, since the Democrats in Congress and the White House are congenitally incapable of imagining a state-owned or partially state-owned enterprise, it would be better to just let GM go under.’
By Dave Lindorff / November 24, 2008

It’s a safe bet that within the next several months, Congress will vote to bail out General Motors. It will be a colossal boondoggle involving, probably, upwards of $50 billion when it’s through, and it will fail in the end.

The reason is before our eyes. This bloated megacorporation is being run by idiots.

For years, as it became evident to everyone that oil prices were going to soar because demand has been exceeding both production and supply and will continue to do so, it has been obvious that to succeed, a car company had to offer well-made cars that could demonstrate high gas mileage. GM, perhaps more than any other company, ignored that reality and has been paying the price, watching its share of the car market wither.

Now the company, worth about what Starbucks used to be worth, its stock now down to where it was in the depths of the Great Depression, has bet the farm on a new car, the Volt, which it promises will, two years from now, be able to go all of 40 miles purely on electric power. It will have a motor too, and not a small one, but rather one the size of what you get in a typical conventional Honda Civic—1.4 ltr. That motor wouldn’t drive the car; rather it would keep charging the Volt’s huge lithium-ion battery so the car could keep going for a few hundred miles.

The management wizards at GM obviously don’t do much driving. If they did, and found themselves in typical commuter traffic, they’d see that maybe 90% of the cars, or more, have only one person in them. Occasionally, they’d see a passenger. On a typical 45-minute trip from the burbs into Philadelphia at rush hour, I can count the number of cars I see with three or more people in them on my fingers.

So why is GM making the Volt as a full-sized four or five-passenger car? That’s not where the market for an electric car is. What is needed is a two-seater little car.

Because GM is trying to make an electric family car, they’ve made something so big that, if they are lucky, they’ll be able to get it to 40 miles on electric drive only, but at a cost in excess of $40,000 and perhaps much higher, which will put it out of almost everyone’s reach. The car is destined to be a bust.

And yet, because President-elect Obama will want to win Michigan next election, and because Congressional Democrats don’t want to be seen as ignoring the fate of GM’s workers, GM will be bailed out and the Volt will be funded right through to its introduction and subsequent disaster in the market.

I’m not opposed to the idea of government support of industry, but that support has to involve government input or even control over decision-making.

Making an overpriced electric family car is not.

At this point, since the Democrats in Congress and the White House are congenitally incapable of imagining a state-owned or partially state-owned enterprise, it would be better to just let GM go under, and maybe Ford too, if it comes to that (another stupid company). The pieces could be sold off, and allowed to sink and swim on their own. Maybe one of those smaller, more entrepreneurial fragments would see the wisdom of developing what the public really needs.

The truth is that the entrepreneurs over at Tesla, a star-up in California, have already made that car—a high-performance two-seater commuter car that can go 200 miles on a charge and that doesn’t need an auxiliary engine. Their problem is that small size and too little capital have forced them to pimp it up into a high-priced luxury show-off item for rich people costing $100,000. If they were to team up with a GM spin-off—say Saturn—they could make a stripped-down version of that baby and crank out 100,000 of them to start at a price ordinary people could afford.

Meanwhile, regarding those poor autoworkers, they have a legitimate complaint. While Republicans like to blame the auto industry’s problems on them, saying they have demanded too much pay, and too much in healthcare benefits, it’s not their fault that GM and Ford executives have been stupid and greedy and short-sighted (besides, the high wages and benefits that the United Auto Workers won over decades of bitter struggle helped to set standards that raised the wages of all workers across the nation). But let’s do the math. There are about 125,000 unionized hourly workers at the two companies. For a lousy $8.7 billion, every one of those people could receive a $70,000 buyout from Congress. Double that if you want to give them two years to adjust and find new work at an electric car plant or something else. That would cost $17 billion, or less than half of what the doomed bailout of GM is going to end up costing.

And of course, with the rest of us suffering from the massive mismanagement of the nation’s economy by its corporate leaders and their puppets in Washington, there’s no reason why our tax dollars should be subsidizing those particular workers tat that high a level. After all, companies are failing and will be failing all over the place, without such largesse. Besides, if the bailout goes ahead, all it will do is delay the time these workers will be out on the street anyhow.

The point is, however, there are more cost-effective ways to help out workers in failing businesses than to have the government simply subsidize the continued operation of enterprises that have been destroyed by management. In truth, all the talk in congress and in the Obama camp about rescuing jobs is just a cover for bailouts that are really aimed at rescuing managers and investors, not workers.

[Dave Lindorff is a Philadelphia-based journalist and columnist. His latest book is “The Case for Impeachment” (St. Martin’s Press, 2006 and now available in paperback edition.) His work is available at www.thiscantbehappening.net. ]

1 Response to Bailout : Idiots in Detroit Can’t Even Get an Electric Car Right