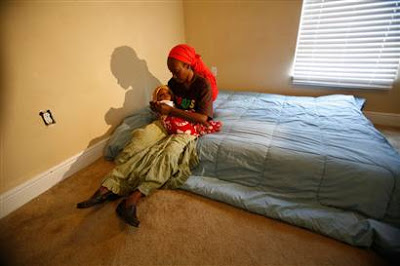 Marie Nadine Pierre and her baby, Nennon, are squatting in a foreclosured house in Florida. Photo by J. Pat Carter / AP
‘”We’re matching homeless people with people-less homes,” he said with a grin.’
December 1, 2008

MIAMI – Max Rameau delivers his sales pitch like a pro. “All tile floor!” he says during a recent showing. “And the living room, wow! It has great blinds.”

But in nearly every other respect, he is unlike any real estate agent you’ve ever met. He is unshaven, drives a beat-up car and wears grungy cut-off sweat pants. He also breaks into the homes he shows. And his clients don’t have a dime for a down payment.

Rameau is an activist who has been executing a bailout plan of his own around Miami’s empty streets: He is helping homeless people illegally move into foreclosed homes.

“We’re matching homeless people with people-less homes,” he said with a grin.

Rameau and a group of like-minded advocates formed Take Back the Land, which also helps the new “tenants” with secondhand furniture, cleaning supplies and yard upkeep. So far, he has moved six families into foreclosed homes and has nine on a waiting list.

‘Everyone deserves a home’

“I think everyone deserves a home,” said Rameau, who said he takes no money from his work with the homeless. “Homeless people across the country are squatting in empty homes. The question is: Is this going to be done out of desperation or with direction?”

With the housing market collapsing, squatting in foreclosed homes is believed to be on the rise around the country. But squatters usually move in on their own, at night, when no one is watching. Rarely is the phenomenon as organized as Rameau’s effort to “liberate” foreclosed homes.

Florida — especially the Miami area, with its once-booming condo market — is one of the hardest-hit states in the housing crisis, largely because of overbuilding and speculation. In September, Florida had the nation’s second-highest foreclosure rate, with one out of every 178 homes in default, according to Realty Trac, an online marketer of foreclosed properties. Only Nevada’s rate was higher.

Like other cities, Miami is trying to ease the problem. Officials launched a foreclosure-prevention program to help homeowners who have fallen behind on their mortgage, with loans of up to $7,500 per household.

The city also recently passed an ordinance requiring owners of abandoned homes — whether an individual or bank — to register those properties with the city so police can better monitor them.

Elsewhere around the country, advocates in Cleveland are working with the city to allow homeless people to legally move into and repair empty, dilapidated houses. In Atlanta, some property owners pay homeless people to live in abandoned homes as a security measure.

From shelter to home

In early November, Rameau drove a woman and her 18-month old daughter to a ranch home on a quiet street lined with swaying tropical foliage. Marie Nadine Pierre, 39, has been sleeping at a shelter with her toddler. She said she had been homeless off and on for a year, after losing various jobs and getting evicted from several apartments.

“My heart is heavy. I’ve lived in a lot of different shelters, a lot of bad situations,” Pierre said. “In my own home, I’m free. I’m a human being now.”

Rameau chose the house for Pierre, in part, because he knew its history. A man had bought the home in the city’s predominantly Haitian neighborhood in 2006 for $430,000, then rented it to Rameau’s friends. Those friends were evicted in October because the homeowner had stopped paying his mortgage and the property went into foreclosure.

Rameau, who makes his living as a computer consultant, said he is doing the owner a favor. Before Pierre moved in, someone stole the air conditioning unit from the backyard, and it was only a matter of time before thieves took the copper pipes and wiring, he said.

“Within a couple of months, this place would be stripped and drug dealers would be living here,” he said, carrying a giant plastic garbage bag filled with Pierre’s clothes into the home.

He said he is not scared of getting arrested.

“There’s a real need here, and there’s a disconnect between the need and the law,” he said. “Being arrested is just one of the potential factors in doing this.”

Miami spokeswoman Kelly Penton said city officials did not know Rameau was moving homeless into empty buildings — but they are also not stopping him.

No actions to stop

“There are no actions on the city’s part to stop this,” she said in an e-mail. “It is important to note that if people trespass into private property, it is up to the property owner to take action to remove those individuals.”

Pierre herself could be charged with trespassing, vandalism or breaking and entering. Rameau assured her he has lawyers who will represent her free.

Two weeks after Pierre moved in, she came home to find the locks had been changed, probably by the property’s manager. Everything inside — her food, clothes and family photos — was gone.

But late last month, with Rameau’s help, she got back inside and has put Christmas decorations on the front door.

So far, police have not gotten involved.

Thanks to Sarito Carol Neiman / The Rag Blog