This sickens me – Barack Obama is proving himself to be as big a war criminal as George Bush, Dick Cheney, Don Rumsfeld, and the rest of the gang. Let me be the first to call for Barack Obama’s impeachment and prosecution as a war criminal. Closing Guantanamo is just lip service – the real agenda is “stay the course.” Disgusting !! 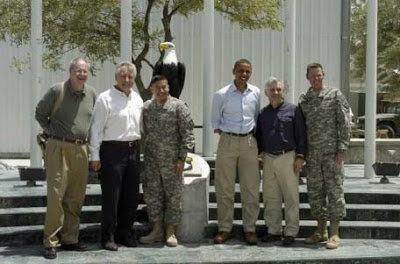 As Democratic candidate for the United States presidency last July, Barack Obama posed for this photograph with senior American military staff at the Bagram air base near Kabul in Afghanistan. Photo: Reuters.
Obama, tell us the whole truth
February 22, 2009

‘Having considered the matter, the government adheres to its previously articulated position.” With these words, Acting Assistant Attorney General Michael Hertz ended a dream. The dream that Barack Obama’s presidency would inaugurate a transcendent world order on a new moral plane.

Late on Friday Mr Hertz told the Washington district court that the Obama administration maintained President Bush’s view that prisoners held at Bagram air base in Afghanistan could not challenge their detention in US courts. For the cynics, this is “a previously articulated position you can believe in”.

This newspaper was not so naive as to imagine that President Obama would immediately conform to the most scrupulous interpretation of US and international law. We are pleased that he has ordered the closure within a year of Guantanamo Bay, halted military trials and restricted CIA interrogators to Army Field Manual techniques. But the refusal to grant legal rights to detainees at Bagram is disappointing.

The US Supreme Court ruling in 2004 that prisoners in Guantanamo had the right to take their cases to US courts ended the anomalous status of the prison camp in Cuba. President Bush’s attempt to create a legal limbo outside the American and international legal systems had failed. But he continued to try to deny legal rights to prisoners not just in Guantanamo but in Iraq and Bagram, too.

Mr Obama’s closure of Guantanamo therefore smacks more of fulfilling a symbolic pledge than following it through. The Bush administration’s legal case was transparently unconvincing. It argued that detainees were “enemy combatants” being held until hostilities ceased. If so, they should have been entitled to the protections of the Geneva Conventions on the rights of prisoners of war. Yet President Bush resisted even that, and now President Obama represents continuity with that policy.

Indeed, Elena Kagan, Mr Obama’s nominee for Solicitor General, said during her confirmation hearing that someone suspected of helping to finance al-Qa’ida should be subject to battlefield law – indefinite detention without trial – even if captured in the Philippines, say, rather than a battle zone.

Nor is this the first disappointment of Obama’s presidency. Earlier this month, a government lawyer stuck to the Bush line in a case brought by Binyam Mohamed, the British resident expected home from Guantanamo tomorrow – about whom Clive Stafford Smith writes today. Mohamed and others are suing a subsidiary of Boeing for arranging “extraordinary rendition” flights, by which they were taken secretly to other countries where they say they were tortured.

The Bush administration had argued that the case should be dismissed because discussing it in court could threaten national security and relations with other nations. When the case resumed after President Obama’s inauguration, the judge asked the Justice Department’s lawyer if “anything material” had happened to change that view. “No, your Honour,” came the reply. The position he continued to take, he said, had been “thoroughly vetted with the appropriate officials within the new administration”.

What is more, Leon Panetta, Mr Obama’s nominee as CIA director, charged with ending the use of torture techniques such as waterboarding by US agents, said that the agency is likely to continue to transfer detainees to third countries. It would rely on the same assurances of good treatment on which the Bush administration depended.

The Independent on Sunday supports the military action to defend the people of Afghanistan. We accept that there are some difficult practical issues, not least caused by the impossibility of fair legal proceedings against existing detainees on account of their past mistreatment. And we recognise that, since Mr Obama’s inauguration, the glass of justice is fuller than it was.

But the case for respecting human rights remains unanswerable. Brutality, torture and long detention without trial are all not just morally repugnant but counterproductive. That is an argument President Obama himself made when he was running for office. Yet he has said nothing about the disappointing retreats from those high principles made on his behalf by subordinates in the past three weeks.

Gregory Craig, the White House counsel, said last week that the new President intended to avoid “bumper sticker slogans” in deciding what to do with the counterterrorism policies he inherited. Human rights and the rule of law are not bumper sticker slogans. For the sake of the struggle against extremism, Mr Obama needs urgently to deploy his thoughtfulness and great eloquence in explaining just where he stands.

Less than a month after signing an executive order to close the Guantanamo Bay prison camp, President Barack Obama has quietly agreed to keep denying the right to trial to hundreds more terror suspects held at a makeshift camp in Afghanistan that human rights lawyers have dubbed “Obama’s Guantanamo”.

In a single-sentence answer filed with a Washington court, the administration dashed hopes that it would immediately rip up Bush-era policies that have kept more than 600 prisoners in legal limbo and in rudimentary conditions at the Bagram air base, north of Kabul.

Now, human rights groups say they are becoming increasingly concerned that the use of extra-judicial methods in Afghanistan could be extended rather than curtailed under the new US administration. The air base is about to undergo a $60m (£42m) expansion that will double its size, meaning it can house five times as many prisoners as remain at Guantanamo.

Apart from staff at the International Red Cross, human rights groups and journalists have been barred from Bagram, where former prisoners say they were tortured by being shackled to the ceiling of isolation cells and deprived of sleep.

The base became notorious when two Afghan inmates died after the use of such techniques in 2002, and although treatment and conditions have been improved since then, the Red Cross issued a formal complaint to the US government in 2007 about harsh treatment of some prisoners held in isolation for months.

While the majority of the estimated 600 prisoners are believed to be Afghan, an unknown number – perhaps several dozen – have been picked up from other countries.

One of the detainees who passed through the Afghan prison was Binyam Mohamed, the British resident who is expected to return to the UK this week after his release from Guantanamo Bay. Mr Mohamed’s lawyer, Clive Stafford Smith, head of a legal charity called Reprieve, called President Obama’s strategy “the Bagram bait and switch”, where the administration was trumpeting the closure of a camp housing 242 prisoners, while scaling up the Bagram base to house 1,100 more.

“Guantanamo Bay was a diversionary tactic in the ‘War on Terror’,” said the lawyer. “Totting up the prisoners around the world – held by the US in Iraq, Afghanistan, Djibouti, the prison ships and Diego Garcia, or held by US proxies in Jordan, Egypt and Morocco – the numbers dwarf Guantanamo. There are still perhaps as many as 18,000 people in legal black holes. Mr Obama should perhaps be offered more than a month to get the American house in order. However, this early sally from the administration underlines another message: it is far too early for human rights advocates to stand on the USS Abraham Lincoln and announce, ‘Mission Accomplished’.”

Four non-Afghan detainees at Bagram are fighting a legal case in Washington to be given the same access to the US court system that was granted to the inmates of Guantanamo Bay by a controversial Supreme Court decision last year. The Bush administration was fighting their claim.

Two days into his presidency, Mr Obama promised to shut Guantanamo within a year in an effort to restore America’s moral standing in the world and to prosecute the struggle against terrorism “in a manner that is consistent with our values and our ideals”. But on the same day, the judge in the Bagram case said that the order “indicated significant changes to the government’s approach to the detention, and review of detention, of individuals currently held at Guantanamo Bay” and that “a different approach could impact the court’s analysis of certain issues central to the resolution” of the Bagram cases as well. Judge John Bates asked the new administration if it wanted to “refine” its stance.

The response, filed by the Department of Justice late on Friday, came as a crushing blow to human rights campaigners. “Having considered the matter, the government adheres to its previously articulated position,” it said.

Tina Foster, executive director of the International Justice Network, the New York human rights organisation representing the detainees, warned last night that “by leaving Bagram open, the administration turns the closure of Guantanamo into essentially a hollow and symbolic gesture”.

She said: “Without reconsidering the underlying policy, which has led to the abuses at Abu Ghraib and the indefinite detention of hundreds of people all these years, then we are simply returning to the status quo. The exact same thing that had the world up in arms has been going on at Bagram since even before Guantanamo.

“People have been tortured to the point that they have died; it is a rallying cry for those who oppose the US actions in Afghanistan; it is not strategic for the US; and, more importantly, holding people indefinitely, regardless of who they are and regardless of the facts, is completely inconsistent with everything we stand for as a country.”

The Department of Justice would only say that the legal briefs in the Washington case “speak for themselves”. It says Bagram is a special case because, unlike Guantanamo, it is sited within a theatre of war.

Mr Obama has pushed out the wider questions about the US policy on detaining terror suspects and supporters of the Taliban in Afghanistan until the summer, ordering a review that will take six months to complete.

The administration is weighing the likely increase in prisoners from an expanded fight against the Taliban in Afghanistan and Pakistan, against the international perception that it is embedding extra-judicial detention into its policies for years to come.