Barack Obama Takes a Ride on the Pentagon Escalator 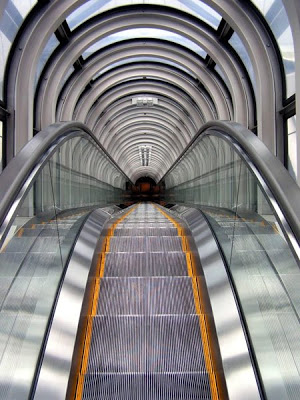 World’s Highest Escalator. Image from TechEBlog.
Will He be Able to Get Off?

President Obama has made a crucial mistake that could very well come back to haunt him, like the initial decision to escalate in Vietnam, made in 1965 against his better judgement, came back to haunt Lyndon Johnson.

MARMARIS, Turkey — Perhaps the greatest weakness in any foreign policy is the temptation to shape it according to the dictates of domestic politics. This seduction corrupts the synthesis of a sensible grand strategy as well as the formulation of sound military strategies. Although the temptation afflicts all nations, recent history has shown the United States to be dangerously prone to seeing and acting on the world through the disorienting lens of domestic politics. One need only recall Bush’s asinine grand-strategic assessment that the terrorists hate us, because they hate our way of life, to realize how dangerously misleading this kind of self referencing can become.

Bush’s inward focus was no anomaly, however. One of JFK’s most successful campaign tactics in presidential campaign of 1960, for example, was his phoney allegation of a missile gap between the Soviet Union and the United States, when in fact he knew the opposite was the case. JFK’s reckless campaign rhetoric unnecessarily intensified the cold war and reinforced militarists in both political parties. No doubt, his “bear any burden” rhetoric encouraged an atmosphere that helped to pave the way to Vietnam.

Ronald Reagon played the same game in 1980, with the same effects, using a phoney assertion of a “window of vulnerability,” together with equally spurious claim that the so-called hollow military of the Carter years was the product of budget cuts made by Democrats, when in fact the hollow military was a self-inflicted wound created by a perverse pattern of decision making within the Pentagon. The success of Reagan’s gambit intensified the Cold War in the early 1980s and launched an unprecedented “peacetime” spending spree that not only did not fix the Pentagon’s decision making pathologies, but put the US defense budget on a budget escalator that now can only be justified by continuing wars after the USSR had collapsed, much as George Kennan had predicted it would (i.e., due more to its internal contradictions than Reagan’s spending spree). That the continuing addiction to cold-war level defense budgets needs continuing war to justify the high spending levels can be seen clearly in the obsessive predilection toward bullying coercive diplomacy punctuated by the use of military force, especially bombing, exhibited by President Clinton and especially President George W. Bush.

Fast forward to 2008. During the last election, Candidate Barack Obama chose to attack President Bush’s catastrophically flawed grand strategy of belligerent warmongering (you are either with us or against us) by portraying Iraq, correctly in my opinion, as an unnecessary war that distracted attention away from Al Qaeda. But to shore up support from the “pro-military” parts of the democratic and independent electorates, Obama contrasted Iraq, the bad war, to Afghanistan, the good war. To that end, he pledged to draw down troops in Iraq and increase troops in Afghanistan, implicitly buying into Bush’s grand strategy of an open-ended, militarized, global war on terror — where al Qaeda remains forgotten but with the anti-Taliban war mutates into a far more dangerous anti-Pashtun war. Pointedly, Candidate Obama never called for reductions in the defense budget.

Specifically, Obama’s promise to focus on the “good war” is undermining his formulation of a sensible grand stategy as well as a sound military strategy, particularly with regard to the question of escalating our war in Afghanistan and intervening in Pakistan, which is clearly destabilizing Pakistan, the world’s only Muslim nation with atomic weapons.

To wit — Obama just approved an increase of 17,000 troops for Afghanistan, which is in line with his campaign promise, but far less than the 30,000 increase requested by the military. According to an unnamed source interviewed by Gareth Porter, the reason he reduced the military’s request is because the commander in Afghanistan, General McKiernan, could not tell Obama how the increased force would be used, and the Joint Chiefs of Staff could not tell him what the end-game in Afghanistan would be. In other words, the leaders of the military told Obama they have no strategy in Afghanistan, except doing more of the same, which everyone agrees is not working, and therefore, echoing the peculiar logic found in the Pentagon Papers, the military wants to redeem failure by escalating.

Rather than just saying no and telling the military to go back to the drawing board, Obama chose to make good on his campaign pledge by approving a smaller increase than requested (domestic politics), perhaps thinking he could keep his options open by buying himself a little time while he did a strategy study. However, in so doing, he bought into an admittedly strategy-free escalation decision (foreign policy), without understanding the future consequences of that decision. Straddling the fence may make sense in the context of day-to-day domestic politics, but Mr. Obama needs to understand Pentagon plays long-term bureaucratic politics, and over in Versailles on the Potomac, the stakes are high, because careers, budgets, and contracts are at stake.

Porter is right, President Obama has made a crucial mistake that could very well come back to haunt him, like the initial decision to escalate in Vietnam, made in 1965 against his better judgement, came back to haunt Lyndon Johnson. That is because, with his approval of a partial escalation in Afghanistan, Mr. Obama is now a vested party in General McKiernan’s strategy of mindlessness escalation. And Obama knows it is not good domestic politics to unring the bell. So, Mr. Obama will be under tremendous pressure and temptation to construct a strategy ex-post facto to justify his decision. Moreover, given his approval of an initial escalation, the priniciple of escalation is now an agreed-to option and he will soon learn that his credibility is at stake. You can be sure the milcrats understand this, because Front Loading decisions (i.e., getting politicos to commit to things before they understand the future consequences of their approval) has been raised a high art form in Versailles on the Potomac. It is now virtually certain the milcrats will try to use Obama’s initial escalation decision as the thin edge of the wedge to lever in a “new strategy” that will include sending even more troops into the Afghan/Paki meatgrinder.

So, is Obama repeating the mistakes of the Americans in Vietnam or the Russians in Afghanistan? General McKiernan apparently doesn’t think so, because the arrogantly dismissed analogies to the Russian experience in Afghanistan at a news conference on February 18 by saying, “There’s always an inclination to relate what we’re doing with previous nations … I think that’s a very unhealthy comparison.” Old timers, however, will remember, however, this is exactly how McKiernan’s predecessors blew off the warnings of Bernard Fall in the early 1960s, when they dismissed France’s experience in Indochina.

The sooner Obama realizes that studying and learning from past mistakes is a good idea, the easier it will be for him to jump off the Pentagon’s escalator, but he is just where the apparat wants him to be … alone. He has no George Ball in the Ms. Clinton’s State Department to act as the canary in the coal mine. And as for the dilletentes he appointed to sub-cabinet levels in Mr. Gate’s Pentagon, the milcrats know it will be far easier to roll over them that it was for their predecessors to successfully roll the best and the brightest in Mr. McNamara’s Pentagon.

[Franklin “Chuck” Spinney is a former military analyst for the Pentagon. He currently lives on a sailboat in the Mediterranean and can be reached at chuck_spinney@mac.com.]

This entry was posted in RagBlog and tagged Afghanistan, Obama Foreign Policy, Pentagon. Bookmark the permalink.