Because the Empire Is Never, Ever Wrong 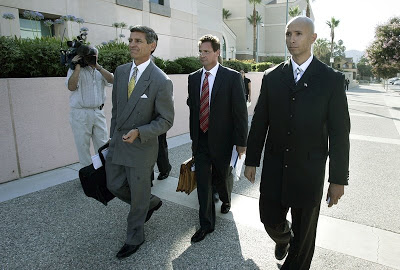 RIVERSIDE, Calif. — Jurors wept and embraced former Marine Jose Luis Nazario Jr. after acquitting him of voluntary manslaughter in the killings of unarmed Iraqi detainees during a fierce 2004 battle.

Tears rolled down Nazario’s cheeks and courtroom spectators openly sobbed and cheered Thursday. He is the first U.S. veteran tried by a civilian court for alleged actions in combat.

“It’s been a long, hard year for my family,” Nazario said outside the courtroom. “I need a moment to catch my breath and try to get my life back together.”

Jurors took less than six hours over two days to find the former sergeant not guilty of charges that he killed or caused others to kill four detainees in Fallujah, Iraq, on Nov. 9, 2004. The detainees were shot during a battle — marked by house-to-house fighting — that was considered one of the fiercest of the Iraq war.

Nazario had been charged with voluntary manslaughter, assault with a deadly weapon and discharging a firearm during a crime of violence. He could have faced more than 10 years in prison if found guilty.

Prosecutors had urged the jury to convict Nazario, saying he violated his duty as a Marine and must be held accountable for his actions in Fallujah.

Juror Ted Grinell said the panel acquitted Nazario because no witnesses testified to actually seeing the shootings and there was “not enough evidence to point that he was guilty.”

Jury forewoman Ingrid Wicken said the panel was not making a statement with its verdict, but added: “I think you don’t know what goes on in combat until you are in combat.”

Minutes after the verdict was read, jurors shook hands with and hugged Nazario and his sobbing mother, Sandra Montanez.

Read the rest of it here. / America On Line

1 Response to Because the Empire Is Never, Ever Wrong