Beckett on the Two-State Solution 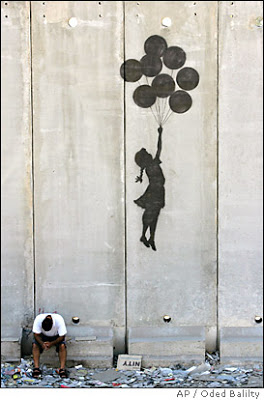 A Palestinian man sits next to a whimsical stenciling on Israel’s
separation barrier in the West Bank village of A-Ram.
Too Late for Two-State? The Battle for the Future of Palestine and Israel
By Paul Beckett / The Rag Blog / February 27, 2009

“Two states, side by side, living in peace.” What a beautiful vision! With these and similar excellent words the Obama administration undertakes another revival of the Israeli-Palestinian “Peace Process” (already revived as often as a Red Cross training dummy).

Why should we not believe in the vision? The way to such a genuine, final two-state solution of the Israeli-Palestinian conflict would seem to be wide open.

Twice, at two Arab League summits (Beirut, 2002, Riyadh 2007) the Arab nations have in unanimity offered Israel an immediate and permanent peace (including diplomatic recognition) on the basis of a two-state solution. With one exception (see below) it’s a very clean proposal: Israel gives up the territories it conquered in 1967, withdrawing behind the Green Line boundary, and a Palestinian state is created in the released area.

Worldwide acceptance would be immediate. The Green Line is already recognized as Israel’s border by all nations except Israel. The Green Line’s legality as a boundary has recently been confirmed by the World Court. The Arab proposal is essentially the solution called for by U.N. bodies any number of times, beginning with Resolution 242 in November 1967, which laid down that most important principle of post-World War II international law: “the inadmissibility of the acquisition of territory by war.”

Historians meanwhile would appreciate that a Palestinian state would, in fact, complete the original promise of the U.N.’s 1947 partition of British Palestine, when provision was made for an Arab state as well as a Jewish one within the mandatory territory.

But: would the Palestinians of the West Bank and Gaza be willing to accept such a settlement (complete Israeli withdrawal accompanied by Palestinian statehood) and make permanent peace?

Recent polls (as well as not so recent ones) suggest they would, in large majorities. Even the “hard-line” Hamas leadership has given hint after hint of being prepared to live with Israel in peace provided Palestinians have the normal rights of statehood, and providing Israel is on the other side of the Green Line.

Would there be advantages to Israel from such a solution? Certainly. Besides the benefits of peace itself, a true resolution of the conflict could enable Israel to take up a natural role of economic engine within the Middle East, a region of huge and heretofore underdeveloped potential.

Now, above I mentioned an exception: a kind of blemish on the “cleanness” and simplicity of the Arab League offer.

This concerns the Palestinian refugees. The Arab League peace offer requires a “just solution” to this problem. Right-to-return for some 5 million Palestinian refugees and their descendants? Well (it must be admitted) this part of two-state is not simple. But the insider consensus is that it can and will be “finessed” with only token returns by the refugees of 1948 and 1967 to Israel. There will be far more resettlement in other countries, and a whole lot of side payments. Messy certainly. And ugly. It’s made the worse by the fact that Israel maintains the most generous right-of-return – for Jews only – of any nation.

But insiders know ugly things do happen. Finessing ugliness is in their job descriptions. The messy and difficult refugee question will be handled, if the other things are.

All of the above makes a two-state solution sound feasible – a historic opportunity that should be seized.

So why are there a whole bunch of intellectuals – Palestinian, Israeli, and other – spitting in the optimism, and telling us a two-state solution has become impossible? What arguments do they make?

The arguments also are simple: Israel won’t do it. And Israel can’t do it.

What exactly won’t and can’t the Israeli government do?

They won’t allow a Palestinian state. And they won’t withdraw behind the Green Line. Either of these assertions, if true, kills the two-state idea. But let’s look at both.

Take state, first. What is a state? A state (like Israel, to take one example) has sovereignty over a geographic territory. It both serves and has authority over its citizens, and represents them to other states and other peoples. It has (or would like to, anyway) a monopoly on the legitimate use of force within the territory through its armed forces, and it has the duty to defend its territory and people against attack by other states or peoples. It has authority over its international borders (land and sea), its air space, and its resources of land and minerals.

Using this simple and quite uncontroversial definition, is Israel willing – and politically able – to agree to a Palestinian state?

Israel’s position can be teased out from the voluminous but deliberately murky record of “offers” (really, “offers” implied, suggested, posited, intuited, because they have never been forthrightly issued and set down) made to the Palestinian negotiators during the so-called Peace Process.

The phrase Palestinian “state” has been used by the U.S. and – seemingly grudgingly – by Israel, especially since the 2002 Road Map stage.

But the details that can be teased out are the following:

The Palestinian entity (let’s not misuse the term “state”) would not have an army to defend its territory against attack (guess who might chose to attack). Israel would retain “security responsibilities” for many roads and areas within the Palestinian entity. The major settlement blocs would be annexed to Israel, and they, together with security roads and other areas under continuing Israeli control would divide the already tiny area into several canton-like enclaves.

This would not be a Palestinian state. Israeli sovereign control over all the territory – from the Jordan River to the sea – would have a new disguise, but would be unchanged in essence.

Let’s look now at the second simple requirement for a two-state solution: Israeli withdrawal behind the Green Line.

This has become a political impossibility. Israel has closed this door on itself – and put padlocks on it – and thrown away the keys. Israel has built the separation barrier (some 80% of it on the Palestinian side of the Green Line. Israel has made itself dependent on West Bank water resources, and has created the ideological and cultural climate of ethnic fear that entrenches Jewish support for “separation” (for which “Apartheid” really is an exact translation).

Above all, Israel under every government since 1967 has created settlements on the occupied soil of East Jerusalem and the West Bank that now have around 400,000 Jewish residents. Many of these are now second- and third-generation. Israeli leaders of the enterprise have, with a kind of sly humor, referred to the settlements project as creating “facts on the ground.” Many of them, speaking candidly, have acknowledged (with satisfaction) that they are ensuring that the West Bank lands captured in 1967 can never be returned to the Palestinians. A senior Israeli political advisor is reported to have joked that even the scattered West Bank settlements would be withdrawn “when the Palestinians turn into Finns.”

There is every reason to think that the settlers and their political supporters are completely right in thinking that the settlements are there virtually forever.

Israel’s weak system of democratic government (which excludes the Palestinian fifth of its population from political influence) is heavily militarized and gives disproportionate representation to the political right. The Jewish settlers living in occupied territory (West Bank and East Jerusalem) constitute less than 10% of Israel’s total Jewish population. But, especially since the withdrawal of the settlements from Gaza, the settlers, led by their youth generation, have become an almost independent force in Israeli politics. They shrewdly evoke resonance with the generation of pioneer Jewish settlers before Israeli independence. Meanwhile, in recent decades they have made themselves over-represented in the ranks of Israel’s armed forces, especially the combat divisions.

The settlers’ credo is to “grab more hills,” not give them up. The settler community and their Israel-proper supporters mounted a convincing show of political force as they histrionically opposed the Gaza evacuation. Anyone who previously gave credence to the possibility of an Israeli withdrawal from the occupied territories of the West Bank and East Jerusalem (per the Arab states’ offer, for instance) must have come to understand what a complete political impossibility such a withdrawal represents.

Where does this leave us?

With the conclusion that the nays have it: it is too late to have “two states, side by side, living in peace.” If this simple, clear solution ever glimmered as a real possibility, it was in the years immediately following the 1967 seizure, or (briefer and weaker) at the time of Oslo. No Israeli government of the present or foreseeable future would (or could) agree to a genuine Palestinian statehood. Nor could any reverse the four decades of colonization in the occupied Palestinian territories.

What are the alternatives? There are two. One is an indefinite continuation of Israeli occupation (probably with minor withdrawals and deeper disguises). The other is a single state, from the Jordan River to the sea, giving citizenship and equal rights to all within it. Each of these alternatives will be explored in subsequent articles. A great struggle for the future of Palestine, and for the soul of Israel, is ahead.

[Paul Beckett lives near a small lake in the university town of Madison, Wisconsin. In the past he lived in Nigeria and he co-authored books and wrote articles on Nigerian and African politics. Now he is active in a number of progressive causes and organizations including The Madison Institute, the Progressive Roundtable, and the Madison-Rafah Sister City Project. He is films librarian for the latter. Much of his reading and writing now focuses on the Israel-Palestine situation. He is on the lazy side with all too many recreational interests, but might manage to do a book on Israel-Palestine next year. He can be reached at snkbeckett@yahoo.com.]

4 Responses to Beckett on the Two-State Solution