Being Realistic Eventually Turns Out To Be Right 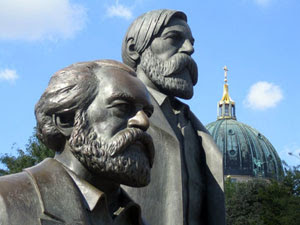 Karl Marx, were he still about, would surely be interested in the report that unregulated free-market capitalism has died in a flash, by its own hand; whereas it took 70 years and a Cold War to bring down the Marxist economy established in the Soviet Union following the Bolshevik Revolution.

The Marxist economy died of its internal contradictions.

This was the fate Marxism (or Marxism-Leninism) had predicted for capitalism, not for itself. Unregulated free-market capitalism may be said to have killed itself by greed, vanity and excess, all amply evident before and at the death scene, but the ultimate guilt must be attributed to the vacuity and perversity of market ideology, which contradicts human nature.

In this, it exactly resembles the American national foreign affairs ideology, that democracy will always eventually triumph over all else. Regrettably, this is an illusion, clung to in American governmental, political and, to a considerable degree, academic circles. It is stubbornly adhered to because everyone would like to think it true, since it is very reassuring to Americans, and an uplifting idea.

Both market and democratic ideologies rest on a belief in the essential goodness of mankind, admittedly blocked from time to time by institutional or intellectual obstructions, which have only to be removed for harmony to be restored.

Market capitalism rests on the observation that, all things being equal, a free market is the most perfect known mechanism for setting priorities in an economic system manufacturing goods or providing services.

It declares that in free-market conditions, everyone will make, sell and buy within an equilibrium established by the coincidence of their true interests. People will buy what they need or want according to the value they place on the good or service, and manufacturers or service providers will meet these needs according to whether the value offered incites them to do so, rather than to do something else.

It also is assumed that the employer will pay the true value of the employee’s work, since otherwise the worker will go to an employer who will do so, who naturally will understand that paying a higher wage is in his competitive interest vis-à-vis his competitor.

Owners and managers will be rewarded according to the true value of what each contributes to the common interest. Otherwise they will lose business and fail.

Those last two clauses demonstrate how artificial this theory is. That artificiality—that remoteness from how the real world functions—is why the market has to be regulated, a lesson last learned in the United States 80 years ago in the Great Depression, and progressively disregarded or discarded during the Reagan, Clinton and George W. Bush administrations.

What is this perfect and all-wise free market composed of?

Legitimate actors with legitimate goals, plus speculators, swindlers, confidence men, guys trafficking in inside information, and criminal actors. Yes, the defenders of the market say, but it all averages out in the end. So we see, as the market today destroys global credit and global value. Everyone currently acts as if all this happens as the result of an act of God or the will of the law of averages, or is the result of forgivable miscalculations. President George W. Bush said it’s all been very simple. They built too many houses.

Of course “they” didn’t build too many houses. “They” swindled too many people who bought those houses, or wanted to buy them, by giving them the money to buy them, or to refinance them in order to have a cash gain, with mortgages or second mortgages that these people could not responsibly be expected to repay. That is where it started.

The subsequent manipulation of the funds, so as to bundle bad debt with good debt and pass it off on the international financial market as “securitized” good debt, has had more than enough discussion since the crisis blew up this summer.

The financiers, as Joseph Stiglitz has observed (in a recent CNN interview), were doing what the system demanded of them. They were assured generous rewards for managing risk and allocating capital so as to improve the efficiency of the economy enough to justify their generous compensation. “But they misallocated capital; they mismanaged risk—they created risk. They did what their incentive structures were designed to do: focusing on short-term profits and encouraging excessive risk-taking.”

And this does not take account of an Iraq war financed by debt, and the unconscionable Bush tax cuts to the wealthy, the president’s perverse punishment of the very working- and middle-class voters who had elected him.

As Stiglitz says, the first measures in recovering from the disaster must be to reconstruct the system of corporate incentives to serve the public interest rather than private interests.

Prior to that, however, public policy must be reconstructed on the basis of a historical understanding of how people actually behave rather than on theories about how they might be presumed to behave in the world of abstractions.

This understanding is called realism, and in American public affairs during the past two decades it has been scorned. However, one good thing about realism is that being realistic eventually turns out to be right. The distinguished Protestant theologian and political philosopher Reinhold Niebuhr once remarked that of all the doctrines of the Christian religion, only one is invariably self-validating: the doctrine of Original Sin.

This entry was posted in RagBlog and tagged Capitalism, Economic Collapse, Economy. Bookmark the permalink.