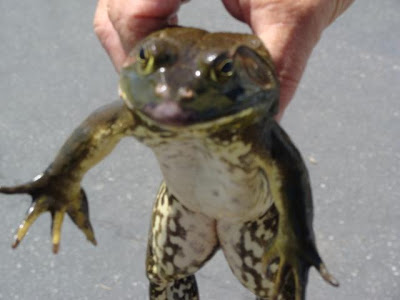 Amphibians are dying even in remote Sierra Nevada.
Scientists: Humans To Blame

‘Behind all this lies the heavy hand of Homo sapiens’
By John Boitnott / August 12, 2008

“There’s no question that we are in a mass extinction spasm right now,” said David Wake, professor of integrative biology at UC Berkeley. “Amphibians have been around for about 250 million years. They made it through when the dinosaurs didn’t. The fact that they’re cutting out now should be a lesson for us.”

New species arise and old species die off all the time, but sometimes the extinction numbers far outweigh the emergence of new species, scientists said.

Extreme cases of this are called mass extinction events. There have been only five in our planet’s history, until now, scientists said.

“There’s no question that we are in a mass extinction spasm right now.”

The sixth mass extinction event, which Wake and others argue is happening currently, is different from the past events.

“My feeling is that behind all this lies the heavy hand of Homo sapiens,” Wake said.

The study was co-authored by Wake and Vance Vredenburg, research associate at the Museum of Vertebrate Zoology at UC Berkeley and assistant professor of biology at San Francisco State University.

There is no consensus among the scientific community about when the current mass extinction started, Wake said.

It may have been 10,000 years ago, when humans first came from Asia to the Americas and hunted many of the large mammals to extinction.

It may have started after the Industrial Revolution, when the human population exploded. Or, we might be seeing the start of it right now, Wake said.

No matter what the start date, data show that extinction rates have dramatically increased over the last few decades, Wake said.

The global amphibian extinction is a particularly bleak example of this drastic decline, he said. In 2004, researchers found that nearly one-third of amphibian species are threatened, and many of the non-threatened species are on in decline.

The Bay Area’s back yard provides a striking example, Wake said. He and his colleagues study amphibians in the Sierra Nevada, and the picture is grim there, as well.

“We have these great national parks here that are about as close as you can get to absolute preserves, and there have been really startling drops in amphibian populations there, too,” Wake said.

Of the seven amphibian species that inhabit the peaks of the Sierra Nevada, five are threatened.

Wake and his colleagues observed that, for two of these species, the Sierra Nevada Yellow-legged Frog and the Southern Yellow-legged Frog, populations over the last few years declined by 95 to 98 percent, even in highly protected areas such as Yosemite National Park.

This means that each local frog population has dwindled to 2 to 5 percent of its former size.

Originally, frogs living atop the highest, most remote peaks seemed to thrive, but recently, they also declined.

There are several frog killers in the Sierra Nevada, Wake said.

The first hint of frog decline in this area came in the 1990s, and researchers originally thought that rainbow trout introduced to this area were the culprits – they like to snack on tadpoles and frog eggs.

The UC Berkeley team did experiments in which it physically removed trout from some areas, and the result was that frog populations started to recover.

“But then they disappeared again, and this time there were carcasses,” Wake said.

The culprit is a nasty pathogenic fungus that causes the disease chytridiomycosis.

Researchers discovered the fungus in Sierra Nevada frogs in 2001.

Scientists have documented over the last five years mass die-offs and population collapses due to the fungus in the mountain range.

But the fungus is not unique to California. It has been wiping out amphibians around the world, including in the tropics, where amphibian biodiversity is particularly high, Wake said.

“It’s been called the most devastating wildlife disease ever recorded,” Wake said.

Global warming and habitat constriction are two other major killers of frogs around the world, Wake said. The Sierra Nevada amphibians are also susceptible to poisonous winds carrying pesticides from Central Valley croplands.

“The frogs have really been hit by a one-two punch,” Wake said, “Although it’s more like a one-two-three-four punch.”

The frogs are not the only victims in this mass extinction, Wake said.

“Our work needs to be seen in the context of all this other work, and the news is very, very grim,” Wake said.

The National Science Foundation and National Institutes of Health helped support the study.