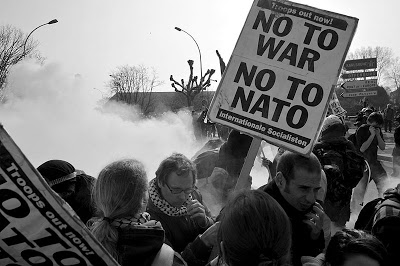 Organizers and supporters will use humor and music, art and play, civil disobedience and imagination to voice their rejection of permanent imperial wars and the many forms of violence that arise from the same paradigm.

The leaders of the North Atlantic Treaty Organization (NATO), the gently named but dangerous behemoth dominated by the United States — and history’s largest global military cohort — plan to meet in Chicago on May 20 and 21.

The tiny fraternity of concentrated wealth and power that calls itself the Group of Eight (G8) was to have met in Chicago in mid-May as well, overlapping with NATO. Fearing massive protests, the G8 cancelled, retreating to Camp David, Maryland, chased out of town by a coalition of dissidents, activists and agitators.

Isolated and inaccessible, Camp David is where the “leaders” of the planet’s eight wealthiest countries belong — sequestered and remote, barricaded and cut off in every imaginable way. The Camp David move illuminates the elite’s isolation from the people they pretend to represent.

By the same token, NATO — a military alliance of 28 countries — is the only major intergovernmental body without a basic information disclosure policy. It’s a closed cabal with an active PR front and zero engagement with the public it claims to protect.

From their separate berths, NATO and the G-8’s heads of state, intelligence personnel, foreign ministers and generals, cabinet members and secret operatives, advisors and bureaucrats — the 1 percent of the 1 percent — will conspire to extend and defend their obscene wealth, to exploit the remaining fossil fuels, natural resources, human labor, and the living planet to the last drop, and to dominate the people of the global majority.

A People’s Primer on NATO

On NATO’s official web site, a white dove flutters across an elegant page, but soon enough, it moves to images of helicopters and fighter planes menacing the world under the facade of peace.

“NATO forces” are referenced constantly, and yet the reality of NATO is obscure and enigmatic.

U.S. military spending alone accounts for nearly half of the world’s military spending; add NATO countries, and the figure jumps to three quarters.Under cover of NATO, 9,000 British troops were deployed to fight a U.S. war in Afghanistan, offering a fig leaf presented as “coalition forces” to U.S. military aggression.

Purportedly set up as a defensive organization, in 1999 NATO’s mission statement was rewritten to allow for offensive action across the Eurasian landmass. Since 1999, NATO has waged war in four countries on three continents, none of which are near the North Atlantic region: in Southeast Europe’s Yugoslavia, North Africa’s Libya, and Central and South Asia’s Afghanistan and Iraq.

NATO retains hundreds of nuclear weapons in military facilities across Europe, an end-run around the nuclear Non-Proliferation Treaty (NPT), which forbids the transfer of nuclear weapons to non-nuclear countries. England is required by the NPT to work toward nuclear disarmament; instead, its nuclear weapons system has been hidden under NATO since the 1960s, a set-up that means its nuclear weapons could be used against any country attacking, or threatening to attack, any of NATO’s member states.

Between 150 and 240 U.S. nuclear weapons are sited in five European countries. These are B61 gravity bombs — tactical nuclear weapons — which are more flexible and easier to use in a battlefield and have a variable explosive power exceeding, at their upper limits, the power of the Hiroshima atomic bomb by more than a factor of 10.

NATO’s preemptive “first strike” doctrine is a menacing presence across the planet; its Active Layered Theatre Ballistic Missile Defense (ALTBMD) is the latest successor to Reagan’s Star Wars plan. Russia recently signed on and will be on the U.S. side of the space shield, erected against some other states — perhaps Iran, perhaps China — promoted to the status of “enemy.” 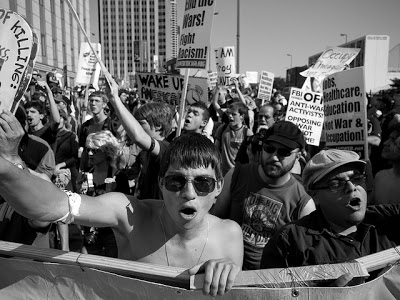 A 1984-style national security dragnet is set to descend on Chicago in an attempt to lock the city down during the NATO summit. Mayor Rahm Emanuel has made it clear that he will happily act as the host of NATO — and that the 99 percent are not welcome. Emanuel is concocting a culture of fear, suggesting that it is the growing human resistance to NATO that represents danger, outside agitators, violence, and invasion.

Universities and schools are being urged to close early in May; communities of color are told that NATO’s work is not their concern; merchants are preparing for assault from the dissenting masses. But NATO, and their G8 friends in hiding, are the real masters of war; it is they who are the greatest purveyors of violence on this earth.

It is unsurprising, then, that Emanuel has funding to further arm and mobilize the police and militarize the city. The Mayor has announced plans to contain and suppress demonstrators. He has pushed through legislation that restricts and criminalizes free speech and assembly and requires costly insurance for public demonstrations. He is issuing a steady stream of pronouncements about a fabricated Chicago, which he says is under siege from ominous and dangerous outside forces.

The mayor, not the popular resistance, is creating conditions — once again — for a police riot in Chicago against people exercising their right to peaceful dissent. Emanuel can still change course, and he should; so far, he has chosen to frame the coming convergence of protesters and the powerful solely in military and security terms.

Join the Coalition/Come to Chicago

Chicago is big enough for all — it is after all a nuclear-free and cease-fire city, cradle of the Haymarket martyrs and the eight-hour day, labor and peace actions, vast civil rights and immigration rights manifestations, home of Ida B. Wells Barnett, Jane Addams, Richard Wright, Gwendolyn Brooks, and Studs Terkel.

Chicago is a vast public space with historic parks, monuments, neighborhoods and streets for popular mobilzations — Chicago belongs to all of us. We underline the right — the moral duty — to dissent and demonstrate, to resist and to be heard, to participatory (not billionaire paid-for) democracy.

The festival of NATO counter-summits, protests, and family-friendly permitted marches planned for May are the next chapter. Organizers and supporters will use humor and music, art and play, civil disobedience and imagination to voice their rejection of permanent imperial wars and the many forms of violence that arise from the same paradigm: discrimination and hate based on race, gender, and ethnicity; epic income disparity; mass incarceration; inadequate resources for education, health care, and opportunities for meaningful work.

Music, dance, teach-ins, and peoples’ tribunals will overflow the parks and theatres. The protests are in the spirit of the Arab Spring, Occupy, and the Madison labor struggle, drawing equal inspiration from the work of many others: the Pelican Bay hunger strikers, teachers and nurses, the undocumented DREAMers, returning veterans against the wars, women insisting on reproductive dignity, people resisting foreclosures/take-back-the-landers,, those working for LGBTQ equality and more.

People from everywhere will bring their spirits and their creativity, pitch their tents and stake their claims. Join us!

[William Ayers is Distinguished Professor of Education and Senior University Scholar at the University of Illinois at Chicago. Bernardine Dohrn is Clinical Associate Professor of Law and Director and founder of the Children and Family Justice Center at Northwestern University. Both Ayers and Dohrn were leaders in SDS and the New Left, and were founders of Weatherman and the Weather Underground. This article was published at Truthout and was posted to The Rag Blog by its authors. Find more articles by and about Bill Ayers and Bernardine Dohrn on The Rag Blog.]