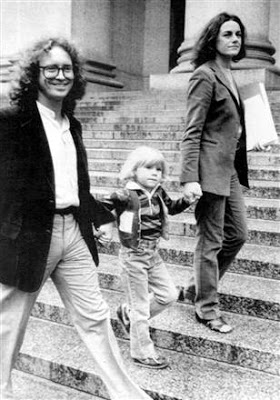 Bernardine Dohrn, with Bill Ayers and five-year-old Zayd, on the steps of the federal courthouse in New York City, 1982. Photo by David Handschuh / AP.
The curious, mysterious, obsolete,
and dangerous federal grand jury

The federal grand jury is a secret, coercive fishing expedition, a rubber stamp and tool solely of the prosecutor.

I was subpoenaed to a federal grand jury in May of 1982 in New York City. It has left me as something of a specialist in an arcane, secretive, and obsolete area of the law — one that has just reappeared with FBI raids, seizures of private papers, computers, and subpoenas to compel testimony in Chicago, Minneapolis, and other cities across the country.

At the time of my subpoena, our sons were just five, two, and one. My five year old accompanied me to federal court that day and waved goodbye when the judge rejected my arguments, declared me in civil contempt, and sent me directly to federal jail. My sons visited weekly, brought separately by steady friends.

With the oldest, he sat on my lap while we did crossword puzzles, made calendars, and read books, and then he hugged goodbye after each visit, went outside and stood on the street corner downstairs signaling until I flashed the lights from my cell.

My middle child came into the visiting room, jumped up and cuddled in my arms, and directly went to sleep during his weekly visits, while I breathed in the sweetness of his breath, his hair, his skin. I tried to send him homemade, hopeful weekly cards.

The youngest was struggling to make nonverbal sense of his losses. I tried not to ask him for anything, but to play toddler games and to be fully present to him as much as I could in those cold circumstances.

My decision not to provide samples of my handwriting to the grand jury — even though the FBI and federal government admittedly had possession of boxes of my handwriting — was the most difficult decision of my life. I spent more than seven months in the federal correctional facility, not charged with any crime, allegedly not being punished (according to the judge), but rather being compelled to testify, and not knowing when, if ever, I would be released or if I might even be indicted.

When the same judge who had held me in contempt released me, he instructed the federal prosecutor to utilize the handwritten letters I was repeatedly submitting to him about dangerous jail conditions. He ruled that I was exceedingly stubborn, and that further incarceration would not change my recalcitrant mind and therefore holding me any longer had moved from coercion to punishment.

The federal grand jury is a secret, coercive fishing expedition, a rubber stamp and tool solely of the prosecutor. Although it was once (at the time of the Magna Carta) a check on the singular and arbitrary power of the king, it has become its opposite: a greatly enhanced power of the executive.

It has been abolished in England, virtually everywhere else in the world, and in more than half of the states in the U.S. It embodies fundamental violations of basic rights, and it is not necessary to the investigation and prosecution of crime.

The grand jury is mentioned in the Constitution’s Fifth Amendment: “No person shall be held to answer for a capital or otherwise infamous crime, unless on a presentment or indictment of a Grand Jury.”

Inside the grand jury room, there is no judge. The person compelled to appear cannot testify with her or his lawyer present, and cannot have a transcript of the proceedings. The grand jurors are sworn to secrecy. The prosecutor — alone — decides who and what to subpoena (testimony, records, computers, letters, photos), what possible crimes to investigate, who will testify, who gets immunity, and what charges to bring. It is famously said that any competent prosecutor can “get a grand jury to indict a ham sandwich.”

Here are 10 key and surprising elements of the federal grand jury:

It is no wonder that former judges and prosecutors, as well as legal scholars and organizations, call for reforms or abolition of the federal grand jury system.

Some will recall that during the Clinton administration, Monica Lewinsky’s mother was subpoenaed to a federal grand jury and compelled to testify about her daughter’s sexual relationships.

Some remember the wave of resistance to federal grand juries during the Nixon administration under Attorney General John Mitchell, against the antiwar movement, anti-racist solidarity activists, and the organizing work of Vietnam veterans who returned to tell the truth. A smaller number recall its use during the McCarthy era witch hunts of the 1950s. Recently, the environmental movement has been targeted by grand juries.

Today’s raids and subpoenas allegedly concern investigations into the sweeping and vague prohibitions of “material aid” to entities that the U.S. has deemed terrorist organizations. This federal legislation has been interpreted so broadly by the courts as to amount to a ban on peaceful opposition to U.S. wars, occupations, aerial bombings, and support for state terror.

Popular education about the realities and curiosities of federal grand juries is, again, urgently on the agenda.

[Bernardine Dohrn is Clinical Associate Professor of Law and Director and founder of the Children and Family Justice Center at Northwestern University. She and her husband Bill Ayers were leaders in SDS and the New Left, and were founders of Weatherman and the Weather Underground.]