Bernie Madoff : Ponzi Man and the Nonsense of Self-Regulation 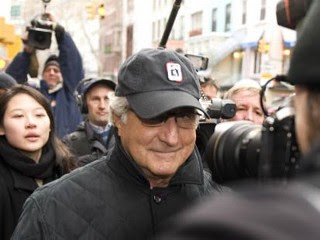 Surrounded by members of the media, Bernard Madoff — the man who has taken the Ponzi scheme to new heights — walks down Lexington Ave to his New York City apartment on Dec. 17, 2008. Photo by Don Emmert / AFP / Getty Images.
‘Now comes Madoff. Same self-regulation song, this time taking down charities, synagogues, and sometimes it looks like half the retired people in Florida.’
By Steve Russell / The Rag Blog / December 21, 2008

Mark Sunshine posted the following article on Seeking Alpha, a website for investors with no political leanings I can discern. Lots of folks post there with differing views and the readers get to pick what will help them play the markets.

Texans will remember when Governor Bush turned Clean Air Act enforcement in Texas over to self-regulation and we wound up with “ozone days” where we never had them before.

Those who follow politics will see the perverted genius of Richard Nixon, who had the mandate to destroy the Great Society programs but often could not get the votes. His solution, copied by every Republican President since, was to appoint people to the bureaucracy who did not believe it the bureaucratic mission.

I was in Wisconsin when Nixon was elected and a local Repug named Jerris Leonard ran a tough campaign against the liberal Dem Gaylord Nelson. That race gave me many political stories, but this one has a sad ending. One of the controversies that arose in the race was Leonard’s membership in a “white’s only” club.

After Leonard lost the Senate race, President Nixon gave him a plum appointment in the Justice Department: heading the Civil Rights Division!

Christopher Cox, Bush’s Chair of the SEC, has made the world safe for hedge funds in every way available to him. He allowed naked short-selling of stock never owned or borrowed by the seller, enabling hedge funds to drive down stock with bogus short sales and profit from real ones. He repealed the uptick rule, making it easier to drive down stock with a purposeful “bear raid.” These lapses, as much as any real financial weakness, led to the collapse of the big investment banks. Maybe they were doomed, but thanks to the SEC their stock died first.

Now comes Madoff. Same self-regulation song, this time taking down charities, synagogues, and sometimes it looks like half the retired people in Florida.

The international aspect of this debacle is that the exotic securites that are dragging down balance sheets in the European Union were sold on the basis that they were good enough to be publicly marketed in the United States. And everyone knows the U.S. has had the strongest securities regulations in the world ever since the New Deal, right?

Thank you once again, Mr. Bush. You brought us from the strongest securities regulation in the world to showing ourselves literally unable to protect widows and orphans from scam artists.

But you kept your word. You left the market to rule itself and you did not get caught copping blow jobs in the White House. History will judge the results; the voters already have.

As the SEC comes to grips with the Bernie Madoff scandal, I am reminded of a law school course that I took 25 years ago where I was taught that good regulation requires good regulators. Unfortunately, the SEC has turned into a bad regulator and has lost the respect of the public it is supposed to protect.

The SEC leadership doesn’t understand or acknowledge why the SEC exists or what its role is supposed to be. Missionless and confused, the SEC is currently a lost agency that needs to be refocused and remotivated.

The SEC used to know its mission. On the SEC web-site, it still articulate why it exists when it states that “First and foremost, the SEC is a law enforcement agency.” (bold, italic and underline for emphasis). That means, first and foremost Chris Cox is the “Chief of the SEC Enforcement Police.” Unfortunately, Mr. Cox appears never to have embraced or understood his enforcement responsibilities or the SEC’s role to protect the public.

Instead, the SEC indirectly encouraged scamsters and fraud artists through lax enforcement standards. Crime prevention is the most important role of any law enforcement agency and prevention takes place because potential criminals know that they will be caught and prosecuted by a tough but fair cop.

Instead of being a cop, Chris Cox had a nonsensical theory of law enforcement that primarily relied upon self regulation and enforcement. The invisible hand of capitalism was supposed to ferret out frauds and act as the main barrier to illegal and dishonest behavior. However, real criminals don’t self regulate and enforcement usually means economic intimidation and extortion.

In the Madoff scandal, the SEC’s performance as a law enforcement agency is beyond horrible. I was hoping that Cox’s statement that Madoff “lied” to the staff when he was asked if he stole from investors was a misprint or a bad joke. But it wasn’t. Of course Madoff lied to the staff. But then again, what law enforcement organization takes the word of the person that they are investigating?

I have watched enough Law and Order to know that very few people confess unless they have to, and then it is as a result of vigorous investigations and vigilant prosecutions. And I am pretty sure self regulation and market enforcement never entered into Bernie Madoff’s mind when he stole $50 billion. Madoff confessed because he ran out of money to keep on perpetuating his lies. Until the end, Madoff was trying to keep the Ponzi scheme going and was actively marketing for new investors by promising “special deals” for those that he could rip off.

Cox and his immediate subordinates are responsible for not investigating Madoff. Cox was in charge and clearly didn’t have an internal reporting system to keep track of open investigations, cases and clearance. After all, if he did he would have noticed a $50 billion fraud tip that had credibility and might have asked questions. Instead of taking responsibility for the scandal, Cox threw his staff under the bus and blamed them for the mess. He is an out of touch leader who showed little courage or backbone.

I think that most of the SEC staff are good hard working Americans who don’t like being humiliated in public. If they are like most people they also can’t wait to get rid of Cox and get a real leader.

Fortunately, the SEC won’t have Chris Cox much longer. President Elect Obama is nominating Mary Schapiro to be the new Chairman of the SEC. She is known to be a tough and effective regulator who understands the role of law enforcement. Ms. Schapiro has a big job ahead of her but her reputation suggests she is up to the challenge. Her staff will need strong leadership and rebuilding. Ms. Schapiro is going to be a fixer, leader and good regulator.

2 Responses to Bernie Madoff : Ponzi Man and the Nonsense of Self-Regulation