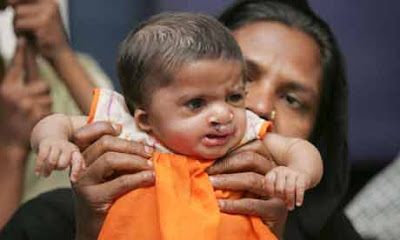 Bhopal — UNABLE TO steer safely in the mud, the driver of our rickshaw pulls into the side of the road to allow us to take shelter from torrential rain. There, under a shop’s awning, a small crowd of people are standing together waiting for the weather to break. They include Sapna Sharma and her brother-in-law, Sanjay. Sanjay is holding his 18-month-old nephew, Anshul, who has kohl-rimmed eyes and silver bracelets on his ankles. As we stand talking, some of the people start pointing to the child’s hands and feet while speaking animatedly to us in Hindi. Through our translator, Sapna then explains that her son was born with 12 toes and 12 fingers.

Shortly afterwards, about half a mile away in the Shankar Nagar area of Bhopal, we meet another Indian child with congenital defects, three-year-old, Raj, who is blind, cannot walk and whose head is oversized.

“The doctors said bad water could have been a cause of my son’s condition. Older people here are gas victims and now the younger people are victims of the water,” says his mother, Poona.
advertisement

Here, in the capital city of Madhya Pradesh in India, hundreds of children are being born with deformities and mental health problems. As we walk back to our rickshaw after the interview we come across more afflicted youngsters who have followed us along the road out of curiosity. They include Rajesh, 12, who is barefoot and bald. The other children make fun of him – his mother, Yashdabai, explains that they do so because they believe that her son is “mad”.

Rajesh’s older sister, Sonia, a pretty girl with her black hair pulled back off her face, scolds the other children and tells us that she always has to protect her brother from bullies. Sonia is barefoot, too, and as she speaks a colleague notices that the young girl has huge feet.

This is the horrendous legacy the city of Bhopal is facing 25 years on from one of the world’s worst industrial accident. The Bhopal gas disaster, as it became known, occurred shortly after midnight on December 3, 1984, when a cloud of poisonous gas escaped from a Union Carbide pesticide plant in the city. It has been dubbed the “Hiroshima of the chemical industry”. The accidental release of 42 tonnes of methyl isocyanate (MIC) from the factory exposed more than 500,000 people to toxic gases and up to 10,000 inhabitants are thought to have died within the first 72 hours after the leak.

At least 25,000 people exposed to the gas have since died, and today in Bhopal tens of thousands more Indians suffer from a variety of debilitating gas-related illnesses such as respiratory and psychiatric problems, joint pains, menstrual irregularities, tuberculosis and cancers. More disturbingly, the escalating number of birth defects in children include cleft palates, webbed feet and hands, twisted limbs, brain damage and heart problems.

Shankar Nagar is a slum area of the city just north of the derelict Union Carbide factory site. For years local campaigners have been demanding that Union Carbide – now owned by US multinational Dow Chemicals – clean up the abandoned pesticide plant, but so far their pleas have been ignored.

In 1999, a Greenpeace investigation found severe chemical contamination of the environment surrounding the former Union Carbide factory, including pollution with heavy metals and chemical compounds.

The Greenpeace report also said: “Analysis of water samples drawn from wells serving the local community has also confirmed the contamination of groundwater reserves with chemicals arising either from previous or ongoing activities and/or incidents.

“As a result of the ubiquitous presence of contaminants, the exposure of the communities surrounding the plants to complex mixtures of hazardous chemicals continues on a daily basis. Though less acute than the exposure which took place as a result of the 1984 MIC release, long-term chronic exposure to mixtures of toxic synthetic chemicals and heavy metals is also likely to have serious consequences for the health and survival of the local population.”

Amnesty International’s 2004 Clouds Of Injustice report said: “Toxic wastes continue to pollute the environment and water supply and it is appalling that no-one has been held account for the leak and its appalling consequences.”

The abandoned factory site is now a vast wasteland of weeds and trees that is home to packs of wild dogs. The buildings and structure have been left to rot while tank 610, from where the poison gas escaped, sits like an old rusting locomotive in the sun. Piles of dangerous chemicals are lying in the open air and inside one of the abandoned labs we saw dozens of dusty brown bottles containing chemicals. Campaigners say drums of Sevin – the pesticide Union Carbide was producing at the time using MIC – have never been removed from the site and remain locked in one of the sheds under police guard.

“There are sacks of poisons, mercury drops, toxic carbaryl rocks from which toxic tars ooze into the earth, and subsoil water and tarry liquids that overflow when the monsoon comes,” explained our translator and guide, Sanjay Sharma, 24, a student who lost his three sisters, two brothers and parents in the 1984 disaster. He has one sister left after his only other brother, Sunil, committed suicide on July 26, 2006. Sunil had been 12 at the time of the disaster and was a vociferous campaigner on behalf of victims until be became severely depressed.

“My brother hanged himself. When they found him he was wearing a T-shirt that said, No More Bhopalis’.”

Survivors campaigning for clean water petitioned the Supreme Court of India, which in May 2004 ordered that clean, safe water be piped into the communities, but to date the state government has ignored this order.

In January this year, a major study was embarked upon to try to ascertain the extent of the current health problems facing the population. The year-long investigation is being carried out by the Sambhavna Clinic in Bhopal, an innovative medical facility built in the centre of the city most badly affected by the gas leak. Researcher Santosh Kshatria said 22 different communities near the factory site were believed to be drinking from a contaminated water supply.

“There are 10 researchers. I’m covering 20,000 people in 17 neighbourhoods. So far I have surveyed 5000 people and found more than 200 cases of children with congenital defects. Many have twisted limbs and many have mental health issues. Anecdotally, this is a very high rate of incidence,” she says.

In many cases these are the same families from the poorest slum areas who were decimated by the gas in 1984. They have no option but to drink the water and complain of aches and pains, rashes, fevers, eruptions of boils, headaches, nausea, lack of appetite, dizziness and constant exhaustion.

Lead, mercury and organochlorines have been found in the milk of nursing mothers living near the factory with the result that women are terrified to breastfeed their babies in case they are giving them poison.

Another legacy for Bhopali females is that men have reservations about marrying so-called “gas victims” so many young local women face living in dire poverty having been stigmatised and left single.

Investigations into the 1984 disaster revealed that something had gone fundamentally wrong with a tank that stored methyl isocyanate. During the early hours of December 3, 1984, large amounts of water entered tank 610, containing the highly toxic chemical. The resulting reaction increased the temperature inside the tank to more than 200C, raising the pressure to a level it was not designed to withstand and eventually releasing a large volume of toxic gases.

Union Carbide has always claimed that its Indian subsidiary – Union Carbide India Limited, which was 49%-owned by the state – was solely responsible for the management of the plant and that the accident was the result of sabotage.

Union Carbide was taken over by Dow Chemicals, one of the producers of Agent Orange, in 2001, and the latter insists that all liabilities were settled in 1989 when Union Carbide paid around £300 million to the Indian government to be allocated to survivors. Furthermore, Union Carbide says it did all it could to alleviate the human suffering following the disaster and that it paid for a hospital in Bhopal to offer free medical care to victims.

The company also denies allegations that it abandoned the plant and says UCIL removed tens of thousands of pounds of MIC from the plant and spent around £1.5m undertaking additional clean-up work. The firm also says that a 1998 study of water sources near the plant site by the Madhya Pradesh Pollution Control Board did not find any traces of chemicals linked to any substance used at the UCIL plant.

In 1991, however, Bhopal’s authorities charged Union Carbide’s chief executive, Warren Andersen, with manslaughter. To date the retired American has avoided an international arrest warrant and a US court summons. Andersen was declared a fugitive from justice by the Chief Judicial Magistrate of Bhopal in 1992 for failing to appear at court. Although orders were passed to the Indian government to press for his extradition from America, Bhopal campaigners say ministers have not pushed the case, fearing a backlash from foreign investors.

A quarter of a century on the campaign for justice in Bhopal continues unabated. In June, 27 members of the US Congress appealed to Dow Chemicals to pay to clean up the derelict site and to meet survivors’ demands for medical and economic rehabilitation. The politicians also asked the company to send a representative to take part in court proceedings in India.

“Bhopal is widely regarded as the worst industrial disaster in human history, a catastrophe with widespread implications for the chemical industry, globalisation and human rights,” they said in a letter initiated by Frank Pallone, a Democrat from New Jersey.

They say the polluter, rather than taxpayers, should bear responsibility for environmental damage. Meanwhile, Bhopal’s environmental crisis continues.

This entry was posted in RagBlog and tagged Corporate Power, Crimes Against Humanity. Bookmark the permalink.