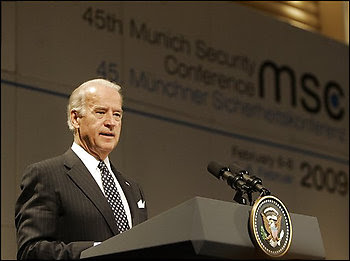 Biden was telling the waiting world that Washington would continue to pursue its own Eurasian sphere of influence, in part by expanding NATO ever closer to Russia.

‘Sovereign states have the right to make their own decisions and choose their own alliances,’ he declared, couching a nuclear threat in the cloak of freedom and democracy.

Joe Biden set “a new tone” in his foreign policy speech in Munich over the weekend, breaking with the Bush administration and showing, as our founder said, “a decent respect for the opinions of mankind.” But he also raised a banner that we will all come to regret.

His words carried a dangerously mixed message. Other than those eager for a new Cold War or neocon lobbyists paid by Georgian president Mikheil Saakashvili, few outsiders wanted to hear about the two breakaway provinces now under Russian tutelage. Nor should we wax nostalgic over spheres of influence, whether expressed in our own blood-splattered Monroe Doctrine or in the Russian idea of “the near-abroad,” where “friendship knows no frontiers.”

But Biden was telling the waiting world something far more significant – that Washington would continue to pursue its own Eurasian sphere of influence, in part by expanding NATO ever closer to Russia. “Sovereign states have the right to make their own decisions and choose their own alliances,” he declared, couching a nuclear threat in the cloak of freedom and democracy.

To realize what this could mean, think of the stark choice Washington and its allies would have faced last year if Georgia had been part of NATO when the hotheaded Saakashvili provoked the all-too-ready Russians into a shooting war. Would we have rushed to Georgia’s defense with military force as the NATO treaty would have committed us to do? Or would we have been obliged to tell the world that NATO protection was worthless?

Not a pretty prospect, and an incredibly backward-looking idea for a new American administration supposedly committed to change.

The dangers Biden was promoting in Munich go far beyond NATO membership. In the coded language of diplomacy, he signaled that Washington would do whatever it takes to hold sway over the energy resources of the Caucasus, the Caspian Sea, and the former Soviet Central Asia.

This was hardly new, but that’s just the point. The Obama administration may have a green and friendly tone, but it will still do business as usual when the business is oil, natural gas, uranium, and whatever else makes the world’s wheels go round.

From the Arabian Peninsula and Persian Gulf, the field of play has expanded into the Islamic “stans” of the ancient Silk Road and the bloody rivalry between the British and Czarist empires that romantics still call “the Great Game.” Only now the imperial conflicts pit the United States and its NATO allies against a resurgent Russia, the increasingly energy-starved Chinese, and to a lesser extent the Iranian mullahs as well.

These are the lands of the first global oil rush – in Baku, Azerbaijan – and of the latest global resource race, where former President Bill Clinton flew in September 2005 to help Canadian mining and oil magnate Frank Giustra close a multi-million dollar deal on Kazakhstan’s uranium.

And all of this provides the background to Obama’s call for a timeout to define a new rationale for American – and NATO – efforts in AfPak – the new Washington -speak for the concatenation of Afghanistan and Pakistan.

The turbulence in Afghanistan and the Baluchi lands to the south has led the authoritative Energy Daily to dismiss the much- ballyhooed Turkmenistan-Afghanistan-Pakistan Pipeline as little more than “a pipe dream.” But any reassessment of our “mission” in AfPak will include the strategic importance of Pakistan and Afghanistan to the region as a whole, along with the mistaken belief that American and NATO military power can defeat the jihadi attacks and Taliban-like insurgencies that could one day endanger the vast treasure trove to the north.

Between endless imperial rivalries and propping up tin-pot dictators who make the Saudi royal family look humane, Biden was committing us to endless trouble in an effort to control global energy resources, most of which endanger the very future of our planet. I don’t think he knew what he was implying, but how apt that he ended his prophetic speech with a quote from the Irish poet William Butler Yeats, “All is changed, changed utterly: a terrible beauty has been born.”