Big, Bland John : Republican Senator from Texas Can Be Beaten 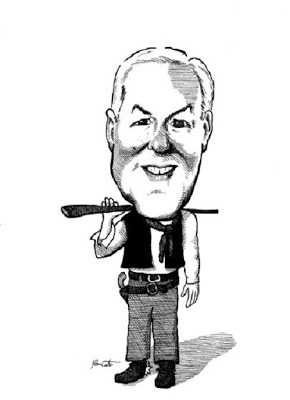 The Hon. John Cornyn of Texas. Illustration courtest of the Texas Observer.
How a dull exterior masks one of the most conservative records in the U.S. Senate
By Dave Mann

Democratic strategists in Texas have been telling anyone who will listen for the past year that they can defeat John Cornyn, the state’s junior U.S. senator, in November. This is big talk for a party that hasn’t won a statewide race since 1994 and hasn’t held Cornyn’s senate seat in 47 years. But they have some fancy polling data to back it up. More than a third of Texans wouldn’t know their junior senator if he fell on them. They call this “name ID” (or lack thereof) in the political consulting business. Cornyn’s is abysmal for a politician who’s served as a Texas Supreme Court justice, state attorney general, and, for the past six years, U.S. senator. Of those who do know Cornyn, fewer than 50 percent view him favorably—dangerous territory for an incumbent seeking re-election. Some of those same polls show him running closely with Democratic opponent Rick Noriega.

But you don’t need polling data to know that Cornyn can be beaten. Just watch him give a speech. “Dull” is an understatement.

When Cornyn spoke at the Republican state convention on June 13, for instance, the excitement level—even among the 5,000 ardent Republicans assembled in a downtown Houston convention center—resembled a chamber music recital more than a rock concert. They offered Cornyn polite applause, but nothing near the standing ovations for the state’s senior senator, Kay Bailey Hutchison, or for former presidential candidate Mike Huckabee.

Cornyn looks like a senator: He’s tall and lanky, with wispy white hair over the kind of broad, distinguished face that makes him look deliberative all the time. He’s also blessed with the bearing and charisma of a tax attorney. He doesn’t connect with audiences; he talks at them. In Houston in June, his deadpan delivery rendered the convention speech instantly forgettable.

The most memorable moment of Cornyn’s convention appearance was the “Big John” video that introduced him—an over-the-top spoof showing the lawyerly Cornyn in cowboy attire on a horse. A Jimmy Dean imitator crooned in the background about the exploits of Big John: “He rose to the top in just one term, kept Texas in power, made lesser states squirm—big John … big, bad John.” Cornyn looked ridiculous, an irony given that he actually spent a lot of time on a ranch as a child and regularly hunts and rides horses. Nonetheless, the video was universally mocked in newspapers and blogs, and, predictably, on the Daily Show.

Cornyn seemed to sense the ridicule to come. “I hope you got a smile out of that video,” he told the crowd. “My staff convinced me it would be a good idea. Maybe I need a new staff.” It was his best line of the day. He immediately turned once more to stone. “It was an attempt to bring a little humor to a subject I take very seriously.” He went on to detail his record in the Senate. Perhaps his speech deserved more attention. The record he must defend is so conservative that few Texas political observers—many of whom viewed Cornyn as a Republican moderate during his time in state government—would have foreseen it six years ago. With his bland style and senatorial looks, Cornyn doesn’t strike you as a right-wing ideologue. His record suggests just that.

“My policy on the war on terror is similar to Ronald Reagan: We win, they lose,” Cornyn told the assembled GOP faithful. (Indeed, he has voted consistently in the Senate to cede power to the executive branch. He voted to strip terrorism detainees of their habeas corpus rights and against congressional oversight of the CIA’s terrorist detention facilities. He backed the president’s secret wiretapping program and once remarked, in a debate over the PATRIOT Act, “None of your civil liberties matter much after you’re dead.”)

“I have protected the sanctity of human life,” Cornyn told the crowd. (He voted to strip funding from abortion and family planning services, and against increased access to birth control.) “I’ve opposed immoral experimentation done in the name of science.” (He’s opposed federal funding for stem cell research.)

“I have supported judges who respect the Constitution.” (He backed the nominations of both Supreme Court justices Samuel Alito and John Roberts, and a host of controversial judicial nominees, including Texas’ own Priscilla Owen.)

“I have supported the traditional family.” (He was a main proponent of a constitutional amendment banning gay marriage.)

When he finished, Cornyn didn’t linger on stage to bask in the crowd’s muted applause. He offered two quick, perfunctory waves to the crowd and ducked backstage.

One major aspect of Cornyn’s first term in the Senate that he didn’t mention: George W. Bush. No one has done more to propel Cornyn’s career than Bush. In turn, Cornyn has offered near complete fealty to the president. No other U.S. senator has voted so reliably with the White House in the past six years.

Now that Bush is one of the most unpopular presidents in American history, Cornyn is trying to distance himself. Even in Texas, Bush polls below 50 percent. Add to that a dissatisfied electorate—polls show about 80 percent of Americans say the country is on the “wrong track.” The historic candidacy of Barack Obama has energized Democrats, who seem poised to make big gains in Congress. This would seem a disastrous year for an incumbent senator who doesn’t excite even members of his own party.

Yet the Democrats seem wholly unprepared to take advantage. Republicans still hold an edge in Texas, and Cornyn has raised nearly 10 times more campaign money than his Democratic opponent. Despite his blandness and a record that borders on too conservative even for Texas, Cornyn may sneak into a second term.