Big Oil Led the Fight Against the Stimulus Plan 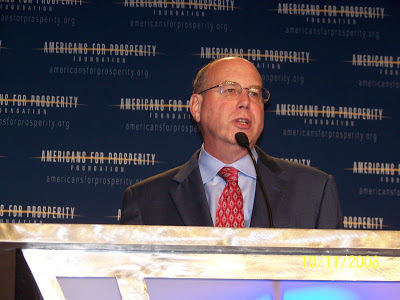 Why would an organization funded by oil and gas interests be hostile to the economic stimulus plan? Could it be the $50 billion the bill offers for more sustainable energy alternatives?

Public opposition to the plan was led by a group called Americans for Prosperity, which delivered 400,000 signatures on a petition to the Senate opposing the measure. As the group says in a statement at its nostimulus.com/:

We lost. But we put up a heckuva fight!

We turned what was supposed to sail through with 80 votes and no controversy into a bloody knock-down, drag-out fight.

We showed that Americans won’t passively sit by while our future is plundered. Just the fact that the bill shrank in conference committee — they almost always grow — showed that we had an impact.

Who is Americans for Prosperity? According to SourceWatch.org, the group was founded in 2003 with money from the Charles G. Koch Charitable Foundation, which is run by the billionaires behind Kansas-based Koch Industries — the national’s largest privately held oil and gas company. Media Transparency reports that the group gets substantial financial support from the Claude R. Lambe Charitable Foundation, another one of the Koch family foundations.

Why would an organization funded by oil and gas interests be hostile to the economic stimulus plan?

Could it be the $50 billion the bill offers for more sustainable energy alternatives?

Among other things, the stimulus bill allocates $5 billion to weatherize more than a million modest-income homes and another $6.3 billion to install energy-saving insulation, windows and furnaces in federally funded housing projects, USA Today reports. It also offers a tax credit of up to $7,500 for families that buy plug-in hybrid cars, and includes $500 million for green jobs training.

Americans for Prosperity has long worked against any government efforts to tackle climate disruption by promoting more sustainable energy. Last year Facing South reported on the group’s “Hot Air Tour,” which featured a hot-air balloon that traveled around the country with a message challenging what AFP dismisses as “global warming alarmism.”

Here’s the text for one of the Virginia ads titled “Tell Congress Not to Waste Our Money,” which makes clear Americans for Prosperity’s hostility to government support for more sustainable forms of energy:

MAN: OK, we’re in a recession.

Times are tough and jobs are scarce.

Congress talks about economic recovery, but what are they doing?

Spending billions of taxpayer dollars in the name of global warming and green energy.

Who is going to bail us out and pay our bills? Instead, they will:

… cost us more to heat our homes

… and regulate our local businesses and our jobs out of existence

No thanks. Congress should stop wasting their time and focus on real problems.

ANNOUNCER (VO): Isn’t it time Congress listened to the rest of us and got its science and priorities straight.

Paid for by Americans for Prosperity

One of the directors of Americans for Prosperity is North Carolina millionaire businessman and former state legislator Art Pope. He funds a network of pro-business think tanks that was behind an effort to scuttle efforts to address global warming in North Carolina, as was reported in a 2007 Facing South investigation titled “Hostile Climate.”

Americans for Prosperity has also been active on labor issues in North Carolina, where it’s fighting the Employee Free Choice Act, which would make it easier for workers unionize. Today the N.C. NAACP is holding a press conference to highlight the fact that the group is a front for big business.

Interestingly, Obama Press Secretary Robert Gibbs said the president chose Colorado as the place to sign the stimulus legislation into law “to highlight some of the investments to put people back to work — particularly clean-energy jobs.”