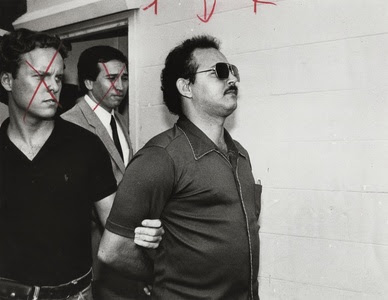 McCain’s terrorist: Eduardo Arocena.
Convicted murderer Eddie Arocena, being taken from FBI headquarters. Photo by Marice Cohn / Miami Herald.
‘McCain’s campaign and advisers find themselves allied with and/or supporting militants who have committed acts that any reasonable observer would define as terrorism’
By A.L. Bardach / October 15, 2008

The campaign of John McCain has made much of Barack Obama’s relationship with Weather Underground bomber-turned-university professor Bill Ayers, whom Republicans call an “unrepentant terrorist.” Indeed, the Obama-Ayers connection has become a centerpiece of the McCain-Palin campaign. V.P. nominee Sarah Palin mentions Ayers in practically every public appearance, and John McCain has all but promised to bring up Ayers in tonight’s debate. [And, indeed he did.]

McCain’s campaign, however, has its own questionable connections to terrorists. Since John F. Kennedy’s failed Bay of Pigs invasion, Florida’s Cuban-Americans have been regarded as a reliable Republican voting block. And from 1960 until Sept. 11, 2001, some exile hard-liners in Miami endorsed a double standard on terrorism in which anti-Castro militants and bombers were judged to be “freedom fighters,” regardless of the civilian deaths and collateral damage they caused in Cuba and the United States, as well as elsewhere. While the Cuban-American community has undergone dramatic changes—with the majority now supporting dialogue with Cuba and an end to restrictions on travel and remittances—hard-liners still control the major levers of power in Miami. Such is their clout in turning out reliable voters that McCain dropped his stance of 2000, when he said he would support normalizing relations with Cuba even under Fidel Castro. (“I’d be willing to do the same thing we did with—with Vietnam.”) McCain has allied his campaign with the Cuban Liberty Council, an uncompromising anti-Castro group that has all but dictated policy to George W. Bush. Two of the council’s most prominent members, media personality Ninoska Perez-Castellon and her husband, Roberto Martin Perez, have been among McCain’s most dedicated campaigners and champions in Miami.

As a result, McCain’s campaign and advisers find themselves allied with and/or supporting militants who have committed acts that any reasonable observer would define as terrorism. On July 20, while campaigning for McCain in Miami and just prior to speaking at a McCain event, Sen. Joe Lieberman met with the wife of convicted serial bomber Eduardo Arocena and promised to pursue a presidential pardon on his behalf. Arocena is the founder of the notorious Cuban exile militant group Omega 7, renowned for a string of bombings from 1975 to 1983. Arocena was convicted of the 1980 murder of a Cuban diplomat in Manhattan. In 1983, Arocena was arrested and charged with 42 counts pertaining to conspiracy, explosives, firearms, and destruction of foreign government property within the United States. He is currently serving a life sentence in federal prison in Indiana. His targets included:

* Madison Square Garden (he blew up an adjacent store);

* JFK airport (Arocena’s group planted a suitcase bomb intended for a TWA flight to Los Angeles—in protest of the airline’s flights to Cuba. The plane would have exploded if not for the fact that the bomb went off on the tarmac prior to being loaded);

* Avery Fisher Hall at Lincoln Center (causing damage to three levels of the theater and halting the performance of a music group from Cuba);

*the ticket office of the Soviet airline Aeroflot;

He also attempted to assassinate the Cuban ambassador to the United Nations.

Arocena was also convicted of the 1979 murder of New Jersey resident Eulalio José Negrín. The 37-year-old Negrín, who advocated diplomacy with Cuba, was machine-gunned down as he stepped into his car, dying in the arms of his 13-year-old son.

Nevertheless, Lieberman, who at the time was McCain’s first choice for vice president and is said to top McCain’s list for secretary of state, was caught on video promising Miriam Arocena he would petition Washington to grant a pardon to her husband. “It’s my responsibility; it’s my responsibility. I will carry [the pardon request] back. I will carry it back,” Lieberman told Arocena just before addressing a group at a McCain event. “I think of you like you were my family. … I’ll bring it back. I’ll do my best.”

Queried on the matter, a Lieberman spokesman demurred, telling the AP, “Sen. Lieberman does not intervene in criminal proceedings including requests for pardons. The correspondence was merely forwarded without any comment, endorsement or support whatsoever.”

Another vocal champion of an Arocena pardon is CLC member Roberto Martin Perez, who narrates a McCain commercial about Castro that has played in South Florida. His wife, radio host Ninoska Perez-Castellon, says that the McCain campaign has queried them about making a television spot as well.

Miami attorney Alfredo Duran, Bay of Pigs veteran and a leader of the Cuban Committee for Democracy, explains the GOP strategy: “They think that the Arocena campaign will energize a certain segment of the ultra-conservative exile community that will deliver for McCain and the Republican Party.”

Arocena is not the only militant who’s received help from McCain’s team. In September, McCain announced he was choosing Lincoln Diaz-Balart, a Republican congressman from Miami, as his senior adviser and spokesman on Latin America. Rep. Diaz-Balart is a fierce hard-liner on Cuba, advocating, at various times, a blockade of the island, even military action if needed, to unseat Fidel Castro (his former uncle, once married to Diaz-Balart’s aunt). He, too, has been a supporter of certain kinds of terrorists who have struck on American soil. Since 2000, Diaz-Balart and his colleague Rep. Ileana Ros-Lehtinen have lobbied for and helped win the release of several convicted exile terrorists from U.S. prisons. Among the most notorious were Omega 7 members Jose Dionisio Suarez Esquivel and Virgilio Paz Romero, both convicted for their roles in the 1976 assassination of Chilean diplomat Orlando Letelier and his American colleague Ronni Moffitt with a car bomb in Washington, D.C. According to four agents I interviewed, the FBI also suspects the pair were involved in other bombings and attacks. (Suarez is known by the nickname “Charco de Sangre”—Pool of Blood.)

Diaz-Balart also pushed for the release of Valentin Hernandez, who gunned down Miami resident and Cuban émigré Luciano Nieves in February 1975 for speaking out in support of a dialogue with Cuba. Nieves was ambushed by Hernandez in a hospital parking lot in Miami after visiting his 11-year-old son. Hernandez also went on to kill a former president of the Bay of Pigs Association in an internecine feud. Hernandez was captured in Puerto Rico in 1977 and sentenced to life in prison. Today, Hernandez is living freely in Florida.

Nor has McCain’s senior adviser Diaz-Balart ever wavered in seeking “due process” for legendary bombers and would-be Castro assassins Luis Posada Carriles and Orlando Bosch. Both were charged with the bombing of a Cuban airliner in 1976, killing all 73 civilian passengers—the first act of airline terrorism in the Americas. In 2005, when I asked him about those who died—many of them teenage athletes—Bosch responded, “We were at war with Castro, and in war, everything is valid.”

After serving nine years, Posada “escaped” from prison in Caracas, Venezuela, thanks to a bribe paid to the warden. Posada gives effusive thanks in his memoir, Los Caminos del Guerrero, to at least two members of the Cuban Liberty Council for their help in resettling him during his early fugitive days. After serving 11 years, Bosch won an acquittal (following death threats to several judges hearing the case). However, hundreds of pages of memorandum of the FBI, CIA, and State Department, released by the National Security Archives, leave no doubt that U.S. authorities fully concurred with Venezuelan, Trinidadian, and Cuban intelligence that the two men had masterminded the airplane bombing.

Former Attorney General Richard Thornburgh described Bosch, who spent four years in federal prison for firing a bazooka into a Polish freighter bound for Havana in Miami’s harbor, as an “unreformed terrorist” and recommended immediate deportation when he showed up in Miami in 1988. But there were political considerations in Miami. Ros-Lehtinen, then running for Congress and now the Republican leader of the House foreign-affairs committee, lauded Bosch as a hero and a patriot. After she personally lobbied then-President George Bush (with her campaign manager Jeb Bush at a meeting noted in the Miami media), Bush overruled the FBI and the Justice and State departments, and Bosch was granted U.S. residency.

In 1998, I interviewed Luis Posada in Aruba for an investigative series for the New York Times in which he claimed to have orchestrated numerous attacks on both civilian and military targets during his 50-year war to topple Castro. Most notably, Posada took credit for masterminding the 1997 bombings of Cuban hotels that killed an Italian vacationer and wounded 11 others.

Posada made his last failed attempt to eliminate Fidel Castro at the Ibero-America Summit in Panama in November 2000. After his trial and conviction in 2004, Diaz-Balart (along with his brother, Rep. Mario Diaz-Balart, and Ros-Lehtinen), wrote at least two letters on official U.S. Congress stationery to Panamanian President Mireya Moscoso seeking the release of Posada and his collaborators. “We ask respectfully that you pardon Luis Posada Carriles, Guillermo Novo Sampol, Pedro Crispin Remon and Gaspar Jimenez Escobedo,” went one missive. On Aug. 24, 2004, Posada and his fellow conspirators—all with colorful rap sheets—received a last-minute pardon from the outgoing Moscoso.

Posada’s supporters tell me that he had been quietly assured by several Miami exile leaders that he would be allowed to live free in the United States like Bosch. While still a fugitive, Posada slipped into Miami in 2005. But following international outrage over his release, a federal grand jury was impaneled in Newark, N.J., in January 2006 to hear evidence against Posada for the Havana hotel bombings. FBI investigators testified that Posada had smuggled plastic explosives in shampoo bottles and shoes into Cuba a few weeks prior to the bombings. At the cost of millions of dollars, dozens of witnesses have testified to the grand jury over two and a half years. On Sept. 19 and 20, 2007, two witnesses, compelled to turn state’s evidence, offered damning evidence implicating Posada and his confederates. (Disclosure: The New York Times and I were subpoenaed in the matter but have not appeared before the grand jury, citing First Amendment protections.)

But election year politics seem to have interfered with the case. One of the attorneys representing Posada’s comrades in the case told me that the defendants received target letters last year and were warned by the FBI that they would be indicted by the end of 2007. Now he says it is certain nothing will happen because of the 2008 elections and the damage that could be done to the McCain ticket, the Diaz-Balarts, and Ros-Lehtinen. Another Posada attorney told me that he had been assured that Posada’s case “is being handled at the highest levels” of the Justice Department.

In the meantime, Posada has resettled in Miami. In November 2007, the Big Five Club, an elite watering hole for Miami’s movers and shakers, hosted an art show and fundraiser to benefit Posada and his comrade-in-arms, Letelier assassin José Dionisio Suárez. On May 2, 2008, there was another gala fundraiser in honor of Luis Posada at the Big Five Club. Lincoln Diaz-Balart and Ros-Lehtinen were both invited.

A few months earlier, a relaxed and expansive Posada attended a tribute for a well-known Cuban dissident. Just a few feet away from him, amid the ding of clinking glasses, were Reps. Lincoln Diaz-Balart and Ros-Lehtinen. Should McCain-Palin prevail in November, those pesky, pending indictments against Posada are very likely to get tossed.

[Ann Louise Bardach has written the “Interrogations” column for Slate and is the author of Without Fidel: A Death Foretold in Miami, Havana, and Washington, to be published in April, and Cuba Confidential: Love and Vengeance in Miami and Havana.]