Bill Fletcher : ‘Enthusiasm Gap’ and the Threat from the Far Right 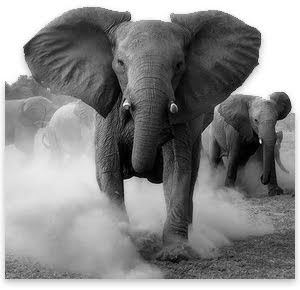 Enthusiasm and voting:
The Far Right, and the immediate challenge

This is not the boy who cried wolf… There is an energized, right-wing army waiting to turn back the clock.

There has been a lot of discussion about the apparent enthusiasm gap between Democratic voters and Republican voters. While it is beyond question that the Obama administration has accomplished significant reforms in its first two years, the manner in which these have been accomplished, combined with the fact that they were generally not deep enough, has led many liberal and progressive voters to despair.

So, what should we think as we quickly approach November 2nd? First, there were too many magical expectations of both the Obama administration and most Democrats in Congress. Many of us forgot that while they represented a break with the corrupt Bush era, they were not coming into D.C. with a red flag, a pink flag or a purple flag. They came to stabilize the system in a period of crisis.

President Obama chose to surround himself with advisers who either did not want to appear to believe or in fact did not believe that dramatic structural reforms were necessary in order to address the depth of the economic and environmental crises we face. They also believed, for reasons that mystify me, that they could work out a compromise with so-called moderate Republicans.

The deeper problem, and one pointed out by many people, is that the Obama administration did not encourage the continued mobilization of its base to blunt the predictable assaults from the political right. As a result, many people sat home waiting to be called upon to mobilize. Instead, we received emails or phone calls asking us to make financial contributions, or perhaps to send a note regarding an issue, but we were not called upon to hit the streets.

Unfortunately, the main problem rests neither with the Obama administration nor the Democrats in Congress. It rests with the failure of the social forces that elected them to keep the pressure on. Too many of us expected results without continuous demand.

Ok, so now that we have gotten this out of our system, we have to face the immediate challenge. I am not going to list the positive things that have been produced by the Obama administration. I am also not going to list the bad calls or stands with which I disagree. I am focusing on those on the right attempting to move in, and frankly they are an unsettling bunch.

You see, my enthusiasm for voting rests on the fact that I am not interested in people who worship ignorance, intolerance, war, and the strengthening of a plutocracy increasing their grip on power and pulling this country any further to the right than it currently is. In other words, the challenge for progressives is two-fold: one, to beat back the irrationalist right; and, two, to move against the right-wing of the Democratic Party and to push for real change.

Liberals and progressives get called out every election cycle to defend the Democratic Party against the barbarians at the gates. We often do that and then turn away in disgust. Rarely do we either take on the right-wing in the Democratic Party or build up social forces that are energized about keeping elected leaders accountable. We keep talking the talk, but we do not follow through with the walk. When we get angry we talk about creating a third party, but we don’t move a strategy to put the heat under the Democratic Party.

Well, we are now facing a moment of truth. This is not the boy who cried wolf. In addition to the Democratic Congress as a whole being under assault from the Republicans, there are some liberal and progressive Democratic elected officials who are under siege, and about whom we should be concerned. There is an energized, right-wing army waiting to turn back the clock. So progressives should be enthused right now; enthused to defend our friends, but also to defeat our enemies.

But we should also be motivated to put into practice a different set of politics. We have got to get off the defensive and promote a different sort of vision, an inspiring, progressive vision. That may mean that we part company with some elected leaders who call themselves Democrats, but the time has come when we cannot afford to simply push the button because we see a donkey. Frankly, I am tired of being kicked in the ass.

[Bill Fletcher, Jr. is a Senior Scholar with the Institute for Policy Studies, the immediate past president of TransAfrica Forum and the co-author of Solidarity Divided: The Crisis in Organized Labor and A New Path Toward Social Justice. He can be reached at papaq54@hotmail.com. This article was also published at Progressive America Rising.]

2 Responses to Bill Fletcher : ‘Enthusiasm Gap’ and the Threat from the Far Right