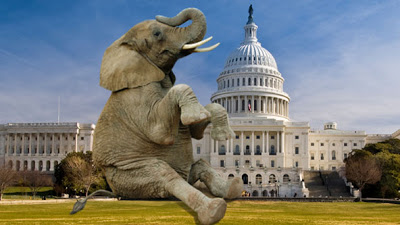 Image from The Fiscal Times.
The Republican lock on Congress
means a strategy for the cities

If we are to fight it out on the economy, this will not happen in the Republican Congressional Districts. It is a fight that we will have to take up in cities around the country. It means social protests which are disruptive.

There is a strategic question that faces progressives, one that is receiving increased attention. Due to the 2010 elections and the Republican domination of state legislatures, Congressional Districts have been gerrymandered in order to guarantee a lack of any significant electoral challenges. In other words, these Districts have Republican Congresspeople who are not worried about opposition.

As we saw in the lead up to the “fiscal cliff” negotiations/resolution, most Republicans felt no internal pressure to compromise. It is quite likely that they will feel little pressure in their districts for at least 10 years. As a result the sort of pressure that they must feel must transcend their districts and actually be more at the societal level.

What this means is that while progressives absolutely need an independent electoral strategy that builds locally-based organizations capable of successfully running candidates for office — both inside and outside of the Democratic primary system — that is insufficient.

In the current context the implications should be clear. If, for instance, we are to fight it out on the economy and specifically on unemployment, this will not happen on the basis of fights in the Republican Congressional Districts. It will be a fight that we will have to take up in cities, including but not limited to state capitols, around the country. It means social protests which are disruptive.

In order for this to happen we must actually re-train many social movement activists and thinkers in the lessons of the 1930s labor movement, the 1950s-1960s freedom movements (including but not limited to the Civil Rights Movement), the movement against the Vietnam War, and the work of the early environmental movement.

Occupy, in that sense, was onto something. We must carry out a fight for space as part of the fight for power. Land occupations, eviction blockades, boycotts, as well as mass demonstrations, are all critical. [Note: in fact, we need, right now, a series of REALLY mass marches for jobs.] In other words, the sort of pressure that needs to be brought about must be something that Republicans AND Democrats feel, and in fact, becomes a serious source of concern.

Before we find ourselves wallowing in self-pity as we worry about the Republican “lock,” let’s rethink our strategy and tactics. We may be able to flip the script, and sooner rather than in the distant future.

This article was originally published at billfletcherjr.com and was distributed by Progressive America Rising.

[Bill Fletcher, Jr., is a racial justice, labor, and international writer and activist. He is a Senior Scholar with the Institute for Policy Studies, the immediate past president of TransAfrica Forum, an editorial board member of BlackCommentator.com, the co-author of Solidarity Divided, and the author of They’re Bankrupting Us: And Twenty other Myths about Unions. He can be reached at billfletcherjr@gmail.com. Read more articles by and about Bill Fletcher on The Rag Blog.]