Bill Moyers and Prof. Andrew J. Bacevich on The Limits of Power 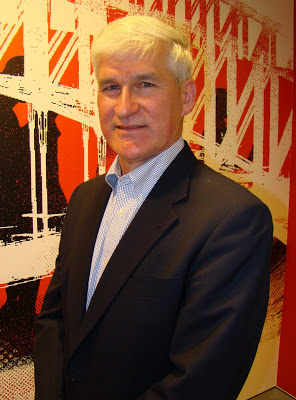 See video of interview on Bill Moyers’ Journal, below.

As campaign ads urge voters to consider who will be a better “Commander in Chief,” Andrew J. Bacevich — Professor of International Relations at Boston University, retired Army colonel, and West Point graduate — joins Bill Moyers on the JOURNAL to encourage viewers to take a step back and connect the dots between U.S. foreign policy, consumerism, politics, and militarism.

Bacevich begins his new book, THE LIMITS OF POWER: THE END OF AMERICAN EXCEPTIONALISM, with an epigraph taken from the Bible: “Put thine house in order.” Bacevich explained his choice to Bill Moyers:

I’ve been troubled by the course of U.S. foreign policy for a long, long time. And I wrote the book in order to sort out my own thinking about where our basic problems lay. And I really reached the conclusion that our biggest problems are within.

Bacevich sees three crises looming in the United States today, as he explains in the introduction to THE LIMITS OF POWER.

The United States today finds itself threatened by three interlocking crises. The first of these crises is economic and cultural, the second political, and the third military. All three share this characteristic: They are of our own making. In assessing the predicament that results from these crises, THE LIMITS OF POWER employs what might be called a Niebuhrean perspective. Writing decades ago, Reinhold Niebuhr anticipated that predicament with uncanny accuracy and astonishing prescience. As such, perhaps more than any other figure in our recent history, he may help us discern a way out.

Reinhold Niebuhr, whose 20th century work related theology to modern society and politics, is important in Bacevich’s analysis, and in a university lecture at Boston University, Bacevich presented Niebuhr as a prophet with stern warnings for modern America:

As prophet, Niebuhr warned that what he called “our dreams of managing history” — dreams borne out of a peculiar combination of arrogance, hypocrisy, and self-delusion — posed a large and potentially mortal threat to the United States. Today we ignore that warning at our peril.

Since the end of the Cold War the management of history has emerged as the all but explicitly stated purpose of American statecraft. In Washington, politicians speak knowingly about history’s clearly discerned purpose and about the responsibility of the United States, at the zenith of its power, to guide history to its intended destination.

A key message Bacevich takes from Niebuhr is one of humility. Not only must we understand the limits of what a government — and its military — can accomplish, but we must resist the temptation to guide history towards some perceived purpose or end:

In Niebuhr’s view, although history may be purposeful, it is also opaque, a drama in which both the story line and the dénouement remain hidden from view. The twists and turns that the plot has already taken suggest the need for a certain modesty in forecasting what is still to come. Yet as Niebuhr writes, “modern man lacks the humility to accept the fact that the whole drama of history is enacted in a frame of meaning too large for human comprehension or management.”

Such humility is in particularly short supply in present-day Washington. There, especially among neoconservatives and neoliberals, the conviction persists that Americans are called up on to serve, in Niebuhr’s most memorable phrase, “as tutors of mankind in its pilgrimage to perfection.”

And so, Bacevich concludes, we cannot solve our problems by simply electing a new president, or removing a beligerant foreign regime. To address our triplet crises, we must first confront our core misconceptions. Which we do, Bacevich explains, by confronting our consumerism and

…giving up our Messianic dreams and ceasing our efforts to coerce history in a particular direction. This does not imply a policy of isolationism. It does imply attending less to the world outside of our borders and more to the circumstances within. It means ratcheting down our expectations. Americans need what Niebuhr described as “a sense of modesty about the virtue, wisdom and power available to us for the resolution of [history’s] perplexities.”

[Andrew J. Bacevich is Professor of International Relations and History at Boston University. A graduate of the U. S. Military Academy, he received his Ph. D. in American Diplomatic History from Princeton University. Before joining the faculty of Boston University in 1998, he taught at West Point and at Johns Hopkins University.

Dr. Bacevich is the author of THE LIMITS OF POWER: AMERICAN EXCEPTIONALISM (2008). His previous books include AMERICAN EMPIRE: THE REALITIES AND CONSEQUENCES OF U. S. DIPLOMACY (2002), THE IMPERIAL TENSE: PROBLEMS AND PROSPECTS OF AMERICAN EMPIRE (2003) (editor), THE NEW AMERICAN MILITARISM: HOW AMERICANS ARE SEDUCED BY WAR (2005), and THE LONG WAR: A NEW HISTORY OF US NATIONAL SECURITY POLICY SINCE WORLD WAR II (2007) (editor).

His essays and reviews have appeared in a wide variety of scholarly and general interest publications including THE WILSON QUARTERLY, THE NATIONAL INTEREST, FOREIGN AFFAIRS, FOREIGN POLICY, THE NATION, THE AMERICAN CONSERVATIVE, AND THE NEW REPUBLIC . His op-eds have appeared in the NEW YORK TIMES, WASHINGTON POST, WALL STREET JOURNAL, FINANCIAL TIMES, BOSTON GLOBE, LOS ANGELES TIMES, and USA TODAY, among other newspapers.]

Read the full introduction to The Limits of Power.

2 Responses to Bill Moyers and Prof. Andrew J. Bacevich on The Limits of Power