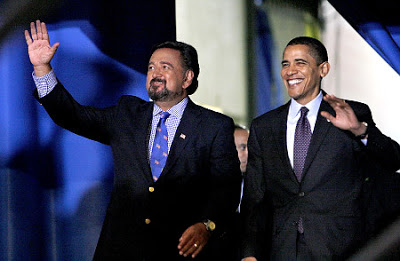 The nation’s only Hispanic governor, New Mexico’s Bill Richardson, formally announced his endorsement of Barack Obama Friday, March 21, in Portland, Oregon. Photo by Brandon / AP.
Richardson is ‘a vicious politician’ and an ‘opportunist’
By Mark Rudd / The Rag Blog / August 4, 2008

As a citizen of New Mexico who has had to suffer through six miserable years of Bill Richardson’s governorship, I could write a book on what a vicious politician and person he is–a true opportunist scumbag. His administration has been thoroughly incompetent, even compared to that of the libertarian jerk who preceded him, with precisely one sole purpose: to get Richardson elected President. As Secretary of Energy he proved himself to be absolutely without principle, reversing his previous positions and supporting every single nuclear initiative as well as persecuting Wen Ho Lee. His reputation as an environmentalist has no substance behind it. His sole principle iin politics and life is Bill Richardson.

Outside New Mexico, Hispanics don’t recognize him at all. his showing in the primaries was insignificant. Plus, he’s really ugly. He takes a terrible picture due to his weight problem, though his recent beard has helped a bit. He also has a terrible Bill Clinton-type womanizing reputation. If Obama selects him as VP he’ll surely bring down the ticket. I’d be surprised if the Obama people don’t already know this. They probably offered him a sinecure like UN ambassador, where he was under Clinton, in return for his switching over during the primary campaign.

Bill Richardson has the ‘best judgement and the best experience’ to be Obama’s running mate
By Michael Alan Dover / The Rag Blog / August 4, 2008

…Since Iowa I’ve been convinced that Gov. Richardson is the best VP candidate and am still convinced. It’s simply a matter of who has the best judgement and the best experience. It’s not what part of the country they are from, what states they can bring, what demographics are needed. And it’s not about having a Governor on the ticket. It’s who inspires trust. And, yes, name recognition is important, and Richardson has that.

What is really amazing is how none of the media mention him, as if two people of color on the ticket would somehow sink it. I don’t agree. It’s not just change people want. It’s honesty and fairness. To deny the VP slot to the clearly most qualified potential candidate because he would be person of color #2 on the ticket would not be fair.

I recall well the Democratic convention which nominated Sen. Lieberman. It was electrifying that a Jew had been nominated, but what was clear to me from the TV version at least was that the most electrified delegates of all were the African-American delegates! They were clearly inspired and excited by the realization that once the religion barrier had finally been broken (first a Catholic, now a Jew and now doubt one year a Muslim such as the Representative from Minnesota), the race barrier would also soon be broken. I recall well and have an MP3 of the very moving concluding prayer from that convention, by an African-American pastor from Arkansas, who went out of the way to include ecumenical content with a strong focus on Old Testament conent. I’ve posted it here.

As we ready ourselves for the 2008 convention and consider our political commitments, regardless of our religious views I think it is helpful to hear this.

Now we are on the verge of breaking that very race barrier to the Democratic nomination. Nominating Gov. Richardson would not be about further breaking that race barrier. It would be about selecting the best candidate. But imagine the degree to which people of any religion or any culture or “race” would be electrified by the realization that the political process in this great democracy is potentially open to all.

[Both Mark Rudd and Michael Alan Dover are affiliated with Progressives for Obama.]