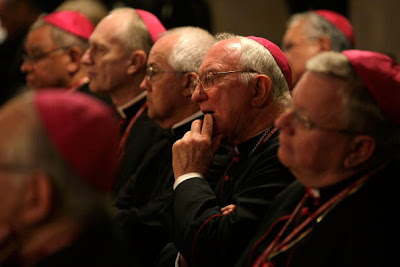 The present effort to politicize the church and marginalize pro-choice will drive away more of the flock and quickly shed the intellectual credibility it so laboriously earned.

My friend Lee recently entered an art competition and won first prize with a moving painting on the folly of war. His other entry was entitled “Right to Life.” In the upper left-hand corner was a mitered bishop proclaiming that life begins at conception and that all life is sacred.

In the lower right, the same bishop is busy denying medical assistance to the poor, childcare, and other forms of help to those who need it.

Of course, the bishops do not actively speak against helping the poor, but their political activism seems to have had the same effect because the large minority of political bishops who back the Republicans, are in effect, joining the GOP’s crusade against the poor and marginalized. They have also rounded up the votes that enabled George W. Bush to continue the war in Iraq and to torture prisoners.

Many Americans see only that a substantial minority of Catholic bishops appear to have become Republican operatives and are busy turning local churches into Republican political club houses. Lee and many others do not read the documents churned out by the U.S. bishops. He and others only see only see the political bishops refusing to allow pro-choice Catholic politicians to receive communion. They hear harsh, uncharitable, condemnations and altogether too few words trying to explain their positions to people not subject to their religious authority. In the recent debate over Notre Dame’s granting President Barack Obama an honorary degree, we saw 70 political bishops denouncing some of their co-religionists.

We would hope that the bishops would not resort to medieval threats and uncharitable language. These are bright, highly–educated men who should be able to make their case in terms that people who rely upon science and reason could respect. When the bishops copy the language and tactics of their right-wing Protestant political allies, observers simply conclude that these Catholic bishops are similarly thoughtless and uncivil.

In their defense, it should be noted that the U.S. bishops conference is on record as supporting the entire Roman Catholic peace and social justice agenda. The trouble is that the American bishops did not exert themselves in supporting the Vatican’s opposition to the Iraq war or its call for an even-handed position in the Israeli-Palestinian dispute. Too often their positions on social justice issues appeared to be muted or even lip service. Critics cannot be blamed for concluding that the bishops care a lot more about their teachings on abortion and stem cell research than about these other questions. Has any Congressman been denied communion because he supported the death penalty and opposed extending unemployment benefits or including assistance for the destitute in the stimulus package?

The late Joseph Cardinal Bernardin tried to explain the great bulk of Roman Catholic teachings in terms of the fundamental belief in the dignity of every human being. It would be helpful if the bishops tied their views on abortion and stem cell research to the Catholic positions on peace, the death penalty, and a host of issues addressed in the social encyclicals. Of course, they would need to be willing to exert as much energy in opposing an unjust war and defending the poor as they expend now in defense of abortion policies that are very unlikely to become public policy in the near future. Roe v. Wade is probably settled law, and there are many political reasons to explain why both parties are not likely to change the status quo.

Above all they need to abandon the harsh language and medieval threats. Such behavior leads many to forget that these men are highly educated and to group them with the right-wing Protestant allies who often seem to lack civility and an ability for nuanced judgment. Some of us wonder if all the harsh language might inspire unhinged individuals to seek to kill abortionists.

The nub of the abortion problem is that many intelligent people think the embryo is part of our human species but they do not think it is yet a person. That is a defensible position, and the church, while disagreeing, should recognize this. The union of the sperm in the egg is part of a process and can no longer be ascribed to a precise moment. Why not admit that? On the other hand, none of this damages the Catholic position, in the words of John Paul II, that “the mere probability that a human person is involved would suffice to justify an absolutely clear prohibition or any intervention aimed at killing a human embryo.”

This is not much different from the position of Immanuel Kant, the great defender of human dignity. It is a reasonable position. It would be more persuasive if the church coupled it with its other concerns for human dignity in a wide variety of areas from labor law to health care for poor children.

By giving the appearance that the Catholic Church in the United States is becoming an arm of the Republican Party, the bishops have re-ignited a latent anti-Catholicism. Their nearly criminal handling of the sex abuse scandal has alienated the larger part of a whole generation. It is no wonder that so many women see the church as anti-woman. It offers a lame explanation for not ordaining women — women do not come with the same physical equipment as men. If the church were to adopt Cardinal Bernadine’s “seamless garment” argument and give as much attention to children’s health matters as to abortion, more women might accept the sincerity of its arguments and perhaps write off the refusal to ordain women as simply an inability to shed some very undesirable cultural baggage.

The present course of the American bishops seems to be part of the ancient “faithful remnant” outlook. In the time of Christ, his righteous opponents, intent upon absolutely strict observance of the law as they saw it, sought to separate out a holy remnant, but it is very doubtful that he was interested in doing the same thing. Maybe the bishops should see pro-choice advocates as Christ saw the tax collectors as neighbors and try to win them over.

The present effort to politicize the church and marginalize pro-choice will drive away more of the flock and quickly shed the intellectual credibility it so laboriously earned. Catholics will be viewed more and more as something akin to the evangelicals and fundamentalists — politically oriented and opposed to full dialogue and engagement. However, the bishops will enjoy the support of wealthy right-wing Catholics and they will have high visibility and some influence when Republicans are in power. Their rewards will be lip service on abortion and photographs of churchmen with important people. If they are not serious about the rest of the Catholic agenda, this might be their best course.

This entry was posted in Rag Bloggers and tagged Abortion Rights, Catholic Church, Freedom of Choice. Bookmark the permalink.

2 Responses to Bishop Takes Pawn : The Real Meaning of ‘Pro-Life’