Blowback from US Aggression – Get Used to It 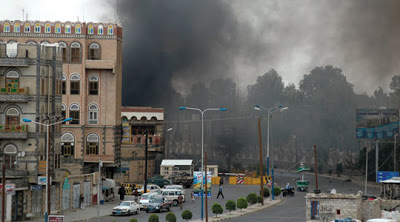 Smoke billows outside the US embassy in Sana yesterday after a car bomb set off a series of explosions outside the heavily fortified embassy in Yemen.
Reaping The Iraq Whirlwind
By M Duss / September 18, 2008

The Washington Post confirms that yesterday’s terrorist attack on the U.S. embassy in Sanaa was the work of an Al Qaeda affiliate, using tactics developed in Iraq:

The use of two vehicle bombs — one to breach the perimeter of a compound, a second to drive inside and explode — is a tactic used by the Sunni insurgent group al-Qaeda in Iraq. […]

He said a new, less-compromising generation of al-Qaeda leaders emerged, many of them moving into action after escaping from a Yemeni prison that year, he said.[…]

The new leaders have found followers among al-Qaeda fighters returning from Iraq. “The quieter it is in Iraq, the more inflamed it is here,” as Yemeni fighters travel back and forth, said Nabil al-Sofee, a former spokesman for a Yemeni Islamist political party who is now an analyst.

Those who have been following the Iraq debate might remember “flypaper theory,” which was one of the earliest exponents of the “incoherent post hoc justifications for the Iraq war” genre. The idea was that there was some limited number of terrorists in the Middle East, and the presence of an occupying U.S. army would lure them to Iraq, whereupon they could all be conveniently killed, presumably as soon as they stepped off the bus.

This plan was prevented from working only by the fact that it was staggeringly dumb. The U.S. occupation radicalized scores of young Muslims, many of whom traveled to Iraq, where they learned terror warfare and were galvanized in the global jihad. And now they’ve begun returning home, to share the tactics and technology developed in a laboratory we provided for them by invading Iraq. The violence in the Nahr al-Bared refugee camp in Lebanon in May 2007 was one instance of this. Yesterday’s attack in Yemen is another.

Various Bush administration courtiers have tried to spin the containment of Al Qaeda in Iraq as a vindication of the invasion of Iraq, eliding the fact that Al Qaeda in Iraq was a direct consequence of America in Iraq. By mispresenting Al Qaeda as a single, united faction under the command of Osama bin Laden — rather than a collection of factions gathered beneath the banner of global jihad — Bush and his supporters have misrepresented successes against AQI as if they represented successes against Al Qaeda as a whole. In doing this, they have ignored the ideological and propaganda components of Al Qaeda’s continuing operations in the region, and the ways in which the Iraq war has profited both.

And this from a commenter, Mugsy: “Imagine a terrorist network with Iraq as an arsenal and as a training ground…” – [President George W. Bush giving reason why we should invade Iraq. 11/4/02]