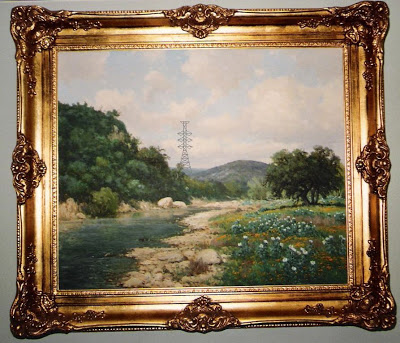 Blowing in the Wind

It’s the hitherto scenic, big sky Hill Country, with more stars than you can count in the night sky, that’s been chosen to carry the burden of hosting those high-voltage power lines between West Texas and the I-35 corridor and beyond.

Renewable energy… it’s a good thing, right? And all us progressive types are really excited about getting behind the “new green economy.”

Then why has Texas, of all places, which is hardly known for supporting any tree-hugging, progressive tendencies among its citizenry, taken the lead in generating electricity from wind power? Why did the Texas legislature, together with the Public Utilities Commission — folks who are generally more friendly to Big Oil than the Sierra Club — create something called “Competitive Renewable Energy Zones” (CREZ) along with the wind farms to feed them, way back in 2005, smack dab in the middle of the Bush administration?

The answer, my friend, is… probably quite interesting, if my relatively cursory digs through the tangle of ol’ boy networks and overlapping board memberships to follow the money are any indication.

Meantime, plans are now proceeding full steam ahead to hook up all those new West Texas wind farms to “the grid” and build the infrastructure needed to transmit their renewable product to urban areas where it’s needed. Or will be needed, some day, so the theory goes. Because there appears to be no compelling need for all that electricity right at the present moment, we’ve got plenty.

The producers, however — persuaded to set themselves up in the stark landscape of West Texas by promises of great things to come — can’t start collecting their “federal production tax credits” and sell-able “renewable energy credits” till they have a functioning outlet to plug into. And it’s the hitherto scenic, big sky Hill Country, with more stars than you can count in the night sky, that’s been chosen to carry the burden of hosting those high-voltage power lines between West Texas and the I-35 corridor and beyond.

The diverse group of people who live in those Hill Country counties don’t like it much, and are mobilizing with energy and passion to head off, or at least minimize, a rape of the landscape that will be difficult if not impossible to reverse once it starts. Check out what they’re doing, and how you might be able to support them, at one or more of the following links:

To learn about the downsides of industrial wind power, see Wind Power Facts — it’s a good starting place to understand the issues.