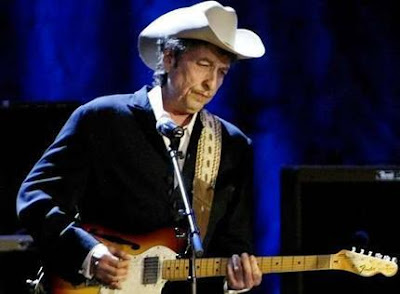 Bob Dylan was more than iconic Sunday night in The Woodlands outside Houston. He rocked and grooved!

It was a concert that I wasn’t too interested in, so I stayed home and kept overdubbing my way thru Willie Nelson and John Mellencamp’s set times. (Yeah — I missed Willie. So, sue me!)

But — Bob Dylan is an icon, one I hadn’t seen since 2004 in Amsterdam (and the best thing about that show was watching one of our party, Carolyn Wonderland, go backstage to meet with Bob at intermission), so I saddled up the Blue Scion, and drifted out to the Woodlands after dark.

I’d heard that Bob had taken to saying he was from Texas (in some European interviews). It seemed like more amusing Bobness with the press, but last night I found out that his reasons for making that statement were deeper than they initially appeared!

The band’s groove was deep! Musically, the history and home towns didn’t matter. On this tour, The Bob Dylan Show featured a great Texas roadhouse band.

Bob’s suit was black and his hat was white. The rest of the band wore all black with white sport coats.

Every musician onstage played rhythm! The band’s groove was deep, I tell ya!

No solos except for a few from Bob!

Rearranging old classics into mostly Texas shuffles on this tour, the band played those as if they had all grown up on the Texas Gulf Coast. It felt good! Watching those fellas in their matching jackets and hats, I felt like I was 14 in 1966 again, sneaking out of the house and taking the old Dodge Dart to some faraway East Texas dance hall to see some space-aged Ernest Tubb and Texas Troubadours.

Bob’s still in Texas for a spell. He’s at Round Rock tonight.

Take advantage of it if you can.