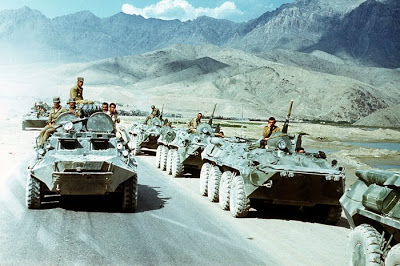 In 2010 more than 600 individuals were still imprisoned by the Democratic Obama Administration at its Bagram detention facility in Afghanistan, and many of these Bagram prisoners have apparently been held without access to lawyers or an opportunity to legally challenge the basis of their imprisonment for as long as six years.

Yet none of the U.S. government officials responsible for escalating the covert and overt U.S. military intervention in Afghanistan since the 1970s have ever been held legally accountable for the morally disastrous humanitarian effects their policies have had on the history of people in Afghanistan.

Yet in April 1986, the People’s Democratic Party of Afghanistan (PDPA)-Parcham faction leader who had been installed in late December 1979 by Soviet troops as the head of the PDPA regime in Afghanistan — Babrak Karmal — was replaced by the former head of the PDPA regime’s secret police, Dr. Mohammad Najibullah, after Najibullah was elected by the PDPA’s Central Committee to be its new general secretary.

Subsequently, on January 1, 1987, the new PDPA regime head of state attempted to bring peace to the people of Afghanistan and negotiate an end to the 1980s Afghan war by announcing a “program of `national reconciliation’ comprising three key elements: a six-month unilateral cease-fire, the formation of a government of `national unity’ and the return of over 5 million refugees from Pakistan and Iran,” according to Angelo Rasanayagam’s Afghanistan: A Modern History. The same book also recalled:

An “Extraordinary Supreme Commission for National Reconciliation” was set up and branches were opened all over the country. Their job was to make contact with refugees… in exile or fighting with resistance groups, pass on the message of peace, and distribute essential relief items for the use of returning refugees. Other inducements offered were tax concessions, the return of confiscated property and the deferment of military service.

Radio Kabul started calling the Mujahideen fighters “angry brothers” rather than “bandits.” Some 4000… prisoners were released. Six months later, just before the expiring of the 6-month ceasefire, Najibullah was able to claim that 59,000 refugees had returned; tens of thousands of men were negotiating with the government; 4,000 representatives of the opposition had been included in the reconciliation committees; and coalition governments had already been formed in several villages, sub-districts, districts and provinces.”

But the alliance of seven U.S., Pakistan, and Saudi government-sponsored anti-feminist Afghan political parties apparently “turned down with disbelief and contempt” the January 1987 peace proposals of the PDPA regime in Afghanistan. As the same book explained:

The Islamic parties… claiming to represent the Mujahideen resistance had developed into vested interests that were not receptive to power-sharing arrangements. They and their Pakistani sponsors, replete with funds and weapons generously contributed by “the international community,” developed their own agendas for a post-Soviet Afghanistan…The parties owed their “influence” to the fact that they served as somewhat porous conduits for the U.S. and Saudi funds and weapons channeled to the resistance fighters inside Afghanistan by Pakistan’s ISI [Inter-Service Intelligence]…

Ironically, “a survey among Afghan refugees conducted in 1987 by one of Afghanistan’s outstanding academics and intellectuals, Professor S.B. Majrooh, found that less than half a percent of those polled would choose one of the seven” Afghan Islamic political party “leaders to rule a free Afghanistan,” according to Afghanistan: A Modern History. Coincidentally, the Union of Mujahideen (a coalition of these seven unpopular Islamic parties) apparently then arranged for Professor Majrooh to be assassinated in his office in Peshawar on February 11, 1988, shortly after his survey results were made public.

Yet despite the rejection of its January 1987 peace proposals by the U.S., Pakistani and Saudi government-sponsored Islamic parties, the PDPA regime extended its unilateral January 1987 ceasefire in Afghanistan for another six months in June 1987, and it invited its right-wing Afghan political opponents to suggest changes in the draft of a proposed new Afghan constitution which it published in July 1987.

The proposed new Afghan constitution — that set up a democratic, multiparty parliamentary political system in Afghanistan in which Islam was the state religion — was then formally approved by the PDPA regime’s parliament (jirga) in November 1987.

On February 8, 1988, the Gorbachev regime in the Soviet Union next announced that on May 15, 1988, it would start to withdraw the 85,000 Soviet troops still in Afghanistan, and that it would have all Soviet troops pulled out of Afghanistan by March 15, 1989.

Parliamentary elections were then held in Afghanistan in April 1988 in which the National Fatherland Front [NFF] and other newly formed Afghan parties won more seats in the new, democratically-elected Afghan parliament than did the PDPA — which just won 22 percent of the parliamentary seats. In addition, 25 percent of the seats in the lower house of the new Afghan parliament were left vacant for representatives of the Islamic opposition parties in Afghanistan- — that were still unwilling to negotiate an agreement in 1988 that would finally bring peace to Afghanistan.

A peace agreement between the Pakistani government and the Afghan government — guaranteed by both the Reagan Administration and the Gorbachev regime in the Soviet Union — was, however, signed on April 14, 1988. But after the withdrawal of all Soviet troops from Afghanistan was completed in February 1989, Pakistan’s “ISI drew up the battle plans and arranged the logistics, the intelligence and the communications,” for a March 7, 1989, attack from Pakistan by its Afghan Mujahideen units, according to Afghanistan: A Modern History.

Although the Mujahideen quickly “captured the government base of Samarkhel, 12 miles south-east of Jalalabad,” their march to the local airport “ran into heavy resistance.” As Afghanistan: A Modern History observed, “despite human wave assaults and a heavy bombardment of the city that cost over 2,000 mostly civilian lives, the Muhajideen could not advance any further. And in July 1989 the Afghan government military forces were able to easily retake its Samarkhel base, where they found that 70 captured Afghan army officers had been murdered by the ISI-organized Mujahideen.”

Without the support of any Soviet troops, the army of the Najibullah regime’s Afghan government in 1989 was also able to defend Jalalabad “against the most massive attack ever undertaken by the Mujahideen during the whole war,” according to Afghanistan: A Modern History.

And, despite a failed coup attempt by the Minister of Defense of the Afghan government regime in March 1990, Najibullah’s regime did not collapse until there was a successful 1992 Afghan military coup which, according to Dator Zayar’s October 2001 “Afghanistan: An Historical View” article, was “planned by the CIA and ISI” and “prepared the way for the capture of Kabul by the Islamic fundamentalists.”

Afghan President Najibullah then announced in early April 1992 that he would resign as part of a UN-brokered transition of power and “Kabul now became the scene for a power struggle between four main armed” Mujahadeen “groups,” according to Afghanistan: The Mirage of Peace by Chris Johnson and Jolyon Leslie.

By April 1992, the commanders of the various Mujahideen guerrilla groups were also deriving a major source of their personal income from Afghanistan’s lucrative drug trade. As Trinity College Professor and International Studies Program Director Vijay Prashad wrote in his “War Against The Planet” article that was posted on the CounterPunch website:

The opium harvest at the Pakistan-Afghan border doubled between 1982 and 1983 (575 tons), but by the end of the decade it would grow to 800 tons. On June 18, 1986, the New York Times reported that the Mujahideen “have been involved in narcotics activities as a matter of policy to finance their operations.”

…Mujahideen commanders inside Afghanistan personally controlled huge fields of opium poppies, the raw material from which heroin is refined. CIA-supplied trucks and mules, which had carried arms into Afghanistan, were used to transport some of the opium to the numerous laboratories along the Afghan-Pakistan border, whence many tons of heroin were processed with the cooperation of the Pakistani military. The output provided an estimated one-third to one-half of the heroin used annually in the United States and three-quarters of that used in Western Europe…”