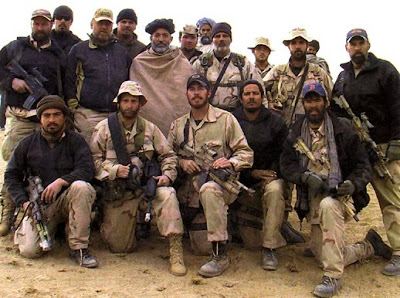 Ironically, despite Unocal and the Democratic Clinton Administration’s tacit support for a Taliban takeover of Afghanistan’s government prior to 1996, Taliban Leader “Mullah Omar’s government never had any intention of allowing U.S. firms to construct an oil pipeline,” according to Jean-Charles Brisard and Guillaume Dasquie’s Forbidden Truth.

So after Unocal’s pipeline deal with the Taliban government in Afghanistan fell through, the Administration of Secretary of State Clinton’s husband used the August 7, 1998 bombings — apparently by armed right-wing Islamic fundamentalist groups — of U.S. embassies in Kenya and Tanzania (which killed over 200 people) as its pretext to order the U.S. war machine’s initial bombing of Afghanistan on August 20, 1998.

From Pentagon warships in the Indian Ocean, 67 Tomahawk cruise missiles were launched which struck camps in Khost and killed 20 people in Afghanistan. The Clinton Administration then froze all U.S. assets of the Afghan government and banned all commercial and financial dealings with the Afghan government on July 6, 1999.

So soon after the January 2001 presidential inauguration of George W. Bush, negotiations between the Republican Bush II Administration and representatives of the Taliban regime’s Afghan government about reviving the proposed pipeline project in Afghanistan were apparently held between February and April 2001. And after an aide to Taliban leader Mullah Muhammad Omar met with the CIA in Washington, D.C. in March 2001, Secretary of State Colin Powell announced in April 2001 that the Bush II Administration was going to give $43 million in aid to the Taliban regime in Afghanistan, according to the November 19, 2001 issue of the Irish Times.

But when Taliban regime negotiators apparently refused to agree to the Bush II Administration’s proposals related to the pipeline project and the establishing of a new coalition government in Afghanistan at a July 2001 meeting in Berlin, a U.S. government representative at the meeting apparently “evoked the option of a military operation against Afghanistan,” according to Forbidden Truth.

What happened on September 11, 2001, in Downtown Manhattan and at the Pentagon was then used as a pretext by the Bush II Administration (and its Blair Administration military ally in the UK) to launch an October 7, 2001 aerial attack on all cities in Afghanistan — which killed 400 Afghan civilians during the first week of Pentagon bombing alone.

As Michael Parenti recalled in a December 2008 article, “in sum, well in advance of the 9/11 attacks the U.S. government had made preparations to move against the Taliban and create a compliant regime in Kabul and a direct US military presence in Central Asia” and “9/11… provided the perfect impetus, stampeding U.S. public opinion and reluctant allies into supporting military intervention.”

Yet as Chris Johnson and Jolyon Leslie’s Afghanistan: The Mirage of Peace observed, “there was no explicit agreement under international law for the USA to go to war,” in a now overt and direct way, against the people of Afghanistan on October 7, 2001.

But after the September 11, 2001 events, the Bush II Administration claimed it was morally justified for the U.S. War Machine to start bombing Afghanistan in October 2001 because Osama Bin Laden was “responsible” for what happened on September 11, 2001 in the United States . Yet as Guilles Dorronsoro’s Revolution Unending noted, “Bin Laden’s role in Afghan politics was minimal” in 2001.

Ironically, Osama Bin Laden (a multi-millionaire son of an extremely wealthy Saudi Arabian construction contractor) had apparently previously begun working in partnership with the CIA in Afghanistan in 1979 — the same year that the Democratic Carter Administration signed an official order that authorized its CIA to work for regime change in Afghanistan (by providing covert aid to the right-wing Afghan Islamic guerrilla fighters who were being trained by the Pakistani Inter-Service Intelligence [ISI] agency).

As Angelo Rasanayagam’s Afghanistan: A Modern History observed, “according to Milt Bearden, the CIA station chief in Pakistan in 1986 to 1989, Bin Laden and other fund-raisers for the Afghan jihad were bringing in between 20 and 25 million dollars a month from the Saudis and Gulf Arabs to underwrite the war” against the Soviet military-supported Afghan government.

During the same period when Unocal, the CIA, and the Clinton Administration were apparently supporting the Taliban group’s campaign to gain control of the Afghan government in the summer of 1996, Bin Laden also “reportedly contributed 3 million dollars to the Taliban war chest,” according to Forbidden Truth.

But although “the CIA gave Osama free rein in Afghanistan, as did Pakistani intelligence generally,” the “CIA seems to have… turned against its former partner Bin Laden in 1995 and 1996,” according to John Cooley’s Unholy Wars.

Coincidentally, between 1982 and 1997, the Bush II Administration’s Assistant Secretary of State for South Asian Affairs in 2001, Christine Rocca, had also “worked with the CIA as an agent reporting to the director of Intelligence Operations” and “in this capacity, for several years she coordinated relations between the CIA and the Islamic guerrillas, and supervised some of the deliveries of Stinger missiles to the Mujahideen fighters,” according to Forbidden Truthh.

Prior to the Bush II Administration’s illegal attack on Afghanistan in October 2001, the Minister of Foreign Affairs of the Taliban’s Afghan government proposed that Bin Laden just be deported from Afghanistan to another Muslim country and be placed under surveillance, since — as CNN reported on September 21, 2001- — “Bin Laden… denied he had anything to do with the attacks, and Taliban officials repeatedly said he could not have been involved in the attacks;” and the Bush II Administration failed to provide any international court with concrete evidence that Bin Laden had actually been “responsible” for what happened on September 11, 2001 in the United States. In addition, even the BBC News reported on October 5, 2001 that there was “no direct evidence in the public domain linking Osama Bin Laden to the 11 September attacks.”

Yet “the American government preferred to give the Taliban an ultimatum rather than negotiate, hence the refusal to provide any kind of proof of Bin Laden’s implication” in the September 11, 2001 events, according to Revolution Unending.

When the Taliban’s Afghan government refused (as anticipated) to accept the Bush II Administration’s illegal ultimatum to “hand over Bin Laden” (or the U.S. War Machine would attack Afghanistan and overthrow the Taliban regime) , the Pentagon (and its UK military junior partner) then began its “Operation Enduring Freedom” military campaign in Afghanistan (which was subsequently joined by soldiers from the military forces of other members of NATO) — that people in Afghanistan are still having to endure more than eight years later. And according to the Afghanistan: The Mirage of Peace book:

By the end of October 2001… there was a switch in strategy to carpet bombing of frontlines… Sub-atomic bombs were dropped on Taliban frontlines in the Shamal plains north of Kabul… In addition, a quarter of a million deadly bomblets were scattered from the cluster bombs that the USA dropped throughout the country…

The Bush II Administration then sent large numbers of U.S. ground troops to invade Afghanistan in late November 2001; and by the end of December 2001, the Pentagon had dropped over 12,000 bombs on Afghanistan.

Although the U.S. army refused “in principle” to estimate the number of Afghan civilian casualties created by the direct U.S. military intervention in Afghanistan by the end of 2001, it “probably amounted to several thousand,” according to Revolution Unending.