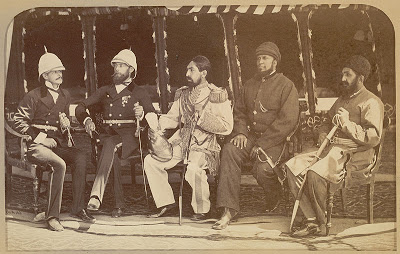 [If you’re a Rag Blog reader who wonders how the Pentagon ended up getting stuck “waist deep in the Big Muddy” in Afghanistan (to paraphrase a 1960s Pete Seeger song) — and still can’t understand, “what are we fighting for?” (to paraphrase a 1960s Country Joe McDonald song) — this 15-part “People’s History of Afghanistan” might help you debate more effectively those folks who still don’t oppose the planned June 2010 U.S. military escalation in Afghanistan? For “Part I: 1838-1876,” go here].

The Democratic Obama Administration’s Pentagon spent nearly a billion dollars in 2009 on the Afghan War contracts it awarded for construction projects that were mostly on U.S. military bases across Afghanistan. Yet most U.S. taxpayers still probably know little about the 19th-century history of people in Afghanistan or about the wars that were fought in Afghanistan during the 19th century.

After occupying Quetta in Baluchistan in 1876 and converting it into a military base, UK imperialism, for example, launched the Second Anglo-Afghan War by again invading Afghanistan. The UK government then replaced Sher Ali Khan as Afghanistan’s king by putting Sher Ali’s son, Yaqub Khan, on the Afghan throne. Yaqub Khan was then forced by the UK government to sign the Treaty of Gandamak in May 1879.

As a result of the 1879 Treaty of Gandamak, the feudalist monarchical regime agreed to let the UK government control Afghanistan ’s foreign affairs and establish UK diplomatic missions in Kabul and other Afghan cities. It also gave the British control of large areas of Afghanistan west of the Indus River in exchange for the UK government agreeing to now pay the new Afghan king, Yaqub Khan, an annual subsidy of 60,000 British pounds per year.

But, naturally, most Afghans who lived in Kabul did not support the terms of the May 1879 Treaty of Gandamak and were against giving the UK government so much special influence in Afghanistan . So in September 1879 the UK government’s diplomatic representative in Kabul was murdered “by mutinous Afghan soldiers who had been assigned to protect him,” according to Afghanistan: A Modern History by Angelo Rasanayagam.

In retaliation, a British general named Roberts moved his troops into Kabul on October 12, 1879, and forced Yaqub Khan to abdicate. Then General Roberts “became the virtual ruler of Kabul, instigating a rule of terror that was bitterly resisted” until “the British forces found themselves under siege,” by Afghan resistance fighters, according to the same book.

But after being defeated in open battle by Afghan resistance fighters on July 27, 1880, at Maiwand, near the Afghan city of Kandahar , UK troops were finally withdrawn from Afghanistan in April 1881, thus ending the Second Anglo-Afghan War.

Yet before withdrawing its troops, the UK government began supporting an Afghan feudal warlord, Abdur Rahman Khan, after Rahman had marched on Kabul and declared himself the new Afghan king in Charikar on July 20, 1880. In this way, the UK government insured that Afghanistan would continue to be a British protectorate whose foreign policy would be controlled by the UK government, instead of being a fully independent state.

Known as the “Iron Amir,” Afghan King Abdur Rahman ruled over people in Afghanistan in a repressive way. Afghanistan: A Modern History described how this British imperialist-backed monarch governed Afghanistan:

In almost continuous warfare during his 20-year reign, rebellions were punished by mass executions, or deportations, such as the forced resettlement of thousands of Ghilzai Pashtun tribesmen… He established a ruthless police force to subjugate suspected opponents and uncooperative officials.

Not surprisingly, the UK government whose special interests he served provided Rahman’s repressive regime in Afghanistan with “substantial supplies of arms and ammunition,” according to the same book. And, like the previous 19th-century Afghan kings, Abdur Rahman also was paid an annual subsidy by the UK government during his reign of nearly 20 years.

Between 1.2 million and 1.85 million Indian rupees per year were paid to Rahman between 1882 and 1901 by the UK government; and Rahman used a portion of his annual subsidy from the British imperialists to fund his recruitment of the Afghan troops he required to continue to rule the people of Afghanistan in an undemocratic way.

1 Response to Bob Feldman : A People’s History of Afghanistan / 2