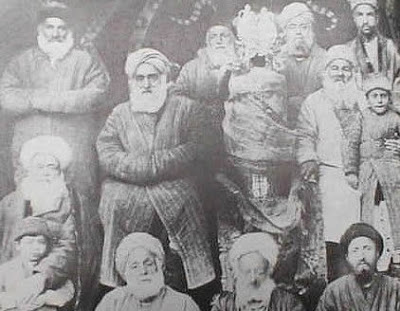 Jews in Afghanistan became increasingly pauperized because of government monopolization of foreign trade, and all but 3-4,000 had emigrated by the 1930’s. Image from The Embassy of Afghanistan.
Part 3: 1901-1924
A People’s History of Afghanistan

Yet — although many Afghans of Jewish religious background emigrated during the second half of the 19th century — in the early 20th century around 12,000 people of Jewish background still lived in Afghanistan. According to the 2007 edition of “Encyclopedia Judaica”:

The Jewish communities of Afghanistan were largely composed of… Meshed Jews… Economically, their situation in the last century was not unfavorable; they traded in skins, carpets, and antiquities…

Some of the wealthiest Afghans of Jewish background derived their wealth from having special economic interests in neighboring Czarist Russia. But after their foreign investments in Russia were nationalized by the revolutionary government in Russia following the October Revolution of 1917 and Afghan’s monarchical government began monopolizing the foreign trade which had previously been a source of wealth for Afghans of Jewish background, they became increasingly pauperized. So more of them then emigrated; and only between 3,000 and 4,000 people of Jewish background still lived in Afghanistan by the 1930s.

But after inheriting the Afghan throne in 1901, Abdur Rahman’s son, Habibullah Khan, was (like his father) paid an annual subsidy by the UK government — even after a 1905 treaty between Afghanistan and the UK removed the official right of the UK government to control Afghan foreign policy. And Habibullah controlled the Afghan government from 1901 until he was assassinated in February 1919.

During the reign of Afghan King Habibullah, some intellectual criticism of both UK imperialism and the nature of Afghan’s antiquated feudalist society in the early 1900s began to develop. A then-46-year-old Afghan intellectual named Mahmud Tarzi, for example, began to publish in 1911 a bi-monthly newspaper, Seraji-al-Akhbar, that “became a vehicle for his critical views on imperialism, the need for the modernization of Afghan society, and on the resistance to change of Muslim clerics” in Afghanistan, according to Angelo Rasanayagam’s Afghanistan: A Modern History.

Then, when Habibullah was assassinated after about 18 years on the Afghan throne, the son who succeeded him on the Afghan royal throne, Amanullah Khan, began to be advised by the anti-imperialist “Seraji-al-Akhbar” publisher-journalist Tarzi. Both Tarzi and the top Afghan army generals — whose support following his father’s murder enabled Amanullah to succeed his father as ruler — urged Afghan King Amanullah to proclaim the complete independence of Afghanistan on April 13, 1919.

But in response to this declaration of Afghanistan ’s independence, UK military forces bombed the Afghan monarchical government’s military encampment at Dakka on May 9, 1919, killing 20 to 30 Afghan soldiers and Afghan tribesmen. The Afghan monarchical government then declared war on UK imperialism on May 13, 1919; and on May 15, 1919 the Afghan War of Independence (a/k/a the Third Anglo-Afghan War) began.

After three columns of Afghan troops marched towards India (which was then still a colony of UK imperialism that also included what is now Pakistan and Bangla Desh), British military planes next began to bomb the Afghan cities of Jalalabad and Kabul . The Afghan War of Independence was then soon ended, in August 1919, by the Treaty of Rawalpindi, in which the UK government — despite dictating the terms of the treaty — again officially agreed to allow the Afghan government to control its own foreign affairs and officially recognized Afghanistan ’s independence.

During 1919, Amanullah also established a Council of Ministers and appointed Tarzi to be the Afghan government’s foreign minister. Four years later Amanullah also promulgated a new Afghan constitution that was modeled on the 1906 Persian/Iranian constitution, retained his position as King under the new constitution and attempted to institute some democratic reform and modernization internally in Afghanistan.

But Amanullah’s 1923 proposals for the emancipation of Afghan women, compulsory education for all Afghans, and coeducational schools in Afghanistan were opposed by Afghan’s religiously conservative tribal leaders. At the same time, the independent foreign policy pursued by Amanullah’s government — which had signed a friendship treaty with the government of the neighboring Soviet Union on February 28, 1921 — displeased the UK government.

So, according to the book The Truth About Afghanistan by S. Gevortom, the UK government then “hatched plots,” “resorted to such tried and tested means as bribing” Afghan “tribal chiefs and religious leaders and supplying arms and ammunition to” Afghan “tribes,” and “actively supported the extreme right of the Moslem clergy which was in opposition to Amanullah.”

British agents, in the spring of 1924, then “succeeded in organizing a major tribal uprising in Khosta, a region of Afghanistan bordering” on UK imperialism’s then-colony of India. The same book also noted:

The uprising spread to some other regions of Afghanistan . The insurgents demanded the repeal of progressive laws and reforms adopted by Amanullah’s government and insisted on a pro-British line in Afghan policy.”

Amanullah’s supporters within the Afghan army, however, were able to suppress this UK government-backed Afghan uprising of 1924. But Amanullah still lacked as strong an army or as strong a government bureaucracy as the Turkish leader Ataturk had at his disposal, when Ataturk was able to introduce some secular democratic reforms in Turkey (during this same historical period). So Amanullah was unable to immediately move forward with his democratic reform program, even after the 1924 revolt in Afghanistan was suppressed by his Afghan army supporters.